Glenomaru is a small settlement in The Catlins, an area of the southern South Island of New Zealand. [1] It is located 10 kilometres north of Owaka on the main road to Balclutha. On 7 July 1891, a branch line railway from the Main South Line in Balclutha was opened to Glenomaru, and the village remained the terminus of the line until it was extended to Tahora on 16 December 1895. [2] This line ultimately terminated in Tahakopa and was known as the Catlins River Branch. [2] It closed on 27 February 1971 and a sawmill now exists on the site of Glenomaru station, though some of the railway's old formation can be seen in the surrounding area and the Hunts Road tunnel is in the vicinity and can be walked. [3] 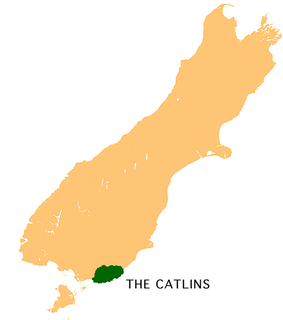 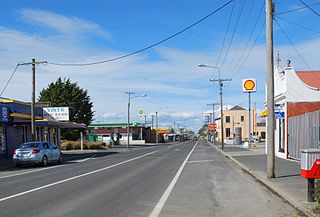 The Tokanui Branch, also known as the Seaward Bush Branch, was a branch line railway located in Southland, New Zealand. It diverged from the Bluff Branch south of the main railway station in Invercargill and ran for 54 kilometres in a southeasterly direction. Construction began in 1883 and it operated until 1966.

Romahapa is a locality in the Catlins region of Otago in New Zealand's South Island. It is located between the towns of Balclutha and Owaka. The last shop closed in 1977.

The Ōwaka River, until 2019 officially the Owaka River, flows southeastward through The Catlins, an area of the southern South Island of New Zealand. Its total length is 30 kilometres (19 mi), and it shares the estuary of the Catlins River, flowing into the Pacific Ocean at Pounawea, 28 kilometres (17 mi) south of Balclutha. Its source is on the slopes of Mount Rosebery, 12 kilometres (7.5 mi) south of Clinton. The Ōwaka River is located within the Clutha District.

The Catlins River flows southeastward through The Catlins, an area of the southern South Island of New Zealand. Its total length is 42 kilometres (26 mi), and it flows into the Pacific Ocean at the holiday settlement of Pounawea, 28 kilometres (17 mi) south of Balclutha. Its upper estuary is called Catlins Lake, and its lower estuary is shared with the Ōwaka River. The lower estuary is also known at Pounawea Estuary.

Kaka Point is a small town at the northern edge of The Catlins, an area of the southern South Island of New Zealand. It is located 14 km south of Balclutha and 8 km north of the headland of Nugget Point. It has a seasonally fluctuating population, and there are numerous cribs at the settlement. It has a permanent population of about 100. The settlement's best known resident was Māori poet Hone Tuwhare, who lived in Kaka Point for many years until his death in 2008. Kaka Point is named for the New Zealand kaka bird, whose signature call is "ka-aa." There is a restaurant, a motel, bed and breakfasts and a camping ground(s) there. http://www.lonelyplanet.com/new-zealand/the-catlins/things-to-do

Tahakopa is a small settlement in The Catlins, an area of the southern South Island of New Zealand. It is located 25 kilometres northeast of Waikawa on the Tahakopa River. On 17 February 1915, Tahakopa became the terminus of the Catlins River Branch railway and retained this status until the branch line was closed on 27 February 1971. From the line's opening until 12 August 1956, a railway locomotive depot was based in the village. The old station building and goods shed still stand today.

Clinton is a small town nestled in the rolling hills of South Otago, in New Zealand's South Island. Handy to the Catlins, Dunedin, Lawrence, Central Otago and Tapanui. It is located on State Highway 1 approximately halfway between Balclutha and Gore, and the Main South Line railway passes through the town.

Tahora, later also known as Parae, is a locality in the Otago region of New Zealand's South Island, about one kilometre north of Owaka located at the Ōwaka River. Previously on a railway line, Tahora was a request stop. Today, there is little trace of the settlement and only parts of the railway formation remains visible.

Otanomomo is a locality in the South Otago region of New Zealand's South Island. It is on the banks of the Clutha River, roughly six kilometres south of Balclutha. Nearby settlements include Finegand to the north, Paretai, Puerua, and Romahapa to the south, and Waitepeka to the west.