Beaumont is a small town in inland Otago, in the South Island of New Zealand.

Raes Junction is a small settlement in New Zealand, located at the intersection of State Highways 8 and 90, in the lower South Island. The highways which meet at the junction are the main routes to the Clutha valley for travellers from Dunedin and Invercargill respectively.

The Cook River / Weheka is in the South Island of New Zealand. The headwaters are from the La Perouse Glacier on the western flanks of the Southern Alps, and it flows west, then northeast, then northwest and into the Tasman Sea. Its tributaries include the Balfour River, fed by the Balfour Glacier, and the Fox River, fed by the Fox Glacier. Much of the river lies within the Westland Tai Poutini National Park. The river was renamed from Cook River to Cook River / Weheka as a result of the Ngai Tahu Claims Settlement Act 1998. 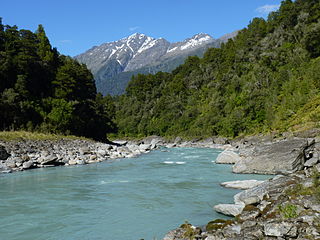 The Copland River is a river on the West Coast of the South Island of New Zealand. It flows for 20 kilometres (12 mi) from its headwaters in the Southern Alps to its confluence with the Karangarua River.

The Dobson River is a river in the South Island of New Zealand. It flows south between the Neumann and Ohau ranges for 45 kilometres (28 mi) from its source to the east of Mount Hopkins, in the Southern Alps, before joining with the Hopkins River, close to the latter's entry into the northern end of Lake Ohau in the Mackenzie Country. The river flows over wide shingle beds, and has no rapids of interest to whitewater enthusiasts. It was named by Julius von Haast in the 1860s for his father-in-law, Edward Dobson, who was the Canterbury Provincial Engineer.

The Eglinton River is located in the region of Southland in the southwest of New Zealand. It flows through Fiordland National Park for 50 kilometres (31 mi). Its headwaters are at Lake Gunn, 25 kilometres (16 mi) east of Milford Sound, and it flows generally south before entering Lake Te Anau along the lake's eastern shore opposite the entrance to North Fiord. 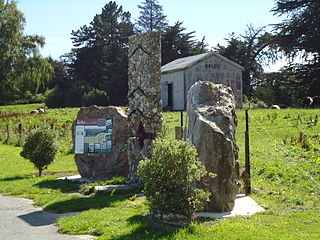 Kelso is an abandoned small settlement in Otago, New Zealand, located ten kilometres north of Tapanui on the Crookston Burn, close to its junction with the larger Pomahaka River. Its population during the 1960s and 1970s was close to 300, with most of its economy based on sheep farming. A small dairy factory was a focal point in the village's early years.

The Beaumont River is a river in the Central Otago district of New Zealand. It is a tributary of the Clutha River, merging with it just upstream of the small town of Beaumont.

The Cust River is a river in the Canterbury region of New Zealand. It flows east across the upper Canterbury Plains from its source north of the town of Oxford, New Zealand, flowing into the Cam River / Ruataniwha close to the town of Rangiora. The small town of Cust lies on the banks of the river. The lower part of the river, to the south-west of Rangiora, is diverted into a channel and called the "Main Drain". The channel was built in 1862 to drain the swampy land between Rangiora and the Waimakariri River, and when it was enlarged in 1868 it accidentally captured the Cust.

The Douglas River, formerly known as the Twain, is a river of the West Coast of New Zealand's South Island. Its source is high in the Southern Alps, five kilometres south of Mount Sefton, and its upper reaches are fed by water from the Douglas Glacier. It flows west for 18 kilometres, joined by runoff from the Horace Walker Glacier, before joining the waters of the Karangarua River. The Douglas River's entire course is within Westland Tai Poutini National Park. The river and glacier are named after Charles Edward Douglas, a 19th-century explorer and mountaineer.

The Hall River is a river on the West Coast of New Zealand. It drains Lake Paringa, flowing north to the Paringa River, which drains into the Tasman Sea.

The Teviot River is a river in New Zealand, a tributary of the Clutha River.

The Fox River is a river in the Westland District of New Zealand. It arises in two places; from a spring in the Fox Range, and from the head of the Fox Glacier. It runs west into the Cook River/Weheka, shortly before it exits into the Tasman Sea.

Scott Keltie Glacier is a very small glacier discharging into Robertson Bay between Penelope Point and Egeberg Glacier, on the north coast of Victoria Land. First charted by the British Antarctic Expedition, 1898–1900, under C.E. Borchgrevink. He named it for Sir John Scott Keltie, Secretary of the Royal Geographical Society.

Lauder is a small settlement in the Otago Region of the South Island of New Zealand. It is located in Central Otago, 8 km northeast of Omakau, on the main route between Alexandra and Ranfurly, State Highway 85. The settlement was named after the town of the same name in southern Scotland, one of many Otago sites to be named after places in the Scottish borders by John Turnbull Thomson.

Crookston is a small rural settlement in West Otago, in the South Island of New Zealand. It is located on SH 90 between Tapanui and Edievale, and lies 6 km east of Heriot.