Henty Highway is a rural highway in western Victoria, Australia. It is primarily a north-south route, consisting of a mix of dual-lane, single-carriageway country highway and four-lane arterial road within some of the larger towns along the route. It was named in honour of Edward Henty, a British colonist regarded as the first permanent European settler of the Port Phillip District (in what later became the Colony of Victoria), in the town eventually named Portland.

The passing of the Highways and Vehicles Act of 1924 [2] through the Parliament of Victoria provided for the declaration of State Highways, roads two-thirds financed by the State government through the Country Roads Board (later VicRoads). The Henty Highway was declared a State Highway in August 1938, [3] cobbled together from roads between Mildura, Warracknabeal, Horsham, and Hamilton to Portland (for a total of 263 miles); before this declaration, these roads were referred to as Mildura Road, Hopetoun(-Lascelles) Road, Hopetoun-Warracknabeal Road, Hamilton-Horsham Road and Hamilton-Portland Road. [4] It originally started from the Calder Highway in Nunga, the junction south of Ouyen; when the North-Western Highway was renamed Sunraysia Highway on 11 September 1972, and extended from Lascelles to Nunga, the Henty Highway was truncated back to Lascelles. [5] The southern end of the highway through Portland was changed in January 1987: from New and Percy and Gawler Streets terminating at the intersection of Gawler, Cliff and Bentick Streets in central Portland, to its current alignment along Port Road and the southern section of Portland-Nelson Road to the intersection with Wellington Road in Portland's southern suburbs. [6]

The passing of the Road Management Act 2004 [8] granted the responsibility of overall management and development of Victoria's major arterial roads to VicRoads: in 2013, VicRoads re-declared the road as Henty Highway (Arterial #6620) between the Sunraysia Highway in Lascelles and Madeira Packet Road at Portland. [9]

Mildura is a regional city in north-west Victoria, Australia. Located on the Victorian side of the Murray River, Mildura had a population of 34,565 in 2021. When nearby Wentworth, Irymple, Nichols Point and Merbein are included, the area had an estimated urban population of 51,903 at June 2018, having grown marginally at an average annual rate of 0.88% year-on-year over the preceding five years. It is the largest settlement in the Sunraysia region. Mildura is a major horticultural centre notable for its grape production, supplying 80% of Victoria's grapes. Many wineries also source grapes from Mildura. It is very close to the New South Wales border.

Nepean Highway runs south from St Kilda Junction in Victoria, Australia to Portsea, close to the eastern shore of Port Phillip. It is the primary road route to central Melbourne from Melbourne's southern suburbs. 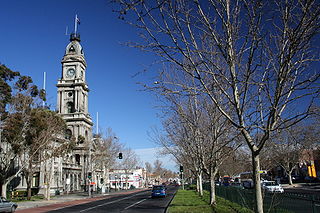 Hoddle Highway is an urban highway in Melbourne linking CityLink and the Eastern Freeway, itself a sub-section of Hoddle Main Road. Both these names are not widely known to most drivers, as the entire allocation is still best known as by the names of its constituent parts: Hoddle Street, Punt Road and Barkly Street. This article will deal with the entire length of the corridor for sake of completion, as well to avoid confusion between declarations.

The Monash Freeway is a major urban freeway in Victoria, Australia, linking Melbourne's CBD to its south-eastern suburbs and beyond to the Gippsland region. It carries up to 180,000 vehicles per day and is one of Australia's busiest freeways. The entire stretch of the Monash Freeway bears the designation M1.

Calder Highway is a rural highway in Australia, linking Mildura and the Victoria/New South Wales border to Bendigo, in North Central Victoria. South of Bendigo, where the former highway has been upgraded to freeway-standard, Calder Freeway links to Melbourne, subsuming former alignments of Calder Highway; the Victorian Government completed the conversion to freeway standard from Melbourne to Bendigo on 20 April 2009.

Maroondah Highway is a major east–west thoroughfare in the eastern suburbs of Melbourne, and a highway connecting the north-eastern fringes of Melbourne to the lower alpine region of Victoria, Australia.

The Western Highway is the Victorian part of the principal route linking the Australian cities of Melbourne and Adelaide, with a length of approximately 258 kilometres (160 mi) of single carriageway, then 161 kilometres (100 mi) of dual carriageway known as the Western Freeway. It is a part of the National Highway network and designated routes A8 and M8. The western end continues into South Australia as the Dukes Highway, the next section of the Melbourne–Adelaide National Highway. The Western Freeway joins Melbourne's freeway network via the Western Ring Road, in the western suburbs of Melbourne. 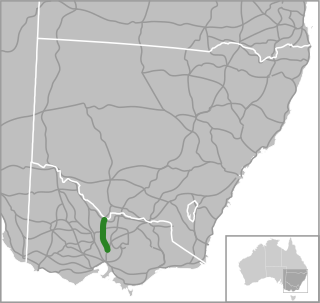 The Sunraysia Highway is a 344 kilometres (214 mi) arterial north-south route in western Victoria. The highway extends north a length of 331 km starting from the Western Freeway near Ballarat to the Calder Highway near Ouyen. It is the north-west arterial road, linking Ballarat and Ouyen, and acts as a secondary route to the Calder Highway), the primary route between Melbourne and Mildura.

The Murray Valley Highway is a 663-kilometre (412 mi) state highway located in Victoria and New South Wales, Australia. The popular tourist route mostly follows the southern bank of the Murray River and effectively acts as the northernmost highway in Victoria. For all but the western end's last three kilometres, the route is designated as B400.

The Borung Highway is a 138 kilometre rural highway in western Victoria running in a west–east direction from Dimboola in the west to Charlton in the east. The highway serves little more than connectivity between local communities, and is busiest between the towns of Donald and Charlton. The more notable features along the highway exist in the pastoral scenery, and the surprising appearance of lakes amongst the rolling hills. Buloke trees, are a regular feature along the eastern segment of the road.

The Dandenong Valley Highway is an urban highway stretching almost 40 kilometres from Bayswater in Melbourne's eastern suburbs to Frankston in the south. This name covers many consecutive streets and is not widely known to most drivers, as the entire allocation is still best known as by the names of its constituent parts: Stud Road, Foster Street, Dandenong-Frankston Road, Dandenong Road West and Fletcher Road. This article will deal with the entire length of the corridor for sake of completion, as well to avoid confusion between declarations. 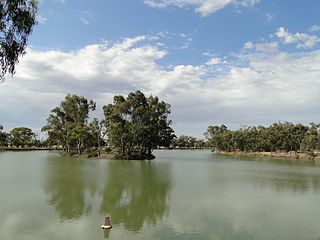 The Yarriambiack Creek, an inland intermittent watercourse of the Wimmera catchment, is located in the Wimmera region of the Australian state of Victoria. Rising on the northern slopes of the Great Dividing Range, the Yarriambiack Creek flows generally north and drains into Lake Coorong, one of a series of ephemeral lakes, northeast of Hopetoun.

Bellarine Highway is a main arterial highway that runs east from Geelong in Victoria along the Bellarine Peninsula to Queenscliff. The highway also provides the main route to Barwon Heads and Ocean Grove, localities along the southern coast of the peninsula.

The Great Alpine Road (B500) is a country tourist road in Victoria, Australia, running from Wangaratta in the north to Bairnsdale in the east, and passing through the Victorian Alps. The road was given its current name because it was considered the mountain equivalent to Victoria's world-famous Great Ocean Road in the south-west of the state. The road usually remains open during winter; however, vehicles travelling between Harrietville and Omeo are required to carry diamond-pattern snow chains during the declared snow season.

The Midland Highway is a major rural highway linking major towns in Victoria, beginning from Geelong and winds through country Victoria in a large arc through the cities of Ballarat, Bendigo and Shepparton, eventually reaching Mansfield at the foothills of the Victorian Alps.

Pyrenees Highway is a rural highway in western Victoria, Australia, linking Glenelg Highway in Glenthompson to Calder Highway in Elphinstone. It intersects with the region's major road freight route, Western Highway in Ararat, in addition to Midland Highway in Castlemaine and Sunraysia Highway in Avoca. It was named after the Pyrenees ranges the highway runs through. This name covers many consecutive roads which are not widely known to most drivers except for the easternmost section, as the entire allocation is best known by the name of its last constituent part: Maroona-Glenthompson Road, Mortlake-Ararat Road and Pyrenees Highway proper. This article will deal with the entire length of the corridor for sake of completion, as well to avoid confusion between declarations.

Warrigal Road is a major inner urban road in southeastern Melbourne, Australia. On weekdays, it is heavily trafficked as it runs through many major suburbs along its route, traversing some of Melbourne's eastern and south-eastern suburbs. These suburbs include Chadstone, Oakleigh, and Cheltenham. The Chadstone Shopping Centre can be accessed directly from Warrigal Road at its eastern entrance.

Wimmera Highway is a 345 kilometre highway that connects the towns of Marong, Victoria and Naracoorte, South Australia, through the major junctions of Sunraysia Highway, Henty Highway and Western Highway.

State (Bell/Springvale) Highway, also known as Bell Street/Springvale Road State Highway, is the longest self-contained urban highway in Melbourne, Australia, linking Tullamarine Freeway and Nepean Highway through Melbourne's north-eastern suburbs. These names are not widely known to most drivers, as the entire allocation is still best known as by the names of its constituent parts: Bell Street, Banksia Street, Manningham Road, Williamsons Road, Doncaster Road, Mitcham Road, Springvale Road and Edithvale Road. This article will deal with the entire length of the corridor for sake of completion, as well to avoid confusion between declarations.