Hydrotaea is a genus of insects in the housefly family, Muscidae. They occur in most regions of the world but are more populous in warmer climates. They are often found on feces in summer months, and are therefore generally found in close proximity to livestock. Among the 130 known species in this genus, one of the most commonly recognized is the dump fly. [3]

Along with many others genera in the family, Hydrotaea is of forensic importance in both the economic and public health scene. Flies in general are considered by many authorities to be the most important insects involved in human and veterinary medicine. [4] Certain Hydrotaea species have been proven to carry and transmit certain diseases to warm blooded animals, including humans. [5] Researchers continue to monitor these vectors of disease as they have been connected with the spread of mastitis. [6]

Larvae of this genus are often dimorphic obligate carnivores. The second and third instars are predators, and the first is also carnivorous in some species. Some species have cannibalistic final instars. The smallest larvae are under 6 mm [9] and the largest are up to 16 mm. [10] The abdomen has ventral welts and large spiracles with sinuate slits. [3]

Adults commonly feed on the blood of mammals. They are able to reopen wounds that are almost completely healed. Mouthpart morphology in the genus ranges from sponging mouthparts to mouths with rasping teeth. Many species have enlarged prestomal teeth. The metathoracic spiracle is covered in long, thick setae. [10] The average male Hydrotaea is 6.5-8.5 mm and the average female is 5.75-7.5 mm. They are very light brown to bluish black with large, red eyes and plumose antennae.

Flies in this genus are found in the warmer parts of North and South America, Europe, Asia, and Australia. They are most commonly found in urban settings. They are attracted to fermentation and are often found in vegetation, feces, and decomposing carcasses, mainly those dead longer than ten days. [3]

The life cycle of Hydrotaea rostrata has been studied in the field of forensic entomology. Mature flies seek out decay, preferably in material that has been dead for an extended amount of time. Masses of maggots, which are often characteristic of other species of flies, are not typical of H. rostrata. The larvae of this species progress through three stages, or instars, which are then followed by the formation of a pupa. The adult fly emerges from the pupa. The developmental process from egg to adult takes between 518.4 and 1555.6 hours, according to one study in Australia. Development is more rapid in warmer temperatures of 19–30 °C (66–86 °F). In cooler temperatures of 12–18 °C (54–64 °F), development may take up to 64.5 days. [11]

The larvae of another species, the black dump fly (H. aenescens), inhabit fecal material and consume other larvae, including those of Musca domestica , the housefly. [12] [13] The black dump fly is commercially available for use in housefly control. [12] It is also useful in forensics, as it may inhabit corpses. [14]

Some larvae are able to seek shelter underground in cold conditions. [5]

Research has incriminated Hydrotaea irritans as a vector of summer mastitis, a bovine infection that can be caused by multiple suspected bacteria. [6] The research allowed flies inoculated with select bacteria from a sample representing summer mastitis to come in contact with the udders of cattle. The bacteria appeared in some of the cows and on the bodies of just over a third of the doctored flies. The evidence indicates that H. irritans transmits the bacterial species Staphylococcus aureus , Streptococcus dysgalactiae , Streptococcus uberis , Streptococcus agalactiae , Arcanobacterium pyogenes , Peptostreptococcus indolicus , and Fusobacterium necrophorum . [6]

H. irritans attacks many other warm-blooded animals, including humans. [5]

Hydrotaea species have been helpful in forensic cases worldwide by indicating post-mortem interval (PMI). [14] These flies typically inhabit a carcass 4 to 5 months after the start of decomposition. [9] Their presence indicates that the corpse was not burned and that the earlier blow-fly phase has ended. [16] Hydrotaea larvae may feed on each other and on other flies, such as blow-flies. [9]

Hydrotaea can be used to identify drugs and to determining whether a body was relocated. Hydrotaea spinigera can make up 70% of the muscid fly population on a corpse in forested habitat. [17] Hydrotaea rostrata may arrive at a decomposing body on the second day of decay, and may stay up to 34 days or until the body is skeletonized. [18] 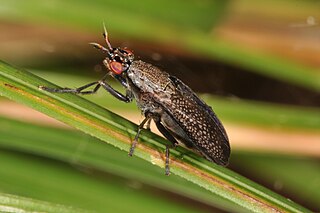 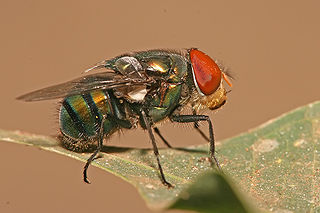 The Calliphoridae are a family of insects in the order Diptera, with almost 1,900 known species. The maggot larvae, often used as fishing bait, are known as gentles. The family is known to be polyphyletic, but much remains disputed regarding proper treatment of the constituent taxa, some of which are occasionally accorded family status.

Stomoxys calcitrans is commonly called the stable fly, barn fly, biting house fly, dog fly, or power mower fly. Unlike most members of the family Muscidae, Stomoxys calcitrans and others of its genus suck blood from mammals. Now found worldwide, the species is considered to be of Eurasian origin. 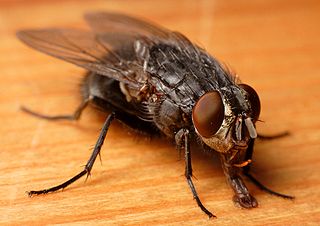 Calliphora is a genus of blow flies, also known as bottle flies, found in most parts of the world, with the highest diversity in Australia. The most widespread species in North America area Calliphora livida, C. vicina, and C. vomitoria. 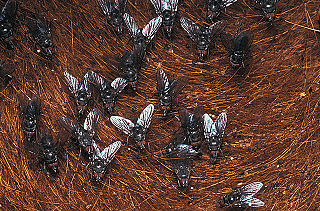 Haematobia irritans, the horn fly, is a small fly. It was first described by Carl Linnaeus in his 1758 10th edition of Systema Naturae. It is of the genus Haematobia which is the European genus of bloodsucking flies. Haematobia irritans is a native of Europe but has been introduced to North America and is considered a potentially dangerous livestock pest.

Musca is a genus of flies. It includes Musca domestica, as well as Musca autumnalis. It is part of the family Muscidae.

Lucilia is a genus of blow flies in the family Calliphoridae. Various species in this genus are commonly known as green bottle flies.

Fannia is a very large genus of approximately 288 species of flies. The genus was originally described by the French entomologist Jean-Baptiste Robineau-Desvoidy in 1830. A number of species were formerly placed in the genus Musca.

Muscini is a Tribe of flies from the family Muscidae.

The housefly is a fly of the suborder Cyclorrhapha. It is believed to have evolved in the Cenozoic Era, possibly in the Middle East, and has spread all over the world as a commensal of humans. It is the most common fly species found in houses. Adults are gray to black, with four dark, longitudinal lines on the thorax, slightly hairy bodies, and a single pair of membranous wings. They have red eyes, set farther apart in the slightly larger female.

Muscina is a genus of flies that belongs to the family Muscidae, currently consisting of 27 species. They are worldwide in distribution and are frequently found in livestock facilities and outside restrooms. The most common species are M. stabulans, M. levida, and M. prolapsa. Muscina flies commonly breed in manure and defecate on food, which has been linked to the spread of some disease and illnesses. The occurrence of Muscina larvae on dead bodies has led to their regular use in forensic investigations, as they may be used to estimate the time of death. Research have shown the prevalence of certain species of Muscina flies as vectors of diseases such as poliomyelitis. 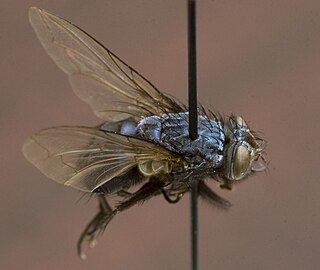 Calliphora livida is a member of the family Calliphoridae, the blow flies. This large family includes the genus Calliphora, the "blue bottle flies". This genus is important in the field of forensic entomology because of its value in post-mortem interval estimation.

Coenosia is a very large genus of true flies of the family Muscidae.

Mydaea is a large genus from the fly family Muscidae.

Anthomyia is a genus of flies in the family Anthomyiidae. They look rather like small houseflies, but commonly have conspicuous black-and-white patterning. This appears to be a mild form of aposematic coloration, though they do not appear to be distasteful unless they have eaten something offensive to the predator and have loaded their guts with it.

Ephydrinae is a subfamily of shore flies in the family Ephydridae.