FIH was founded on 7 January 1924 in Paris by Paul Léautey, who became the first president, in response to field hockey's omission from the programme of the 1924 Summer Olympics. [3] First members complete to join the seven founding members were Austria, Belgium, Czechoslovakia, France, Hungary, Spain and Switzerland.

In 1982, the FIH merged with the International Federation of Women's Hockey Associations (IFWHA), which had been founded in 1927 by Australia, Denmark, England, Ireland, Scotland, South Africa, the United States and Wales.

The organisation is based in Lausanne, Switzerland since 2005, having moved from Brussels, Belgium.

In total, there are 138 member associations within the five confederations recognised by FIH. This includes Great Britain which is recognised as an adherent member of FIH, the team was represented at the Olympics and the Champions Trophy. England, Scotland and Wales are also represented by separate teams in FIH sanctioned tournaments.

The FIH World Rankings was updated once after the major tournament finished, based on FIH sanction tournaments.

The Player of the Year Awards have been given annually since 1998 for men and women, while the young category was added in 2001 to honour the best performances for junior players (under 21).

Another award, the "Honorary Award", was given to people who have made outstanding contributions to field hockey.

The following are the partners of the International Hockey Federation: [4]

The Australia women's national field hockey team are, as of January 2019, ranked third in the world. Having played their first game in 1914, and their first Olympic game in 1984 they are one of Australia's most successful sporting teams, boasting three Olympic gold medals, two World Cup gold medals and four Commonwealth Games gold medals. The Hockeyroos have been crowned Australia's Team of the Year five times and were unanimously awarded Best Australian Team at the 2000 Sydney Olympic Games.

The Scotland women's national field hockey team represents Scotland in international women's field hockey competitions, with the exception of the Olympic Games when Scottish players are eligible to play for the Great Britain women's national field hockey team as selected. Scotland recently participated in the inaugural season of the FIH Hockey World League, but were knocked out in round 2, failing to qualify for the 2014 Hockey World Cup in The Hague, Netherlands. As of November 2015 they are seventeenth in the FIH outdoor world rankings.

The Women's Hockey World Cup is the field hockey World Cup competition for women, whose format for qualification and the final tournament is similar to the men's. It has been held since 1974. The tournament has been organized by the International Hockey Federation (FIH) since they merged with the International Federation of Women's Hockey Associations (IFWHA) in 1982. Since 1986, it has been held regularly once every four years, in the same year as the men's competition, which is mid-cycle between Summer Olympic games. 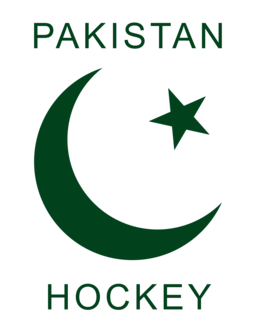 The Pakistan national field hockey team is administered by the Pakistan Hockey Federation (PHF), the governing body for hockey in Pakistan. They have been a member of the International Hockey Federation (FIH) since 1948 and founding member of the Asian Hockey Federation (ASHF) which formed in 1958. Pakistan is the most successful national field hockey team in the Hockey World Cup with four championships: 1971, 1978, 1982 and 1994. Pakistan also has the best overall performance in World Cup history in both proportional and absolute terms with 53 victories in 84 matches played, seven time draws, six appearances in the finals and only 24 losses. Pakistan national team has played in all FIH World Cup editions with only one absence in 2014. The green shirts is also one of the most successful national teams in the Asian Games with eight gold medals: 1958, 1962, 1970, 1974, 1978, 1982, 1990 and 2010, the highest number of times a country has come first, and the only Asian team to have won the prestigious Champions Trophy with three championships: 1978, 1980 and 1994. Pakistan have won a total of 29 official international titles to professional and grassroots level selections, with three gold medals in the Olympic Games field hockey tournaments in Rome 1960, Mexico City 1968 and Los Angeles 1984. However, Pakistan could not qualify for Olympics since 2012.

The Men's Hockey Asia Cup is a men's international field hockey tournament organized by the Asian Hockey Federation. The winning team becomes the champion of Asia and qualifies for the FIH Hockey World Cup.

The European Hockey Federation is a European sports federation for field hockey, based in Brussels. It is the umbrella organisation for all European national federations and organises the Euro Hockey League. Marijke Fleuren was elected as president on 22 August 2011.

The Asian Hockey Federation is the governing body for the sport of field hockey in Asia. It now has 31 member associations. It is affiliated to the International Hockey Federation (FIH). The current president is Al-Sultan Abdullah Sultan Ahmad Shah. 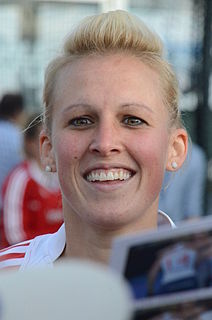 Alexandra "Alex" Mary Louise Danson, is a retired English international field hockey player who played as a forward for England and Great Britain.

African Hockey Federation (AfHF) is the continental governing body of field hockey in Africa. It is affiliated by International Hockey Federation and has 25 member nations. It bi-annually organizes Hockey African Cup for Nations, a men's and women's hockey tournament for African nations. The main objective of the organization is to make the game of hockey popular in Africa and to increase number of participants.

Katie Ruth Allen is an Australian field hockey player. She was a member of the Australia women's national field hockey team that won gold medals at Commonwealth Games, Olympic Games and World Cup in the late 1990s and early 2000s. She is a past FIH World Player of the Year. 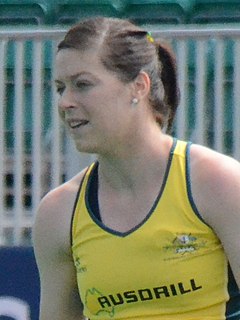 Karri McMahon is an Australian field hockey player for the Hockeyroos who plays as a defender.

Tim Pullman is an international field hockey umpire from Australia who has officiated over 150 international games since his debut in 1999 including two consecutive Summer Olympics. Prior to umpiring he represented South Australia as a field hockey player from junior through to the National League competition.

This article contains lists of achievements in major senior-level international field hockey and indoor field hockey tournaments according to first-place, second-place and third-place results obtained by teams representing different nations. The objective is not to create combined medal tables; the focus is on listing the best positions achieved by teams in major international tournaments, ranking the nations according to the most podiums accomplished by teams of these nations.

The Women's Hockey Asia Cup is a women's international field hockey tournament organized by the Asian Hockey Federation. The winning team becomes the champion of Asia and qualifies for the FIH Hockey World Cup.

Anneke Franziska Böhmert is a former field and indoor hockey player from Germany, who played as a midfielder.