The Journal of Applied Behavior Analysis (JABA) is a quarterly peer-reviewed academic journal which publishes empirical research related to applied behavior analysis. It was established in 1968 and is published by Wiley-Blackwell on behalf of the Society for the Experimental Analysis of Behavior. The editor-in-chief is Linda A LeBlanc.

Common areas of research in JABA include: functional analysis and treatment of severe behavior disorders, classroom instruction in secondary and higher education, early behavioral interventions for children with autism, voucher-based contingency management in the treatment of substance abuse, and pediatric feeding therapy. [2]

Applied behavior analysis (ABA), also called behavioral engineering, is a behavioural therapy concerned with applying empirical approaches based upon the principles of respondent and operant conditioning to change behavior of social significance. It is the applied form of behavior analysis; the other two forms are radical behaviorism and the experimental analysis of behavior.

The Journal of Behavioral Finance is a quarterly peer-reviewed academic journal that covers research related to the field of behavioral finance. It was established in 2000 as The Journal of Psychology and Financial Markets. The founding Board of Editors were Brian Bruce, David Dreman, Paul Slovic, Nobel Laureate Vernon Smith and Arnold Wood. The editor-in-chief was Gunduz Caginalp (2000-2005), Brian Bruce is the current editor.

The Flavour and Fragrance Journal is a bimonthly peer-reviewed scientific journal published since 1985 by John Wiley & Sons. It publishes original research articles, reviews and special reports on all aspects of flavour and fragrance. The current Editor-in-Chief is Kerstin Steiner.

The Milbank Quarterly is a quarterly peer-reviewed healthcare journal covering health care policy. It was established in 1923 and is published by John Wiley & Sons on behalf of the Milbank Memorial Fund, an endowed national foundation funded by Elizabeth Milbank Anderson that supports research of issues related to population health and health policy. It covers topics such as the impact of social factors on health, prevention, allocation of health care resources, legal and ethical issues in health policy, health and health care administration, and the organization and financing of health care.

The Journal of Educational and Behavioral Statistics is a peer-reviewed academic journal published by SAGE Publications on behalf of the American Educational Research Association and American Statistical Association. It covers statistical methods and applied statistics in the educational and behavioral sciences. The journal was established in 1976 as the Journal of Educational Statistics and obtained its current name in 1994. The journal's editors are Li Cai (University of California, Los Angeles) and Daniel McCaffrey.

The International Journal for the Psychology of Religion is a peer-reviewed academic journal devoted to research on the psychology of religion. Its scope includes the social psychology of religion, religious development, conversion, religious experience, religion and social attitudes and behavior, religion and mental health, and psychoanalytic and other theoretical interpretations of religion. The current editor-in-chief is Heinz Streib . As of 2020, the book review editors were Katarzyna Skrzypińska and W. Paul Williamson.

Health Education & Behavior is a bimonthly peer-reviewed healthcare journal covering applied behavioral and social science in public health published by SAGE Publications. It is an official journal of the Society for Public Health Education (SOPHE).

The Journal of Sociolinguistics is a peer-reviewed academic journal that covers topics in sociolinguistics. Its scope encompasses a wide range of languages treated from a multidisciplinary point of view. It was established in 1997 and appears four times a year. It is published by Wiley-Blackwell and the current editor in chief is Monica Heller (sociolinguist),(University of Toronto).

Applied Linguistics is a peer-reviewed academic journal in the field of applied linguistics established in 1980 and published by Oxford University Press. It appears six times a year. Current editors in chief are Christina Higgins and Anna Mauranen. 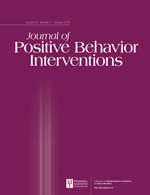 Journal of Positive Behavior Interventions is a peer-reviewed academic journal that publishes papers in the field of Education. The journal's editors are Lee Kern and Kathleen Lane. It has been in publication since 1999 and is currently published by SAGE Publications in association with The Hammill Institute on Disabilities.

The Journal of International Financial Management & Accounting is a triannual peer-reviewed academic journal published by John Wiley & Sons. It covers the international aspects of financial management, banking, financial services, auditing, and taxation. The editors-in-chief are Sidney Gray and Richard Levich.

The International Journal of Aviation Psychology is a quarterly peer-reviewed academic journal covering research on the "development and management of safe, effective aviation systems from the standpoint of the human operators." It draws on aspects of the academic disciplines of engineering and computer science, psychology, education, and physiology. It was established in 1991 and is published by Taylor and Francis on behalf of the Association of Aviation Psychology. The editor-in-chief is Dennis B. Beringer.

Depression and Anxiety is a monthly peer-reviewed medical journal published by Wiley-Blackwell. It is an official journal of the Anxiety and Depression Association of America and covers research on depressive and anxiety disorders. The editor-in-chief as of July 1, 2017 is Murray B. Stein. The journal was established in 1993 as two separate journals: Depression and Anxiety, which were merged in 1996 under the current title.

Autism Research is a bimonthly peer-reviewed medical journal covering research on autism and other pervasive developmental disorders. It was established in 2008 and is the official journal of the International Society for Autism Research. It is published by Wiley-Blackwell and the editor-in-chief is Anthony J. Bailey.

Personal Relationships is a quarterly peer-reviewed academic journal published by John Wiley & Sons on behalf of the International Association for Relationship Research. It covers research on all aspects of personal relationships, using methods from social psychology, sociology, communication studies, anthropology, family studies, developmental psychology, social work, and gerontology. It was established in 1994 by Cambridge University Press and the editor-in-chief is Ashley K. Randall.

The Journal of Risk Research is a peer-reviewed academic journal covering all aspects of risk analysis, communication, judgment, and decision-making. It was established in 1998 and is published by Routledge. The editor-in-chief is Ragnar Löfstedt. The Managing Editor is Jamie Wardman. It is the official journal of the European and Japanese sections of the Society for Risk Analysis.

Brain and Behavior is a monthly peer-reviewed open access scientific journal covering neurology, neuroscience, psychology, and psychiatry. It was established in 2011 and is published by Wiley-Blackwell. The editor-in-chief is Nutan Sharma.

The International Journal of Psychology is a bimonthly peer-reviewed academic journal covering all aspects of psychology. It was established in 1966 by Paul Fraisse, and is published by Wiley-Blackwell on behalf of the International Union of Psychological Science. The editor-in-chief is Abigail H. Gewirtz.

A consecutive controlled case series (CCCS) is a clinical study that involves aggregating multiple cases consecutively encountered wherein an experimentally controlled single-case experimental design was employed with each case. The CCCS design differs from the consecutive case series, because the latter reports on multiple cases where experimental control was not demonstrated, usually because a pre-post non experimental design was used. In contrast, a CCCS includes only cases where the intervention was evaluated using single-case experimental designs, such as a reversal design, where experimental control is demonstrated through the replication of treatment effects for each individual participant. Thus, the CCCS design has better internal validity than a consecutive case series. The CCCS design also address some concerns about the external validity or generality of findings of small-n single-case experimental design studies because it explicitly includes all cases encountered, regardless of outcome. By including all cases, any bias favoring a particular outcome in controlled for, resulting in stronger external validity relative to studies describing fewer cases that were not consecutively encountered. Moreover, when a large number of individuals are included in the series, this provides opportunities to identify variables that may predict treatment outcomes. Consecutive controlled case-series studies examining behavior analytic interventions of late have examined functional communication training. schedule thinning during functional communication training, and functional analysis and treatment using caregivers.