Just One of Those Things (song)

"Just One of Those Things" is a popular song written by Cole Porter for the 1935 musical Jubilee .

Porter had written the score for Jubilee while on an extended sea cruise in the early part of 1935: however, in September 1935 while he was visiting a friend's farm in Ohio with Jubilee's librettist Moss Hart, the latter mentioned that the play's second act required an additional song, and Porter had "Just One of Those Things" completed by the following morning (he had previously used the title for a song intended for but not featured in the 1930 musical The New Yorkers —apart from the title the two songs are distinct). [1] Porter's original lyric lacked an adjective for the line "a trip to the moon on gossamer wings": "gossamer" would be suggested by his friend, Ed Tauch. [2]

A recording by Richard Himber reached the charts of the day in 1935 and Peggy Lee's stylized arrangement of the song was a No. 14 hit in the Billboard charts in 1952. [3]

In 1958, Polly Bergen and guests Dick Van Dyke and Carol Haney performed "Just One of Those Things" on her short-lived NBC variety show, The Polly Bergen Show. [14] Also on television, Diana Dors plays a nightclub singer who sings the song in the 1963 "Run for Doom" episode of The Alfred Hitchcock Hour.

In 2019, actress Helena Bonham Carter performed a rendition of the song in the third-season premiere of The Crown, while her character, Princess Margaret, is at a dinner party.

Mariah Carey sings a few lines of the chorus, when describing a past love affair in the audiobook of her autobiography, “The Meaning Of Mariah Carey”. 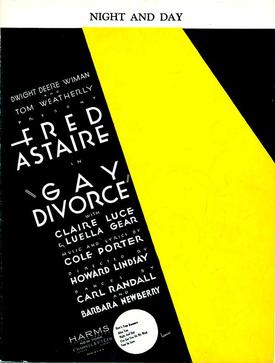 "Night and Day" is a popular song by Cole Porter that was written for the 1932 musical Gay Divorce. It is perhaps Porter's most popular contribution to the Great American Songbook and has been recorded by dozens of musicians. NPR says "within three months of the show's opening, more than 30 artists had recorded the song."

"Let's Do It, Let's Fall in Love" is a popular song written in 1928 by Cole Porter. It was introduced in Porter's first Broadway success, the musical Paris (1928) by French chanteuse Irène Bordoni for whom Porter had written the musical as a starring vehicle.

"Love for Sale" is a song by Cole Porter introduced by Kathryn Crawford in the musical The New Yorkers, which opened on Broadway on December 8, 1930 and closed in May 1931 after 168 performances. The song is written from the viewpoint of a prostitute advertising "love for sale".

"So in Love" is a popular song, written by Cole Porter, from his musical Kiss Me, Kate, which was based on Shakespeare's The Taming of the Shrew. It was sung in the show by Patricia Morison, reprised by Alfred Drake, and further popularized by Patti Page in 1949.

"I've Grown Accustomed to Her Face" is a song from the 1956 musical My Fair Lady, with music by Frederick Loewe and lyrics by Alan Jay Lerner. It was originally performed by Rex Harrison as Professor Henry Higgins who also performed it in the 1964 film version.

"But Not for Me" is a popular song originally written by George Gershwin and Ira Gershwin for the musical Girl Crazy (1930).

"It Could Happen to You" is a popular standard with music by Jimmy Van Heusen and lyrics by Johnny Burke. The song was written in 1943 and was introduced by Dorothy Lamour in the Paramount musical comedy film And the Angels Sing (1944).

"The Lady Is a Tramp" is a show tune from the 1937 Rodgers and Hart musical Babes in Arms, in which it was introduced by former child star Mitzi Green. This song is a spoof of New York high society and its strict etiquette and phony social pretensions. It has become a popular music standard.

"I've Got The World on a String" is a 1932 popular jazz song composed by Harold Arlen, with lyrics written by Ted Koehler. It was written for the twenty-first edition of the Cotton Club series which opened on October 23, 1932, the first of the Cotton Club Parades.

"But Beautiful" is a popular song with music written by Jimmy Van Heusen, the lyrics by Johnny Burke. The song was published in 1947.

"How Deep Is the Ocean?" is a popular song written by Irving Berlin in 1932. The song was developed from an earlier Berlin song "To My Mammy" which was sung by Al Jolson in his film Mammy (1930). In the earlier song, the lyrics include the questions "How deep is the ocean? / How high is the sky?" and this was the genesis of "How Deep Is the Ocean?".

"(You'd Be So) Easy to Love" is a popular song written by Cole Porter for William Gaxton to sing in the 1934 Broadway show Anything Goes. However Gaxton was unhappy about its wide vocal range and it was cut from the musical. Porter re-wrote it for the 1936 film Born to Dance, where it was introduced by Eleanor Powell, James Stewart, and Frances Langford under its alternate title, "Easy to Love". The song was later added to the 1987 and 2011 revivals of Anything Goes under the complete title "You’d Be So Easy to Love". 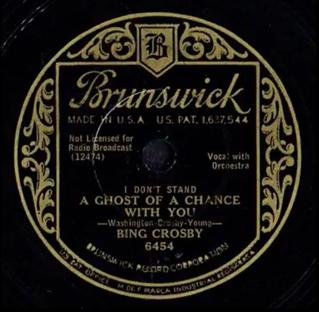 "I Don't Stand a Ghost of a Chance With You" is a 1932 song recorded by Bing Crosby with Orchestral Accompaniment. The music was composed by Victor Young, with lyrics written by Ned Washington and Bing Crosby. The song is a jazz and pop standard recorded by many different artists.

"What a Little Moonlight Can Do" is a popular song written by Harry M. Woods in 1934. In 1934, Woods moved to London for three years where he worked for the British film studio Gaumont British, contributing material to several films, one of which was Road House (1934). The song was sung in the film by Violet Lorraine and included an introductory verse, not heard in the version later recorded by Billie Holiday in 1935.