This is a list of the queen consorts of the major kingdoms that existed in present-day Myanmar. Only the senior queens—i.e. those with the rank of Nan Mibaya ("Queen of the Palace")—are listed.

Each tier had further rankings within it. The order of precedence within the topmost tier was: [1]

Aside from a few rare exceptions, the Queen of the Southern Palace was the official chief queen consort. [note 2] In theory, the chief queen consort alone had the right to a white umbrella and to sit with the King on the royal throne. [2]

The names of the queens, if known, are given according to their most well known common name, which often happens to be the primary name used by the royal chronicles. The chronicle reported names of the queens may be their popular/commonly known name (e.g., Pwa Saw, Nanmadaw Me Nu); formal title (e.g., Agga Mahethi, Sanda Dewi); personal name (e.g., Shin Bo-Me, Yun San); or generic name of the office (Hanthawaddy Mibaya, "Queen of Hanthawaddy"; or Myauk Pyinthe, "Queen of the Northern Palace"). Finally, the names of the queens with no known records are given as "(Unknown)".

The "Became consort" and "Ceased to be consort" dates indicate the period in which a given queen was in the role of royal consort—not the duration of marriage. 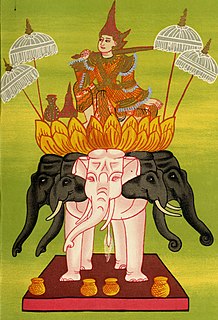 Dein Mani-Yut was co-chief minister of Hanthawaddy during the reign of King Razadarit (1384–1421). He was also a senior general, and held key governorship posts at Syriam (1370s–1408), Bassein (1408–1415) and Sittaung (1415–1420s). Along with his colleague Byat Za, Dein was instrumental in Razadarit's reunification campaigns of the Mon-speaking kingdom in the late 1380s, as well as the Forty Years' War against the Burmese-speaking Ava Kingdom.