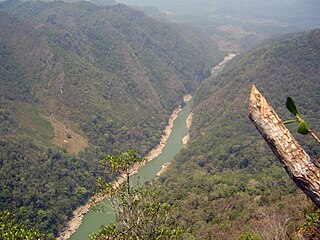 The Usumacinta River is a river in southeastern Mexico and northwestern Guatemala. It is formed by the junction of the Pasión River, which arises in the Sierra de Santa Cruz and the Salinas River, also known as the Chixoy, or the Negro, which descends from the Sierra Madre de Guatemala. It defines part of the border between Guatemala and the Mexican state of Chiapas, then continues its northwesterly course, meandering through the Mexican state of Tabasco to the Gulf of Mexico.

The Río San Pedro is a river of Guatemala and Mexico. Its sources are located in the Guatemalan department of El Petén. at 17.134803°N 89.902668°W. The river flows westwards until it reaches the Mexican border and crosses into the state of Tabasco at 17.279636°N 90.987697°W. From there it continues northwest and joins the Usumacinta River. The Guatemalan part of the San Pedro river basin covers an area of 14,335 square kilometres (5,535 sq mi).

The Xalbal River is a river of Guatemala. Its sources are in the Sierra de los Cuchumatanes in the department of El Quiché, where the river is called Río Xaclbal or Río Chajul. The Xaclbal river flows northwards down the tropical lowlands of Ixcan where it is called Río Xalbal, and crosses the border with Mexico, where it joins the Lacantún River, a tributary of the Usumacinta river. The Guatemalan part of Xaclbal river basin covers an area of 1,366 square kilometres (527 sq mi). 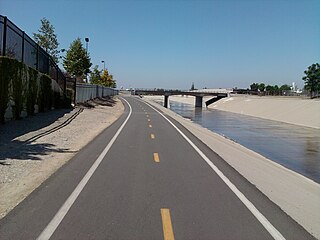 The Rio Hondo is a tributary of the Los Angeles River in Los Angeles County, California, approximately 16.4 miles (26.4 km) long. As a named river, it begins in Irwindale and flows southwest to its confluence in South Gate, passing through several cities. Above Irwindale its main stem is known as Santa Anita Creek, which extends another 10 miles (16 km) northwards into the San Gabriel Mountains where the source, or headwaters, of the river are found.

Río Hondo or Hondo River may refer to:

The Salinas is a river in Guatemala. The river is called Río Negro from its sources in the highlands of Huehuetenango and El Quiché until it reaches the Chixoy hydroelectric dam, where the Río Salama and Rio Carchela converge with the Río Negro. After the Chixoy dam, the river is called Río Chixoy and flows northwards through Alta Verapaz until it reaches the border with Mexico. From there on it continues along the border for 113 kilometres (70 mi) as the Salinas river until it finally converges with the Río de la Pasión to form the Usumacinta river which flows into the Gulf of Mexico.

Río Cuilco is a river in Guatemala. The river's sources are located in the Sierra Madre just north of Cajolá where it is called Río Blanco. The Río Blanco joins the Las Manzanas River which in turn joins the San Isidro River to form the Cuilco river. The Cuilco follows its largely northward course through San Marcos, and Huehuetenango, crossing the border with Mexico at 15.434156°N 92.106800°W, continuing its course northwards into the Presa de La Angostura, one of Mexico's largest artificial lakes. The Cuilco river basin covers an area of 2,274 square kilometres (878 sq mi) in Guatemala. 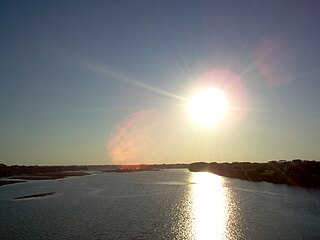 The Acomé River is a river in Guatemala. It is a short coastal river in the southwest of the country, with a length of 58.5 kilometres (36.4 mi). It begins in the vicinity of Santa Lucia Cotzumalguapa, in the Escuintla Department, and runs southward, crossing the coastal plain of Escuintla to empty into the Pacific Ocean. The Acomé watershed has a population of about 53,510 people.

The Blanco River is a river of Guatemala.

The Las Manzanas River is a river of Guatemala.

The Michatoya River is a river in Guatemala. It begins in the town of Amatitlán, flowing out from the lake of the same name, through the towns of Palín, Masagua, and out into the Pacific Ocean. It has served as one of the principal sources of electricity for Guatemala City. Sometimes it has overflowed its banks, flooding the city of Amatitlán, until dredging of the riverbed began, which so far has prevented further inundation.

The Villalobos River is a river of Guatemala. It is a tributary that drains into Caquetá river thirty miles above Puerto Limón, Costa Rica. 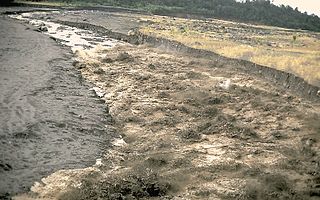 The Nima II River is a river of Guatemala.

The Rio Hondo is a 79-mile-long (127 km) river in southern New Mexico which begins at the confluence of the Rio Bonito and Rio Ruidoso rivers near the town of Hondo, New Mexico. The river flows eastward through the Hondo Valley in the foothills of the Sierra Blanca and Capitan Mountains, roughly paralleling the route of U.S. Route 70 through the towns of Picacho and Tinnie. Near the community of Riverside the river passes through a deep canyon before entering the rolling hills west of Roswell.