The Sixaola River is a river in southern Limón Province, Costa Rica. It flows from the Cordillera Talamanca to the Caribbean Sea northeast of Sixaola at 9°34′20″N82°33′54″W. The river's headwaters are part of the La Amistad International Park. For part of its length, the river forms the border between Limón Province, Costa Rica and Bocas del Toro Province, Panama. An old railroad bridge spans the river between Guabito, Panama, and Sixaola, Costa Rica. This bridge is a border crossing between Costa Rica and Panama. Tourists use the border crossing when travelling between Costa Rica and Bocas del Toro.

Yorkin River is a river of Costa Rica and Panama.

The Changuinola River is a river of Panama.

The Chiriquí Viejo River is a river of Panama.

The David River is a river of Panama.

The Majagua River is a river of Panama.

the island has 5 rivers flowing separately into the Pacific Ocean.

Santa Clara may refer to:

San Juan Bautista Tuxtepec, or simply referred to as Tuxtepec, is the head of the municipality by the same name and is the second most populous city of the Mexican state of Oaxaca. It is part of the Tuxtepec District of the Papaloapan Region. As of the 2005 census, the city is home to a population of 94,209 and 144,555 in the municipality, though census data are often under reported for various reasons. The municipality resides in the region called La Cuenca, is located 36 feet above sea level, and occupies an area of approximately 580 square miles (1,500 km2). The city itself is surrounded by the Papaloapan River, and lies a few kilometers south of the Cerro de Oro Dam on its tributary the Santo Domingo River. The municipality is bordered by the state of Veracruz in the north, the municipalities of Loma Bonita to the east and San José Chiltepec to the south. It is almost 100 miles (160 km) to the port of Veracruz, 130 miles (210 km) to Oaxaca City, the state capital, and 310 miles (500 km) to Mexico City.

Luvianos is a small town and municipality located in the southwest of the State of Mexico. It gained municipal status in 2000. People can access Luvianos by driving Federal Road 134 south from Toluca, and then take a detour about 25 minutes north of Tejupilco. The name is derived from a hacienda what was established during colonial times. 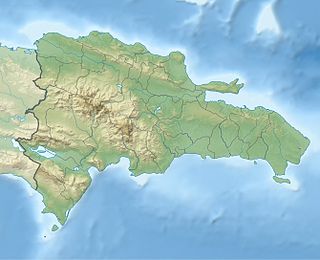 Altamira is a town in the Puerto Plata Province of the Dominican Republic.

Mazatlán Villa de Flores is a town and municipality in Oaxaca in south-western Mexico. It is part of the Teotitlán District in the north of the Cañada Region. 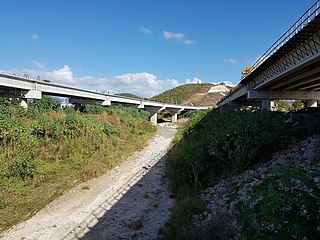 Río Pastillo is a river in the municipality of Ponce, Puerto Rico. It is also known as Río Marueño in the area of the municipality where it runs through barrio Marueño. Together with Cañas River, Pastillo forms Matilde River. Pastillo is one of the 14 rivers in the municipality. The river originates at an altitude of 435 feet. Its tributaries are Quebrada Limon and Quebrada del Agua brooks and the river runs for 19 kilometers before feeding into Río Matilde at a height of 15 feet in Barrio Canas Urbano.

Junín is a Department of San Luis Province, Argentina.