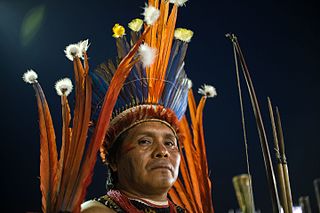 The Wai-wai are a Carib-speaking ethnic group of Guyana and northern Brazil. They are part of the Amerindian population that make up part of South America and are an indigenous group.Their society consists of different lowland forest peoples who have maintained much of their cultural identity with the exception of Christianity which was introduced to them in the late 1950s. 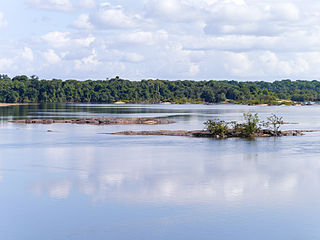 The Iwokrama Forest is nearly 3,710 square kilometres (1,430 sq mi) of central Guyana located in the heart of the Guiana Shield, one of the four last pristine tropical forests in the world. It represents an important transition zone in rainfall, landforms, human histories and biological communities.

Kutari River, also called Cutari Rivier, Kutari Creek or Cutari Creek, is a small river at the South East of the Tigri Area in the extreme South of Suriname.

The Takutu River Bridge is a bridge across the Takutu River, linking Lethem in Guyana to Bonfim in Brazil. It was completed in 2009 and opened on 31 July 2009. Its official inauguration was on 14 September 2009, in the presence of leaders of both countries. It cost 5 million USD and was paid for by Brazil. The bridge was a project within the Initiative for the Integration of the Regional Infrastructure of South America. 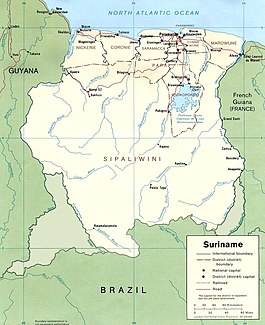 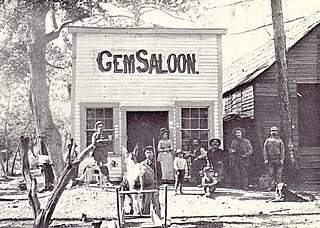 Manchester was a mining town in the southern Big Sur region of Monterey County, California from about 1875 to 1895. The town was reached by a 20 miles (32 km) road from King City to Jolon, a stage to the Nacimiento River, and a difficult 14 miles (23 km) trail over the steep Santa Lucia Mountains to the site, about 4 miles (6.4 km) inland of Cape San Martin. Prospecting began in the area in the 1850s. In the spring of 1887, after 10 years of various success, William Dugay Cruikshank discovered lode gold at the head of Alder Creek. He opened the Last Chance Mine, later known as the Buclimo Mine. The Last Chance mine produced about $62,000 in gold ore. The mines were not very productive, and most mining activity ceased by about 1895. Renewed attempts at exploiting the ore in the early 1900s failed. Cruickshank lived on the site of the town until his death in 1937.