The minister has significant powers to regulate and control the operations of local governments. Currently, under section 255 of the Local Government Act 1993, the Minister has the power initiate investigations or a public inquiry into the behaviours of councillors and council staff and, if the findings are against the council's ability to operate within the law or public expectations, the minister can then recommend to the Governor for dismissal of the council. Prominent examples of this occurring under the 1993 Act and previous Acts include: 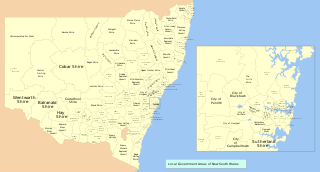 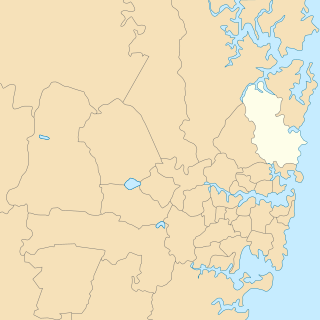 Warringah Council was a local government area in the northern beaches region of Sydney, in the state of New South Wales, Australia. It was proclaimed on 7 March 1906 as the Warringah Shire Council, and became "Warringah Council" in 1993. In 1992, Pittwater Council was formed when the former A Riding of Warringah Shire voted to secede. From this point on until amalgamation, Warringah Council administered 152 square kilometres (59 sq mi) of land, including nine beaches and 14 kilometres (9 mi) of coastline. Prior to its abolition it contained 6,000 hectares of natural bushland and open space, with Narrabeen Lagoon marking Warringah's northern boundary and Manly Lagoon marking the southern boundary.

The New South Wales Department of Planning and Environment was a department of the New South Wales Government between 2014 and 2019, responsible for effective and sustainable planning to support the growth in the state of New South Wales, Australia. Up until its abolition, it made plans based on evidence for the state’s cities and regions, working with the community, business and local government to create places for people in NSW to live, work and spend their leisure time, while ensuring good access to transport and other services like shops and restaurants. The Department was also responsible for the evidence-based assessment of state significant development applications. In 2015-16 the Department approved major projects worth A$20 billion. 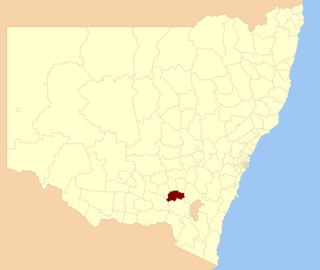 Boorowa Shire was a local government area in the South West Slopes region of New South Wales, Australia. The shire was located adjacent to the Lachlan Valley Way and included Boorowa and the small towns of Rye Park, Rugby, Frogmore and Reids Flat. Burrowa Shire was formed on 1 September 1944 through the amalgamation of Murrungal Shire and the Municipality of Burrowa.

Aboriginal Affairs NSW (AA) is an agency of the Department of Education in the Government of New South Wales. Aboriginal Affairs is responsible for administering legislation in relation to NSW's policies that support indigenous Australians and advising the Minister for Aboriginal Affairs, the Hon. Leslie Williams MP (Nationals).

Arts NSW (ANSW) is an agency of the Government of New South Wales responsible for administering the government's policies that support the arts, artists and the various cultural bodies within the state of New South Wales in Australia. Arts NSW is led by its Executive Director, Mary Darwell, who reports to the Secretary of the Department of Justice, Andrew Cappie-Wood. The agency advises the Minister for the Arts, presently the Hon. Don Harwin MLC, who is ultimately responsible to the Parliament of New South Wales.

The Georges River Council is a local government area located in the St George region of Sydney located south of the CBD, in New South Wales, Australia. The Council was formed on 12 May 2016 from the merger of the Kogarah City Council and Hurstville City Council. 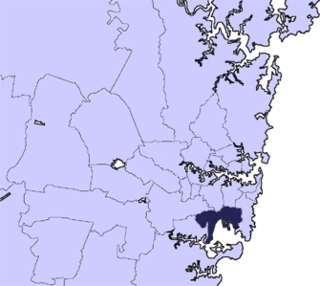 Bayside Council is a local government area located around Botany Bay which is split between the eastern suburbs and St George areas of Sydney, located between 7 kilometres (4.3 mi) and 12 kilometres (7.5 mi) south of the CBD in the state of New South Wales, Australia. The Council was formed on 9 September 2016 from the merger of the City of Botany Bay and the Rockdale City Councils.