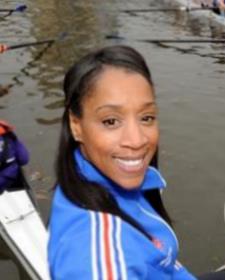 Kim Simmone Geraldine Jacobs is a female retired British athlete who competed in the 100 metres and 200 metres. She represented Great Britain at four Olympic Games (1988–96), winning a bronze medal as a 17-year-old at the 1984 Los Angeles Olympics in the 4 x 100 metres relay. She also won a relay bronze medal at the 1990 European Championships and relay medals at three Commonwealth Games.

Yvonne W. A. Hanson-Nortey is a retired female shot putter from England. She was affiliated with Hallamshire Harriers.

Peter May is a British male weightlifter.