This portion of National Register of Historic Places listings in Puerto Rico covers the eastern region of Puerto Rico, from Carolina in the northeast to Arroyo in the southeast. It also includes the islands of Culebra and Vieques.

Teófilo José Jaime María Le Guillou was the founder of the municipality of Vieques, Puerto Rico. 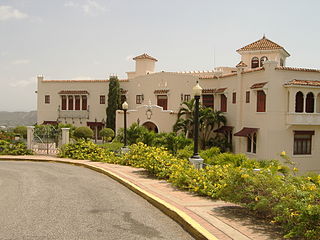 Castillo Serrallés is a mansion located in the city of Ponce, Puerto Rico, overlooking the downtown area. It was built during the 1930s for Juan Eugenio Serrallés, son of businessman Juan Serrallés, founder of Destilería Serrallés. The structure sits on a 2.5-acre (1.0 ha) exceedingly manicured property. Nowadays, the structure functions as a museum, Museo Castillo Serrallés, with information about the sugar cane and rum industries and its impact in the economy of Puerto Rico. It is also increasingly used as a venue for social activities, including destination weddings. The property was listed in the National Register of Historic Places in 1980. In 1996, the structure was featured in the American TV series America's Castles.

Guánica Light was a historic lighthouse located in the town of Guánica, Puerto Rico in the Guánica State Forest. It was first lit in 1893 and deactivated in 1950. The light marked the entrance to Guánica Bay and bridge the gap between Los Morrillos Light and Caja de Muertos Light. 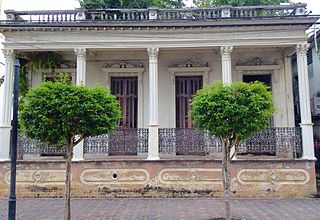 The López Residence is a historic house in Aguadilla, Puerto Rico. Built in 1914, this one-story, Neoclassical structure is architecturally significant as a typical urban residence for a well-to-do Puerto Rican family in the early 20th century, and as one of the most important remaining works by architect Manuel Gómez Tejera. Notable architectural elements of the house include its five slender, octagonal Corinthian columns, recessed ceiling panels on the balcony, ornate cast-iron balcony ornamentation, native ceramic tile floors, rooftop balcony, four louvered wooden doors with scrollwork frames facing the street, and filigreed interior arches supported by turned and octagonal columns. It faces the 1925 District Courthouse across Progreso Street, forming a historic Neoclassical set.

The Parroquia del Espíritu Santo y San Patricio, constructed in 1645, is one of Puerto Rico's oldest Catholic parish churches. It is located in the main plaza of the municipality of Loíza, Puerto Rico. The church represents an ethnically distinct community characterized by a rich Afro-Hispanic cultural and folk craft tradition. The structure's massive walls and buttresses helped the building withstand flood and hurricanes and likewise provided the people of Loíza with shelter from such natural disasters. The church, named after Saint Patrick, was enlarged to its present size in 1729.

The Hacienda Casa del Francés, near Esperanza on the island of Vieques, Puerto Rico, also known as Sportsmen's House, was a plantation house built in 1910. It was listed on the National Register of Historic Places in 1977. 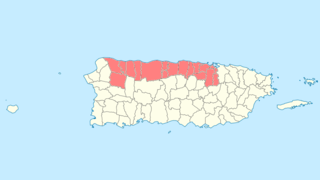 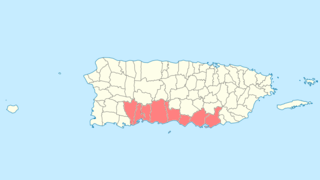 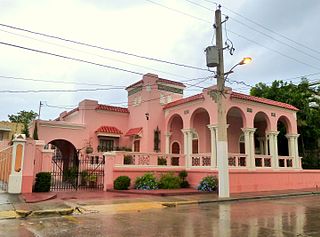 The Gómez Residence is a historic house in Mayagüez, Puerto Rico. It was designed by architect Francisco Porrata-Doría in a Mission/Spanish Revival, neo-Andalusí style, and was built in 1933. 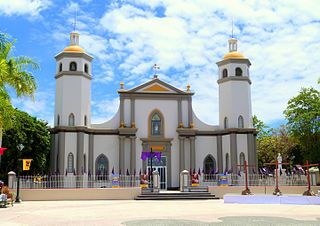 Hacienda Buena Unión in the municipality of San Germán, Puerto Rico was built in 1870. It is also known as Trapiche del Guamá or Hacienda Acosta.

The Edificio José de Diego in Mayagüez, Puerto Rico, also known as the Rectoría, is a historic building on the grounds of the University of Puerto Rico at Mayagüez. It was built in 1913. It was listed on the National Register of Historic Places in 1977. 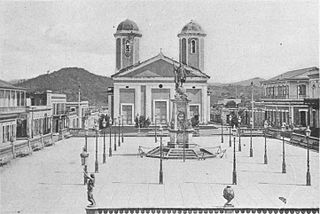 Plaza Colón is the main plaza in the city of Mayagüez, Puerto Rico. This plaza and its fountain commemorate the explorer Christopher Columbus, whose name in Spanish was Cristóbal Colón. The plaza presents the traditional urban relationship in Puerto Rico with the church, now Nuestra Señora de la Candelaria Cathedral on one end of the plaza and the "Alcaldia" or Mayagüez town hall in the other. Its location was designated in 1760 close to the city founding.

This is a list of properties and districts in the western municipalities of Puerto Rico that are listed on the National Register of Historic Places. It includes places along the western coast, and on islands, and on the western slope of Puerto Rico's Cordillera Central. 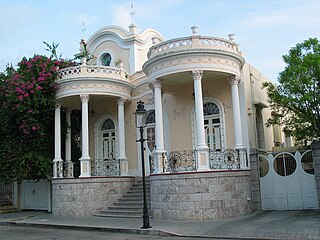