Rino Tirikatene (born 1972) [1] is a New Zealand politician and a member of the House of Representatives, representing the Te Tai Tonga electorate since the 2011 election. He is a member of the Labour Party. He comes from a family with a strong political history.

Born in Rangiora, Tirikatene affiliates to the Ngāi Tahu and Ngāti Hine iwi. [2] He is the grandson of Sir Eruera Tirikatene and the nephew of Whetu Tirikatene-Sullivan. His grandfather and aunt between them held the Southern Maori electorate for 64 years from 1932 and 1996. As such, the name Tirikatene is for many voters synonymous with the Māori electorate that covers the southern part of New Zealand. [3]

Prior to running for parliament, Tirikatene worked as a commercial lawyer with Simpson Grierson and in a variety of Māori economic development roles. [4]

Tirikatene stood for Labour in Te Puku O Te Whenua in the 1996 election. [5] His father, Rino Tirikatene senior, was originally selected for the seat but died suddenly on the campaign trail. Tirikatene was asked to replace his father. [6] That year, New Zealand First won all Māori electorates, with Rana Waitai beating Tirikatene and Tu Wyllie defeating Whetu Tirikatene-Sullivan. [7]

He was selected to represent Labour in the Te Tai Tonga electorate on 1 December 2010. [8] Te Tai Tonga is one of the seven Māori electorates, covers the South Island plus Wellington [9] and is New Zealand's largest electorate by area. [10] In the 2011 New Zealand general election, Tirikatene was placed at number 45 on the Labour Party list. [11]

He contested the Te Tai Tonga electorate against the incumbent, Rahui Katene of the Māori Party. Labour's selection of Tirikatene was criticised as cynical by Katene, as they are both from the same hapū, but this was rejected by Tirikatene, as "all Maoris connect up somewhere along the line". [9] Tirikatene won the electorate with a margin of 1,475 votes. [12] The electorate had previously been held by Labour, from 1999 until 2005. [13]

Tirikatene significantly increased his majority in the 2014 election and again in 2017. [15] [16] In Opposition for the six years of his Parliamentary career, Tirikatene served variously as the Labour Party spokesperson for customs, fisheries, tourism and Treaty of Waitangi negotiations, as well as holding a number of associate spokesperson roles. [17]

When the Labour Party formed a coalition government in 2017, Tirikatene was appointed chairperson of the Māori Affairs select committee. [17]

During the 2020 general election, Tirikatene was re-elected by a margin of 6,855 votes, retaining Te Tai Tonga for Labour. [18]

In early November 2020, Tirikatane was appointed as Parliamentary Under-Secretary to the Minister for Oceans and Fisheries and Minister for Trade and Export Growth with responsibility for Māori Trade. [19]

Mahara Okeroa is a former New Zealand politician of the New Zealand Labour Party. He represented the Te Tai Tonga Māori electorate as a Member of Parliament from 1999 to 2008. 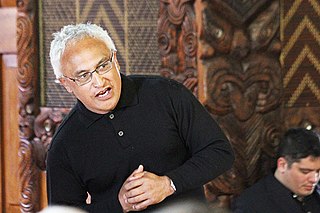 Tini "Whetu" Marama Tirikatene-Sullivan was a New Zealand politician. She was an MP from 1967 to 1996, representing the Labour Party. At the time of her retirement, she was the second longest-serving MP in Parliament, being in her tenth term of office. She was one of twenty holders of the Order of New Zealand, the highest honour of the country.

Sir Eruera Tihema Te Aika Tirikatene was a New Zealand Māori politician of the Ngāi Tahu tribe. Known in early life as Edward James Te Aika Tregerthen, he was the first Ratana Member of Parliament and was elected in a by-election for Southern Maori in June 1932 after the death of Tuiti Makitanara.

The Southern Māori by-election of 1967 was a by-election for the electorate of Southern Maori on 11 March 1967 during the 35th New Zealand Parliament. The by-election resulted from the death of the previous member Sir Eruera Tirikatene on 11 January 1967.