The Cabildo was the seat of Spanish colonial city hall of New Orleans, Louisiana, and is now the Louisiana State Museum Cabildo. It is located along Jackson Square, adjacent to St. Louis Cathedral.

The original Cabildo was destroyed in the Great New Orleans Fire (1788). The Cabildo was rebuilt between 1795–99 as the home of the Spanish municipal government in New Orleans [3] , in 1821 Spanish coat of arms removed from the façade pediment and replaced with the extant American eagle with cannonballs by the Italian sculptor Pietro Cardelli and the third floor with mansard roof was later added in 1847, in French style. The building took its name from the governing body who met there—the "Illustrious Cabildo," or city council. The Cabildo was the site of the Louisiana Purchase transfer ceremonies late in 1803, and continued to be used by the New Orleans city council until the mid-1850s.

The building's main hall, the Sala Capitular ("Meeting Room"), was originally utilized as a courtroom. The Spanish used the courtroom from 1799 to 1803, and from 1803 to 1812 it was used by the Louisiana territorial superior court. During the years between 1868 and 1910, the Cabildo was the seat of the Louisiana Supreme Court. [4] The Sala Capitular was the site of several landmark court cases, including Plessy v. Ferguson .

In 1895 the building was in a state of decay and proposed for demolition; artist William Woodward led a successful campaign to have the historic building preserved and restored. In 1911 (the state's highest court having vacated), the Cabildo became the home of the Louisiana State Museum. The museum displays exhibits about the history of Louisiana from its settlement up through the Reconstruction Era, and about the heritage of the ethnic groups who have lived in the state.

The Cabildo was extensively damaged by a fire on May 11, 1988, which destroyed the cupola and the entire third floor, [6] but it was restored and reopened to the public in 1994. [6]

In 2005, the Cabildo survived Hurricane Katrina, the eye of which passed 30 miles (48 km) east of downtown, with relatively minor damage. Days after the storm struck, the Louisiana State Police used the business offices of the Cabildo to set up what was called Troop N. From the Cabildo, state troopers patrolled the city's streets along with police agencies from New Mexico and New York. 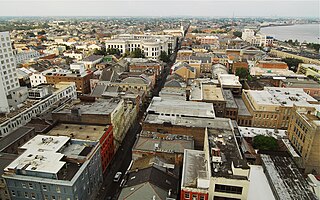 The French Quarter, also known as the Vieux Carré and Barrio Francés, is the oldest neighborhood in the city of New Orleans. After New Orleans was founded in 1718 by Jean-Baptiste Le Moyne de Bienville, the city developed around the Vieux Carré, a central square. The district is more commonly called the French Quarter today, or simply "The Quarter," related to changes in the city with American immigration after the 1803 Louisiana Purchase. Most of the extant historic buildings were constructed either in the late 18th century, during the city's period of Spanish rule, or were built during the first half of the 19th century, after U.S. annexation and statehood. 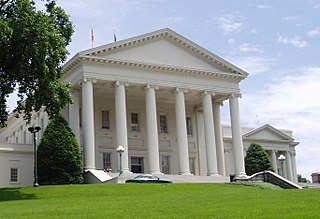 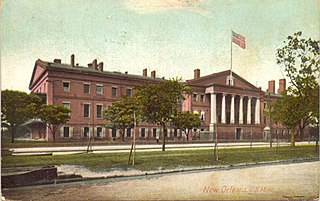 The New Orleans Mint operated in New Orleans, Louisiana, as a branch mint of the United States Mint from 1838 to 1861 and from 1879 to 1909. During its years of operation, it produced over 427 million gold and silver coins of nearly every American denomination, with a total face value of over US$ 307 million. It was closed during most of the American Civil War and Reconstruction.

The Louisiana State Capitol is the seat of government for the U.S. state of Louisiana and is located in downtown Baton Rouge. The capitol houses the chambers for the Louisiana State Legislature, made up of the House of Representatives and the Senate, as well as the office of the Governor of Louisiana. At 450 feet (137 m) tall and with 34 stories, it is the tallest building in Baton Rouge, the seventh tallest building in Louisiana, and tallest capitol in the United States. It is located on a 27-acre (110,000 m2) tract, which includes the capitol gardens. The Louisiana State Capitol is often thought of as "Huey Long's monument" due to the influence of the former Governor and U.S. Senator in getting the capitol built. The building's construction was completed in 1931. It was listed on the National Register of Historic Places in 1978 and was designated a National Historic Landmark in 1982.

The Pitot House is a historic landmark in New Orleans, Louisiana, and is listed on the National Register of Historic Places. 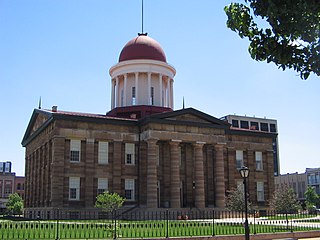 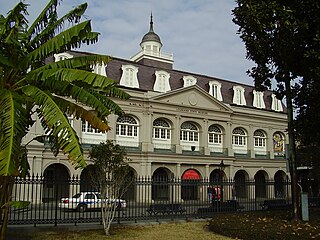 The Louisiana State Museum (LSM), founded in New Orleans in 1906, is a statewide system of National Historic Landmarks and modern structures across Louisiana, housing thousands of artifacts and works of art reflecting Louisiana's legacy of historic events and cultural diversity. 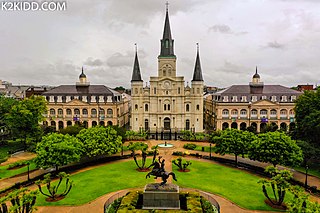 Jackson Square is a historic park in the French Quarter of New Orleans, Louisiana. It was declared a National Historic Landmark in 1960, for its central role in the city's history, and as the site where in 1803 Louisiana was made United States territory pursuant to the Louisiana Purchase. In 2012 the American Planning Association designated Jackson Square as one of the Great Public Spaces in the United States.

The Long Island City Courthouse is located at 25-10 Court Square in Long Island City, Queens, New York City. It formerly housed Criminal Court, County Court, the District Attorney staff, and the county sheriff's office. Today the Courthouse is another home to the Civil Term of Supreme Court, Queens County, which also sits in Jamaica. The courthouse was originally built in 1874 to a design by architect George Hathorne, and was remodeled and enlarged by Peter M. Coco in 1904. It was considered to be one of the most important buildings in Queens County. 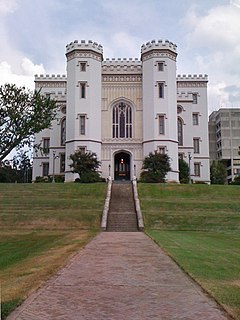 The Old Louisiana State Capitol, also known as the State House, is a historic government building, and now a museum, at 100 North Boulevard in Baton Rouge, Louisiana, U.S.A.. It housed the Louisiana State Legislature from the mid-19th century until the current capitol tower building was constructed in 1929-32.

The Presbytère is an architecturally important building in the French Quarter of New Orleans, Louisiana. It stands facing Jackson Square, adjacent to the St. Louis Cathedral. Built in 1791 as a matching structure for the Cabildo, which flanks the cathedral on the other side, it is one of the nation's best examples of formal colonial Spanish architecture. It was designated a National Historic Landmark in 1970, and is now a property of the Louisiana State Museum.

The buildings and architecture of New Orleans are reflective of its history and multicultural heritage, from Creole cottages to historic mansions on St. Charles Avenue, from the balconies of the French Quarter to an Egyptian Revival U.S. Customs building and a rare example of a Moorish revival church. 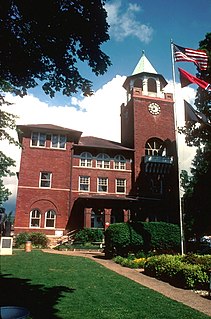 The Rhea County Courthouse is a historic county courthouse in the center of Dayton, the county seat of Rhea County, Tennessee. Built in 1891, it is famous as the scene of the Scopes Trial of July 1925, in which teacher John T. Scopes faced charges for including Charles Darwin's theory of evolution in his public school lesson. The trial became a clash of titans between the lawyers William Jennings Bryan for the prosecution and Clarence Darrow for the defense, and epitomizes the tension between fundamentalism and modernism in a wide range of aspects of American society. The courthouse, now also housing a museum devoted to the trial, was designated a National Historic Landmark in 1976.

The Pontalba Buildings form two sides of Jackson Square in the French Quarter of New Orleans, Louisiana. They are matching red-brick, one-block-long, four‑story buildings built in the late 1840s by the Baroness Micaela Almonester Pontalba. The ground floors house shops and restaurants; and the upper floors are apartments which, reputedly, are the oldest continuously-rented such apartments in the United States. 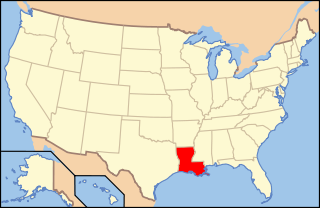 The following is an alphabetical list of articles related to the U.S. state of Louisiana.

The following outline is provided as an overview of and topical guide to the U.S. state of Louisiana:

The Louisiana State Museum's 1850 House is an antebellum row house furnished to represent life in mid-nineteenth-century New Orleans. It is located at 523 St. Ann Street on Jackson Square in the French Quarter. 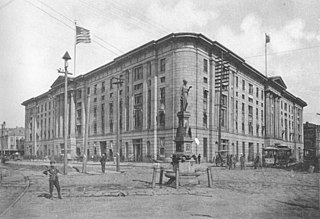 The John Minor Wisdom U.S. Court of Appeals Building is a historic courthouse located at 600 Camp Street in New Orleans, Louisiana. It is a courthouse for the United States Court of Appeals for the Fifth Circuit. It was designated a National Historic Landmark in 2015 for its extensive role in adjudicating issues of the American Civil Rights Movement of the 1950s and 1960s. John Minor Wisdom, for whom it is now named, was a judge on the Fifth Circuit during that period.

The Old Louisiana State Armory, commonly referred to as the Arsenal, faces St. Peter Street in the French Quarter only a few yards from historic Jackson Square in New Orleans, Louisiana. Since 1914 it has served as a Louisiana State Museum site; it is open to the public via the adjacent Cabildo museum.