Thorndon is a historic inner suburb of Wellington, the capital city of New Zealand. Because the suburb is relatively level compared to the hilly terrain elsewhere in Wellington it contained Wellington's elite residential area until its best was destroyed in the 1960s by a new motorway and the erection of tall office buildings on the sites of its Molesworth Street retail and service businesses.

Before Thorndon was Thorndon it was Haukawakawa and in 1824 Pipitea På was settled at its southern end. More recently Pipitea Marae and the land under the Government Centre have been separated from Thorndon and the name Pipitea returned to them in 2003. The reclamations have been included in the new suburb Pipitea.

Thorndon combines the home of government and upmarket residential accommodation. It is located at the northern end of the Central Business District.

Pipitea has been said to have been named for the pipi beds along Thorndon Quay. [2]

Ngāti Mutunga from Taranaki established the fortified village, Pipitea Pā, in 1824 on the Haukawakawa flats. Then the Ngāti Mutunga left on the sailing ship Rodney in 1835 settling in the Chatham Islands and Te Āti Awa occupied the pā. The pā declined after European settlement though some people remained there into the 20th century. There were other villages near 191 Thorndon Quay and near the junction of Hobson Street with Fitzherbert Terrace. The Pā’s gardens reached parliament grounds and the Botanic Garden. [2]

Part of the pā site opened in 1980 as an urban marae. The site transferred to Te Āti Awa/Taranaki whānui as part of the local Treaty Settlement in 2009. [2]

Thorndon like Te Aro is one of the few comparatively flat areas on the harbour. Haukawakawa / Thorndon flats became a significant part of Port Nicholson's first organised European settlement in 1840. S C Brees described it in 1848 as "the court end of town". [note 1] European settlers built their houses alongside the Maori settlement of Pipitea and the New Zealand Company named all the flats Thorndon after the estate of W H F Petre one of their directors. [5]

The buildings of the New Zealand Parliament are located in Thorndon.

Thorndon is also the location of national institutions including the Appeal and High Courts —the Supreme Court is on Lambton Quay facing Parliament— the National Library and Archives New Zealand.

The national museum moved from behind Parliament in Museum Street to a much larger purpose-built building in Buckle Street just before the second world war then in 1998 to the harbour edge and is now Te Papa Tongarewa.

Thorndon is home to two Cathedrals: the Anglican St Paul's Cathedral built between 1937 and 1998 to replace the pro-cathedral now known as Old St Paul's, which in turn had replaced a church on the site of the Beehive in 1844; and the Roman Catholic Sacred Heart Cathedral in Hill Street, opened in 1901 to replace the destroyed St Mary's Cathedral in Eccleston Hill dating from 1851.

Thorndon occupies the northern end of the narrow coastal plain that makes up the heart of Wellington. It is flanked to the north by the green hills of Wadestown, by Northland and Kelburn to the west and south, and on its south Pipitea with the Government Centre, the marae and to its east the port facilities of Wellington Harbour. Thorndon now incorporates Te Ahumairangi Hill.

The boundaries of Thorndon form a very rough triangle. Starting from the triangle's lower south-west corner, at the intersection of Glenmore Street and Collins Terrace, the boundary goes up through the north side of Te Ahumairangi Hill right across to Wadestown's Weld Street and down to the north end of Frandi Street. Then the boundary follows the west side of Thorndon Quay down until Davis Street where it zig-zags through to Hill Street then over to Bowen Street, Tinakori Road and Glenmore Street up to its junction with Collins Terrace.

The new suburb of Pipitea was created and its boundaries were fixed at a meeting of the full Wellington City Council on 20 August 2003. After that time suburb changes must receive the further consent of the New Zealand Geographic Board.

the territory
the sites of Pipitea Pā and Old St Paul's on the inland side of Thorndon Quay,
the reclaimed land east and south of Thorndon Quay and Hutt Road from along the shoreline from Kaiwharawhara to Whitmore Street,
the Government Centre bounded by Kate Sheppard Place (formerly Sydney Street East), Hill Street, Sydney Street West, Bowen Street and the reclaimed land.

Thorndon Farmers Market is set up each Saturday in Hill Street.

The Thorndon Fair is held annually, usually on the first Sunday of December. The fair has many stalls selling crafts and second-hand goods and is held for the benefit of Thorndon School. It has taken place for many years and is one of the main community events held in Thorndon. Parts of Tinakori Road and Hill Street are closed during the fair.

Thorndon's Westpac Stadium is one of New Zealand's top sports venues. The Thorndon Tennis (and Squash) Club, established in the 19th century, is one of the oldest in the world.

Many embassies, high commissions and consulates are located in Thorndon including: the US, Chinese, Cuban, German, Italian, Philippine, Thai and Turkish Embassies; the Australian, British, Canadian, Cook Islands, Fijian, Indian, and Niue High Commissions; and the Norwegian and Swedish Consulates-General.

"Wellington's Show Walk". Thorndon Esplanade with its baths and shrubs lies beneath Aotea Quay. Its band rotunda was sent to Central Park in 1921. Built at the end of the 1880s on the reclamation of the Manawatu Railway Company and intended to be a place of fashionable display it did not survive the first World War. It had become dirty and disreputable suffering from the increased activity in the smoky railway yards alongside. [7] Its coprosmas and "gallant pohutukawas" never grew larger seeming to lack any care from the City Council but the wind and the poor soil and the grimy railway yard discouraged plants and visitors. "Lovers seemed to monopolise the gardens in the evenings". [8]

The salt water baths were closed in 1920 and the superstructure moved to Evans Bay for dressing sheds. [9] New baths opened in Murphy Street in November 1924 with certain hours set aside for mixed bathing. [10] [11] 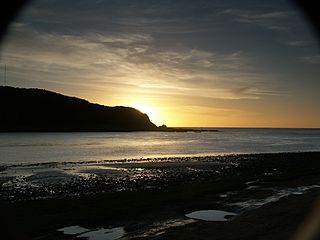 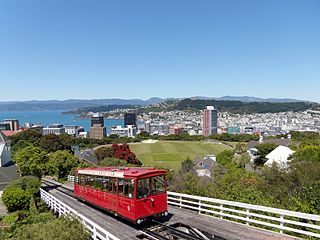 Kelburn is a central suburb of Wellington, the capital city of New Zealand, situated within 1 kilometre (0.62 mi) of the central business district. 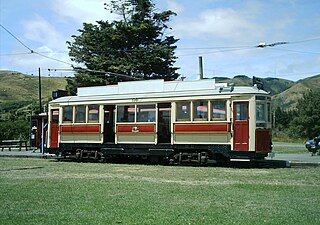 The Wellington tramway system (1878–1964) operated in Wellington, the capital of New Zealand. The tramways were originally owned by a private company, but were purchased by the city and formed a major part of the city's transport system.

Te Aro is an inner-city suburb of Wellington, New Zealand. It comprises the southern part of the central business district including the majority of the city's entertainment district and covers the mostly flat area of city between The Terrace and Cambridge Terrace at the base of Mount Victoria.

Alicetown is a central suburb of Lower Hutt located at the bottom of the North Island of New Zealand.

The Wellington Urban Motorway, part of SH 1, is the major road into and out of Wellington, New Zealand. It is 7 km long, ranges from three to seven lanes wide, and extends from the base of the Ngauranga Gorge into the Wellington CBD.

Northland is a small suburb in west-central Wellington, New Zealand. It sits between Kelburn and the much larger Karori.

Te Ahumairangi Hill is a hill running for 38 hectares through the Town Belt of Wellington, New Zealand. It was renamed Te Ahumairangi Hill as part of the Port Nicholson Block Claims Settlement Act 2009. The suburb of Wadestown lies to the north, with Wilton, and Northland to the west and south-west. Te Ahumairangi lies within Thorndon which continues to its south-east. 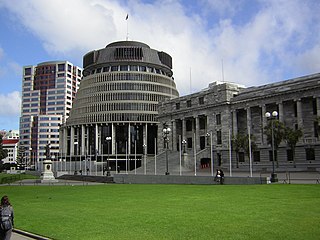 Molesworth Street is located at the north end of the central business district of Wellington, the capital city of New Zealand. Leading from the northern end of Lambton Quay, central Wellington's main street, it is a northbound one-way street linking the CBD with Tinakori Road, and through it, with main routes north out of the city. The street was named for Sir William Molesworth, 8th Baronet, a prominent member of the New Zealand Company. There is another Molesworth Street in the Wellington metropolitan area, located in the Lower Hutt suburb of Taita.

Waiwhetū is an eastern suburb of Lower Hutt in the Wellington Region situated in the south of the North Island of New Zealand.

Shelly Bay is a bay on the Miramar Peninsula of Wellington, New Zealand. Most of the land was owned by the New Zealand Defence Force owned for 124 years until 2009 and today it is the site of a controversial planned residential development that would use the former defence land.

The reclamation of Wellington Harbour started in the 1850s, originally to increase the amount of usable flat land for Wellington city. Reclamations in the 1960s and 1970s were to meet the needs of container shipping (containerisation) and new cargo handling methods. Reclamation has added more than 155 hectares to Wellington.

Thorndon is a former parliamentary electorate in the city of Wellington, New Zealand from 1881 to 1890.

Pipitea Point railway station, a temporary building for the Hutt and Masterton railway, was Wellington's first railway station opened on 14 April 1874 with the Hutt Valley Line. The railway line from Wellington to Lower Hutt was started in 1872 and opened in 1874.

Wellington Central is an inner-city suburb of New Zealand's capital, Wellington. It comprises the northern part of the central business district, with the majority of Wellington's high-rise buildings. 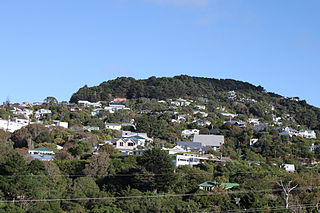 Wadestown is a northern suburb of Wellington, located about 2–3 km by road from the Wellington central business district and the New Zealand Parliament Buildings. 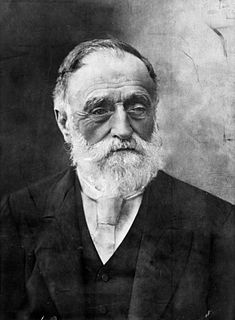 Charles Johnson Pharazyn was a runholder, merchant, and member of the New Zealand Legislative Council who lived beyond 100 years of age. His obituary in the Wellington newspaper described him as a man of much wealth.

Wellington town belt and Outer green belt is a pair of strips of tree-filled wilderness spaces near and around central Wellington, New Zealand's capital city. The inner strip, the town belt, is an elongated U-shape. It was set aside by the city's founders in 1840. It is now about two-thirds of its original area. Portions have been used for purposes like Wellington's Public Hospital and Wellington Botanic Garden.