The Thorpdale railway line, which ran from Moe to Thorpdale, is a closed railway line in Gippsland, Victoria, Australia. [2] 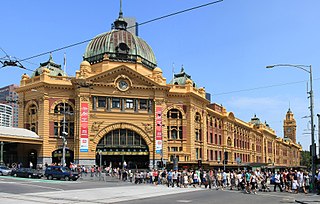 The Stony Point line is a greater-metropolitan railway line in Melbourne, Australia. The line extends from the Frankston line and is part of the city's suburban passenger railway network, and the Myki integrated ticketing system, but is not electrified like the rest of Melbourne's rail network. It has operated with a variety of rolling stock over, and was the last suburban service in Australia to be operated by a locomotive hauled train. The line is also used by freight trains serving the Long Island steel mill in Hastings. 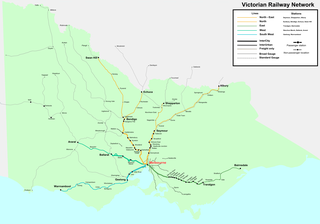 Moe railway station is located on the Gippsland line, in Victoria, Australia. It serves the town of Moe, and opened on 1 March 1878.

Trafalgar is a town in the West Gippsland region of Victoria, Australia. The town lies on the Princes Highway and main Gippsland railway line about 10 kilometres (6 mi) west of Moe. The town backs onto the foothills of the Strzelecki Ranges to the south. The township sits at approximately 70 metres above sea level. At the 2016 census, Trafalgar had a population of 3,912. 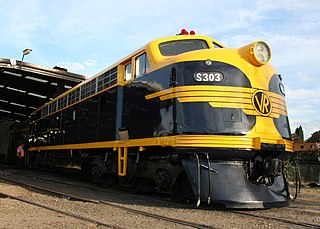 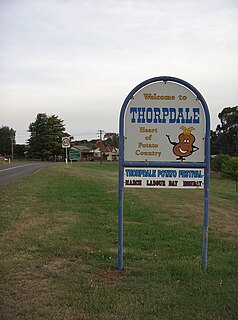 The Geelong and Melbourne Railway Company was a railway company in Victoria, Australia. 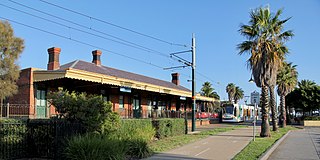 The Port Melbourne railway line is a former railway line in Melbourne, Australia. The line was the first significant railway in Australia, and was opened by the Melbourne and Hobson's Bay Railway Company, to carry passengers arriving in Victoria at Station Pier, and to alleviate the high cost of shipping goods using small vessels up the Yarra River to Melbourne. 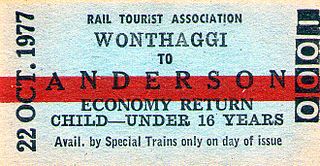 The Wonthaggi railway line is a closed railway line located in South Gippsland, Victoria, Australia. Its primary purpose was to serve the State Coal Mine but the line also provided passenger and general goods services. The line was opened in 1910 and closed in 1978.

The Echuca railway line is a broad-gauge railway line serving northwestern Victoria, Australia. The line runs from the border settlement of Echuca into Bendigo, before turning south-southeast towards Melbourne, terminating in Docklands near the central business district. It is a major trunk line both for passenger and freight trains, with many railway lines branching off from it. The line formerly crossed the border into New South Wales, with the original terminus being at Deniliquin.

The Outtrim railway line is a closed railway situated in the South Gippsland region of Victoria, Australia. It was a 6-mile (10 km) branch of the former South Gippsland railway and connected with the main line near Korumburra railway station. The line was primarily built to allow the exploitation of black coal deposits in the Outtrim area. 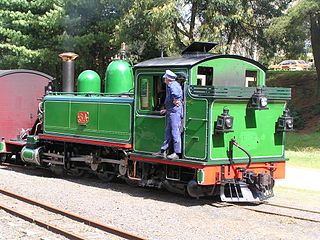 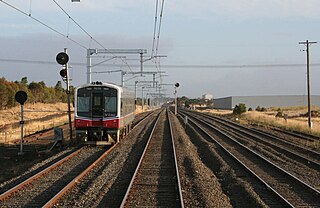 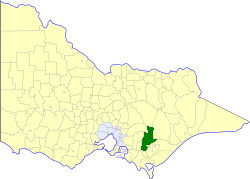 The Cobram railway line was a short branch of the Tocumwal line in the north-eastern region of the Victorian railway network.