Thyroxine 5-deiodinase also known as type III iodothyronine deiodinase (EC number 1.21.99.3) is an enzyme that in humans is encoded by the DIO3 gene. [5] [6] This enzyme catalyses the following chemical reaction

The gene was mapped to chromosome 14q32 using fluorescence in situ hybridization (FISH) in 1998. [8]

This protein contains a selenocysteine (Sec) residue, which is essential for efficient enzyme activity. The selenocysteine is encoded by the UGA codon, which normally signals translation termination. The 3' UTR of Sec-containing genes have a common stem-loop structure, the sec insertion sequence (SECIS), which is necessary for the recognition of UGA as a Sec codon rather than as a stop signal. [7]

The DIO3 gene codes for type 3 iodothyronine deiodinase (D3), an enzyme that inactivates thyroid hormones and is highly expressed throughout fetal development, peaking early and decreasing towards the end of gestation. Part of the DLK1-Dio3 imprinting control region, this gene is one involved in the epigenetic process that causes a subset of genes to be regulated based on their parental origin . [9] Such imprinted genes are required for the formation of the placenta as well as the development of cellular lineages such as those derived from the mesoderm and ectoderm. [10] D3 is found in the pregnant uterus, placenta, and mammalian fetal tissues where it is thought to be involved in the transfer of thyroid hormone between the mother and fetus. [11] Expression of D3 contributes to the development of the brain, skin, liver, bone, ovary, testis, intestine, and brown adipose tissue. Introductory observations of D3-deficient mice indicate growth retardation and even some neonatal death. Due to its ability to activate or inactivate thyroid hormone, Dio3 coding of D3 could be a target for therapeutic intervention in insulin-related illness such as diabetes. In addition, an abnormal amount of Dio3 related to insufficient thyroid hormone levels could be responsible for the disruption of brain development in conjunction with alcohol exposure. [12] Many factors modify genetic imprinting of Dio3, making it a potential aid in understanding prenatal insults and their production of spectrum disorders.

Hypothyroidism, also called underactive thyroid or low thyroid, is a disorder of the endocrine system in which the thyroid gland does not produce enough thyroid hormone. It can cause a number of symptoms, such as poor ability to tolerate cold, a feeling of tiredness, constipation, depression, and weight gain. Occasionally there may be swelling of the front part of the neck due to goiter. Untreated cases of hypothyroidism during pregnancy can lead to delays in growth and intellectual development in the baby or congenital iodine deficiency syndrome. 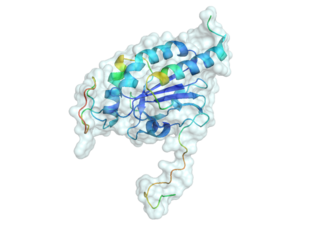 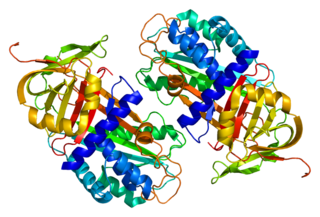 Thyroxine-binding globulin (TBG) is a globulin protein that in humans is encoded by the SERPINA7 gene. TBG binds thyroid hormones in circulation. It is one of three transport proteins (along with transthyretin and serum albumin) responsible for carrying the thyroid hormones thyroxine (T4) and triiodothyronine (T3) in the bloodstream. Of these three proteins, TBG has the highest affinity for T4 and T3 but is present in the lowest concentration. Despite its low concentration, TBG carries the majority of T4 in the blood plasma. Due to the very low concentration of T4 and T3 in the blood, TBG is rarely more than 25% saturated with its ligand. Unlike transthyretin and albumin, TBG has a single binding site for T4/T3. TBG is synthesized primarily in the liver as a 54-kDa protein. In terms of genomics, TBG is a serpin; however, it has no inhibitory function like many other members of this class of proteins.

The thyroid hormone receptor (TR) is a type of nuclear receptor that is activated by binding thyroid hormone. TRs act as transcription factors, ultimately affecting the regulation of gene transcription and translation. These receptors also have non-genomic effects that lead to second messenger activation, and corresponding cellular response. 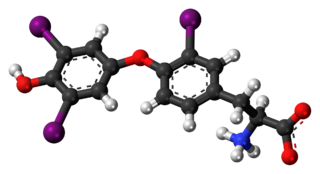 Euthyroid sick syndrome (ESS) is a state of adaptation or dysregulation of thyrotropic feedback control wherein the levels of T3 and/or T4 are abnormal, but the thyroid gland does not appear to be dysfunctional. This condition may result from allostatic responses of hypothalamsus-pituitary-thyroid feedback control, dyshomeostatic disorders, drug interferences and impaired assay characteristics in critical illness.

Protein delta homolog 1 is a protein that in humans is encoded by the DLK1 gene.

SECIS-binding protein 2 is a protein that in humans is encoded by the SECISBP2 gene.

Ubiquitin carboxyl-terminal hydrolase 33 is an enzyme that in humans is encoded by the USP33 gene. 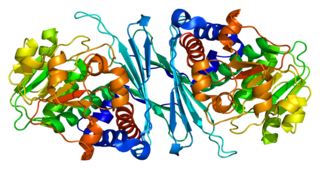 Mu-crystallin homolog also known as NADP-regulated thyroid-hormone-binding protein (THBP) is a protein that in humans is encoded by the CRYM gene. Multiple alternatively spliced transcript variants have been found for this gene.

Ubiquitin carboxyl-terminal hydrolase 20 is an enzyme that in humans is encoded by the USP20 gene.

Iopanoic acid is an iodine-containing radiocontrast medium used in cholecystography. Both iopanoic acid and ipodate sodium are potent inhibitors of thyroid hormone release from thyroid gland, as well as of peripheral conversion of thyroxine (T4) to triiodothyronine (T3). These compounds inhibit 5'deiodinase (5'DID-1 and 5'DID-2) enzymes, which catalyse T4-T3 conversion in the thyroid cell, liver, kidney, skeletal muscle, heart, brain, pituitary. This accounts for the dramatic improvement in both subjective and objective symptoms of hyperthyroidism, particularly when they are used as an adjunctive therapy with thioamides (propylthiouracil, carbimazole). They can be used in the treatment of patients with severe thyrotoxicosis (thyroid storm) and significant morbidity (e.g., myocardial infarction, or stroke) for rapid control of elevated plasma triiodothyronine concentrations. The use of iopanoic acid for treatment of thyrotoxicosis has been discontinued in the United States.

Deiodinase is a peroxidase enzyme that is involved in the activation or deactivation of thyroid hormones.