Tienilic acid (INN and BAN) or ticrynafen (USAN) is a loop diuretic drug with uric acid-lowering (uricosuric) action, [1] [2] formerly marketed for the treatment of hypertension. It was approved by FDA on May 2, 1979, and withdrawn in 1982, after case reports in the United States indicated a link between the use of ticrynafen and hepatitis. [3]

Criminal charges were brought against SmithKline executives with regard to hiding data related to toxicity while gaining FDA approval. The company pleaded guilty to 14 counts of failure to report adverse reactions and 20 counts of selling a misbranded drug. [4]

Tienilic acid was found to act as a suicide substrate at the cytochrome P450 enzymes involved in drug metabolism. However, the metabolic reaction carried out by these enzymes converted tienilic acid to a thiophene sulfoxide which was highly electrophilic. This encouraged a Michael reaction leading to alkylation of a thiol group in the enzyme's active site. Loss of water from the thiophene sulfoxide restored the thiophene ring and resulted in tienilic acid being covalently linked to the enzyme, thus inhibiting the enzyme irreversibly. [5]

In addition sera of patients who had liver failure after taking this drug contained antibodies recognizing CYP2C9 able to hydroxylate the drug and to give covalent binding. [6]

The above explanation is a hypothesis. It is still not known (after 15 years) if the reactive intermediate which inactivates the CYP2C9 is the thiophene sulfoxide or the thiophene epoxide. The target on the protein is also not known (could be multiple). However tienilic acid is a good mechanism based inhibitor of CYP2C9 and seems to inactivate it stoichiometrically. Progress in proteomics may one day give the answer.

Thiophene is a heterocyclic compound with the formula C4H4S. Consisting of a planar five-membered ring, it is aromatic as indicated by its extensive substitution reactions. It is a colorless liquid with a benzene-like odor. In most of its reactions, it resembles benzene. Compounds analogous to thiophene include furan (C4H4O) selenophene (C4H4Se) and pyrrole (C4H4NH), which each vary by the heteroatom in the ring.

Cytochromes P450 (CYPs) are a superfamily of enzymes containing heme as a cofactor that function as monooxygenases. In mammals, these proteins oxidize steroids, fatty acids, and xenobiotics, and are important for the clearance of various compounds, as well as for hormone synthesis and breakdown. In plants, these proteins are important for the biosynthesis of defensive compounds, fatty acids, and hormones.

Cytochrome P450 3A4 is an important enzyme in the body, mainly found in the liver and in the intestine. It oxidizes small foreign organic molecules (xenobiotics), such as toxins or drugs, so that they can be removed from the body. 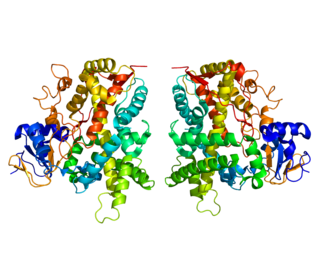 Cytochrome P450 2E1 is a member of the cytochrome P450 mixed-function oxidase system, which is involved in the metabolism of xenobiotics in the body. This class of enzymes is divided up into a number of subcategories, including CYP1, CYP2, and CYP3, which as a group are largely responsible for the breakdown of foreign compounds in mammals.

Toxication or toxification is the conversion of a chemical compound into a more toxic form in living organisms or in substrates such as soil or water. The conversion can be caused by enzymatic metabolism in the organisms, as well as by abiotic chemical reactions. While the parent drug are usually less active, both the parent drug and its metabolite can be chemically active and cause toxicity, leading to mutagenesis, teratogenesis, and carcinogenesis. Different classes of enzymes, such as P450-monooxygenases, epoxide hydrolase, or acetyltransferases can catalyze the process in the cell, mostly in the liver.

Cytochrome P450 2A6 is a member of the cytochrome P450 mixed-function oxidase system, which is involved in the metabolism of xenobiotics in the body. CYP2A6 is the primary enzyme responsible for the oxidation of nicotine and cotinine. It is also involved in the metabolism of several pharmaceuticals, carcinogens, and a number of coumarin-type alkaloids. CYP2A6 is the only enzyme in the human body that appreciably catalyzes the 7-hydroxylation of coumarin, such that the formation of the product of this reaction, 7-hydroxycoumarin, is used as a probe for CYP2A6 activity.

Cytochrome P450 1A2, a member of the cytochrome P450 mixed-function oxidase system, is involved in the metabolism of xenobiotics in the body. In humans, the CYP1A2 enzyme is encoded by the CYP1A2 gene.

The epoxyeicosatrienoic acids or EETs are signaling molecules formed within various types of cells by the metabolism of arachidonic acid by a specific subset of Cytochrome P450 enzymes termed cytochrome P450 epoxygenases. These nonclassic eicosanoids are generally short-lived, being rapidly converted from epoxides to less active or inactive dihydroxy-eicosatrienoic acids (diHETrEs) by a widely distributed cellular enzyme, Soluble epoxide hydrolase (sEH), also termed Epoxide hydrolase 2. The EETs consequently function as transiently acting, short-range hormones; that is, they work locally to regulate the function of the cells that produce them or of nearby cells. The EETs have been most studied in animal models where they show the ability to lower blood pressure possibly by a) stimulating arterial vasorelaxation and b) inhibiting the kidney's retention of salts and water to decrease intravascular blood volume. In these models, EETs prevent arterial occlusive diseases such as heart attacks and brain strokes not only by their anti-hypertension action but possibly also by their anti-inflammatory effects on blood vessels, their inhibition of platelet activation and thereby blood clotting, and/or their promotion of pro-fibrinolytic removal of blood clots. With respect to their effects on the heart, the EETs are often termed cardio-protective. Beyond these cardiovascular actions that may prevent various cardiovascular diseases, studies have implicated the EETs in the pathological growth of certain types of cancer and in the physiological and possibly pathological perception of neuropathic pain. While studies to date imply that the EETs, EET-forming epoxygenases, and EET-inactivating sEH can be manipulated to control a wide range of human diseases, clinical studies have yet to prove this. Determination of the role of the EETS in human diseases is made particularly difficult because of the large number of EET-forming epoxygenases, large number of epoxygenase substrates other than arachidonic acid, and the large number of activities, some of which may be pathological or injurious, that the EETs possess.

Cytochrome P450 2C9 is an enzyme that in humans is encoded by the CYP2C9 gene. 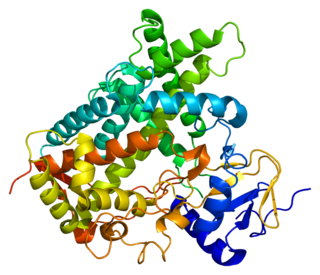 Cytochrome P450 2C19 is an enzyme protein. It is a member of the CYP2C subfamily of the cytochrome P450 mixed-function oxidase system. This subfamily includes enzymes that catalize metabolism of xenobiotics, including some proton pump inhibitors and antiepileptic drugs. In humans, it is the CYP2C19 gene that encodes the CYP2C19 protein. CYP2C19 is a liver enzyme that acts on at least 10% of drugs in current clinical use, most notably the antiplatelet treatment clopidogrel (Plavix), drugs that treat pain associated with ulcers, such as omeprazole, antiseizure drugs such as mephenytoin, the antimalarial proguanil, and the anxiolytic diazepam. 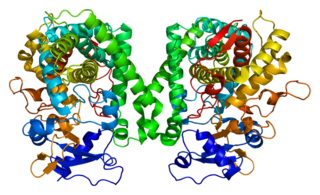 Cytochrome P450, family 1, subfamily A, polypeptide 1 is a protein that in humans is encoded by the CYP1A1 gene. The protein is a member of the cytochrome P450 superfamily of enzymes.

Cytochrome P450 4A11 is a protein that in humans is codified by the CYP4A11 gene.

Cytochrome P450 4F12 is a protein that in humans is encoded by the CYP4F12 gene.

Epoxygenases are a set of membrane-bound, heme-containing cytochrome P450 enzymes that metabolize polyunsaturated fatty acids to epoxide products that have a range of biological activities. The most thoroughly studied substrate of the CYP epoxylgenases is arachidonic acid. This polyunsaturated fatty acid is metabolized by cyclooxygenases to various prostaglandin, thromboxane, and prostacyclin metabolites in what has been termed the first pathway of eicosanoid production; it is also metabolized by various lipoxygenases to hydroxyeicosatetraenoic acids and leukotrienes in what has been termed the second pathway of eicosanoid production. The metabolism of arachidonic acid to epoxyeicosatrienoic acids by the CYP epoxygenases has been termed the third pathway of eicosanoid metabolism. Like the first two pathways of eicosanoid production, this third pathway acts as a signaling pathway wherein a set of enzymes metabolize arachidonic acid to a set of products that act as secondary signals to work in activating their parent or nearby cells and thereby orchestrate functional responses. However, none of these three pathways is limited to metabolizing arachidonic acid to eicosanoids. Rather, they also metabolize other polyunsaturated fatty acids to products that are structurally analogous to the eicosanoids but often have different bioactivity profiles. This is particularly true for the CYP epoxygenases which in general act on a broader range of polyunsaturated fatty acids to form a broader range of metabolites than the first and second pathways of eicosanoid production. Furthermore, the latter pathways form metabolites many of which act on cells by binding with and thereby activating specific and well-characterized receptor proteins; no such receptors have been fully characterized for the epoxide metabolites. Finally, there are relatively few metabolite-forming lipoxygenases and cyclooxygenases in the first and second pathways and these oxygenase enzymes share similarity between humans and other mammalian animal models. The third pathway consists of a large number of metabolite-forming CYP epoxygenases and the human epoxygenases have important differences from those of animal models. Partly because of these differences, it has been difficult to define clear roles for the epoxygenase-epoxide pathways in human physiology and pathology.

Methiopropamine (MPA) is a thiophene ring-based structural analog of methamphetamine originally reported in 1942. Chemically it is not a phenethylamine or amphetamine and is not their functional analog either. It originally appeared for public sale in the UK in December 2010 as a "research chemical" or "legal high", recently branded as Blow. It has limited popularity as a recreational stimulant.

Thiopropamine is a stimulant drug which is an analogue of amphetamine where the phenyl ring has been replaced by thiophene. It has similar stimulant effects to amphetamine but with around one third the potency. The N-methyl and thiophen-3-yl analogues are also known and are somewhat more potent, though still generally weaker than the corresponding amphetamines.

Epoxyeicosatetraenoic acids are a set of biologically active epoxides that various cell types make by metabolizing the omega 3 fatty acid, eicosapentaenoic acid (EPA), with certain cytochrome P450 epoxygenases. These epoxygenases can metabolize EPA to as many as 10 epoxides that differ in the site and/or stereoisomer of the epoxide formed; however, the formed EEQs, while differing in potency, often have similar bioactivities and are commonly considered together.