Time management games are in a subgenre of strategy and casual games focused around fast real time allocation of resources in a consequent order to fulfill the level objectives. The player must react to the incoming requests that occur as they play and serve them in the most effective manner to get the greatest possible reward. They are usually limited in time, and their resources limit the speed at which they can serve the requests. Tapper and Diner Dash are popular games in the genre.

Most time-management games don't employ war themes, instead using work themes; the goals of most strategy games are often to conquer a foe, while time management goals are usually to make enough money by doing work in the most effective manner. [4] Unlike strategy games that are often focused on the multiplayer gameplay, time management games are single-player by nature. The art theme is usually friendly, cheerful and simple as it is a common practice in casual games.[ citation needed ]

The 1983 arcade game Tapper is the prototypical time management game, where the player is a bartender who must serve patrons before their patience expires. [1] Later games often feature more tasks, similar to the successful Diner Dash [1] [5] [3] from 2004 that tasked players with restaurant activities from seating customers to washing dishes. [6] Other examples of time management games include Airport Mania , Delicious , and Flight Control.

A typical time management game is a progression of levels, each of which sets a goal and a time limit for the player. The goal of a level is typically to complete enough sub-goals within a given time limit. In a level, the player sets priorities (or immediate actions) for actors in order to satisfy appearing sub-goals that can be represented (e.g., as clients who want service or planes that need to land). In some games, consecutive actions may be queued for the actors. The actors will then do the actions in the order set by player with their speed. Usually, if the action is performed too late, a sub-goal is failed.

The frequency of responses by the player increases as the game progresses in difficulty. [1] The player may have the possibility to upgrade their available resources by spending the earned rewards; between the levels, the players would upgrade their actors using game currency earned in the level (e.g., make them move faster, make clients wait longer before failing a sub-goal, serve more clients simultaneously).

A typical setting for a time management game puts a player in a position of some kind of service worker (e.g., waiter or cook in a restaurant, airport dispatcher, office manager), [4] though exceptions exist.

Real-time strategy (RTS) is a subgenre of strategy video games that do not progress incrementally in turns, but allow all players to play simultaneously, in "real time". By contrast, in turn-based strategy (TBS) games, players take turns to play. The term "real-time strategy" was coined by Brett Sperry to market Dune II in the early 1990s.

Survival horror is a subgenre of action-adventure and horror video games that focuses on survival of the character as the game tries to frighten players with either horror graphics or scary ambience. Although combat can be part of the gameplay, the player is made to feel less in control than in typical action games through limited ammunition or weapons, health, speed and vision, or through various obstructions of the player's interaction with the game mechanics. The player is also challenged to find items that unlock the path to new areas and solve puzzles to proceed in the game. Games make use of strong horror themes, like dark mazelike environments and unexpected attacks from enemies.

A god game is an artificial life game that casts the player in the position of controlling the game on a large scale, as an entity with divine and supernatural powers, as a great leader, or with no specified character, and places them in charge of a game setting containing autonomous characters to guard and influence.

A sports video game is a video game that simulates the practice of sports. Most sports have been recreated with a game, including team sports, track and field, extreme sports, and combat sports. Some games emphasize actually playing the sport, whilst others emphasize strategy and sport management. Some, such as Need for Speed, Arch Rivals and Punch-Out!!, satirize the sport for comic effect. This genre has been popular throughout the history of video games and is competitive, just like real-world sports. A number of game series feature the names and characteristics of real teams and players, and are updated annually to reflect real-world changes. The sports genre is one of the oldest genres in gaming history.

A music video game, also commonly known as a music game, is a video game where the gameplay is meaningfully and often almost entirely oriented around the player's interactions with a musical score or individual songs. Music video games may take a variety of forms and are often grouped with puzzle games due to their common use of "rhythmically generated puzzles".

A massively multiplayer online game is an online game with large numbers of players, often hundreds or thousands, on the same server. MMOs usually feature a huge, persistent open world, although there are games that differ. These games can be found for most network-capable platforms, including the personal computer, video game console, or smartphones and other mobile devices.

Cheating in online games is the subversion of the rules or mechanics of online video games to gain an unfair advantage over other players, generally with the use of third-party software. What constitutes cheating is dependent on the game in question, its rules, and consensus opinion as to whether a particular activity is considered to be cheating.

Permadeath or permanent death is a game mechanic in both tabletop games and video games in which player characters who lose all of their health are considered dead and cannot be used anymore. Depending on the situation, this could require the player to create a new character to continue, or completely restart the game potentially losing nearly all progress made. Other terms include persona death and player death. Some video games offer a hardcore mode that features this mechanic, rather than making it part of the core game.

A casual game is a video game targeted at a mass market audience, as opposed to a hardcore game, which is targeted at hobbyist gamers. Casual games may exhibit any type of gameplay and genre. They generally involve simpler rules, shorter sessions, and require less learned skill. They don't expect familiarity with a standard set of mechanics, controls, and tropes. 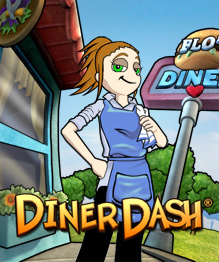 Diner Dash is a strategy and time management video game initially developed by Gamelab and published by PlayFirst. It is now owned and published by Glu Mobile. It was one of the top-selling downloadable games of all-time, available in multiple platforms such as PC, Mac, consoles, and mobile.

In video games, a raid is a type of mission in massively multiplayer online role-playing games (MMORPGs) where a number of people attempt to defeat either: (a) another number of people at player-vs-player (PVP), (b) a series of computer-controlled enemies in a player-vs-environment (PVE) battlefield, or (c) a very powerful boss (superboss). This type of objective usually occurs within an instance dungeon, a separate server instance from the other players in the game.

Diner Dash: Hometown Hero is the fourth installment in the Diner Dash series of casual games. It was developed and published by PlayFirst. it was launched on September 25, 2007.

Construction and management simulation (CMS), sometimes also called management sim or building sim, is a subgenre of simulation game in which players build, expand or manage fictional communities or projects with limited resources. Strategy video games sometimes incorporate CMS aspects into their game economy, as players must manage resources while expanding their project. Pure CMS games differ from strategy games, however, in that "the player's goal is not to defeat an enemy, but to build something within the context of an ongoing process." Games in this category are sometimes also called "management games".