Turn-based tactics [1] [2] (TBT), or tactical turn-based [3] (TTB), is a computer and video game genre of strategy video games that through stop-action simulates the considerations and circumstances of operational warfare and military tactics in generally small-scale confrontations as opposed to more strategic considerations of turn-based strategy (TBS) games.

Turn-based tactical gameplay is characterized by the expectation of players to complete their tasks using only the combat forces provided to them, and usually by the provision of a realistic (or at least believable) representation of military tactics and operations.

The gameplay of turn-based tactics game is the stop-action counterpart to that found in the real-time tactics genre, and as such contrasts with other current wargame genres. For instance, in large-scale turn-based strategy games battles are generally abstracted and the gameplay close to that of related board games, and real-time strategy games de-emphasize realism and focus on the collection and conversion of resources into production capacities which manufacture combat units thereafter used in generally highly stylised confrontations. In contrast, turn-based tactics games' military tactical and realistic focus, emphasis on executing intricate and well thought through plans and comparatively short risk/reward cycle usually provide a distinctly more immediate, intense, careful and meticulous experience of battlefield tactics and mêlée than strategy games of other genres.

As suggested by the genre's name, also fundamental to turn-based tactics is turn-based gameplay. The genre has its roots in tactical and miniature wargaming, the recreation of battle scenarios using miniatures or even simple paper chits using relatively intricate rules. Compared to other strategy games, games of the turn-based tactics genre often have distinctly detailed and complex environments due to the tactical implications of elevation, hard cover and line of sight. Further, in most turn-based tactics games a player's force is maintained between battles. This allows units to become more proficient as they gain more battle experience and coupled with the often small and specialised squads used, can even encourage an affinity between the player and his or her troops, breaking down the stereotypical anonymity of the expendable, mass-produced units found in strategic games.

And the first time the system was properly built was the Fire Emblem: Shadow Dragon and the Blade of Light, which was launched in 1990.

Battle Isle is a series of games developed starting in 1991 by Blue Byte. Set on a fictional planet, Chromos, and inspired by the Japanese game Nectaris (1989), the games feature futuristic tactical battles played on a hexagonal grid. Players control combat units, ranging from infantry and tanks to helicopters, fighters and bombers; as well as (especially in the later games) support units, including ammo and fuel transports, scout and radar units, and road and trench construction vehicles. Battle Isle also spawned a man-to-man wargame, Incubation: Time Is Running Out (1997), an even earlier strategy title to use fully 3D graphics and support hardware acceleration on the 3dfx Voodoo.

Another game originally scheduled to be a computerized Squad Leader/ASL was Combat Mission . While not the first 3-D tactical warfare game, it set an industry standard for realism, thanks to minutely detailed armor penetration modelling. There was no first-person element to the game, which placed a realistic burden of command on the player, and unlike earlier games like M-1 Tank Platoon or Muzzle Velocity, human intervention wasn't necessary to ensure that one's troops were capable of fighting with the same skill as the computer enemy. Combat Mission: Beyond Overlord received critical acclaim upon release in 2000. Two follow up games were released in 2002 and 2004, which improved the infantry game with better suppression and automatic fire modelling. The game featured a "WEGO" system, where orders were entered sequentially, and the turn was then executed simultaneously, with a "Tactical AI" carrying out both sets of orders. This type of system had been what the original board wargame designers of Firefight et al. had dreamed of, but were restricted to creating manually.

Tactical wargames are a type of wargames (board game or video game) that models military conflict at a tactical level, i.e. units range from individual vehicles and squads to platoons or companies. These units are rated based on types and ranges of individual weaponry.

This subgenre is principally used to refer to RPG-derived games as an alternative to the traditional turn-based system. In such titles, the system has been tailored to incorporate role-playing game characteristics. The term "tactical" was not widely used to describe such titles until Final Fantasy Tactics was released, where it popularized the genre in North America, although games such as Shining Force were part of the genre years beforehand. 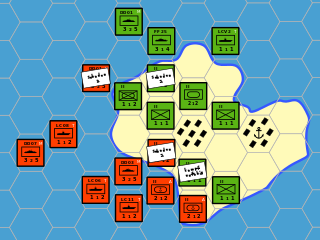 A wargame is a game that realistically simulates warfare, as opposed to abstract strategy games such as chess. Wargaming may be played for recreation, to train military officers in the art of strategic thinking, or to study the nature of potential conflicts. Many wargames recreate specific historic battles, and can cover either whole wars, or any campaigns, battles, or lower-level engagements within them. Many simulate land combat, but there are wargames for naval and air combat as well.

Real-time strategy (RTS) is a sub-genre of strategy video games that do not progress incrementally in turns, but allow all players to play simultaneously, in "real time". By contrast, in turn-based strategy (TBS) games, players take turns to play. The term "real-time strategy" was coined by Brett Sperry to market Dune II in the early 1990s.

A turn-based strategy (TBS) game is a strategy game where players take turns when playing. This is distinguished from real-time strategy (RTS), in which all players play simultaneously.

Steel Beasts is the name for a family of tank simulators created by eSim Games for Microsoft Windows. 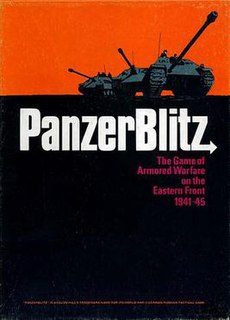 PanzerBlitz is a tactical-scale board wargame of armoured combat set in the Eastern Front of the Second World War. The game is notable for being the first true board-based tactical-level, commercially available conflict simulation (wargame). It also pioneered concepts such as isomorphic mapboards and open-ended design, in which multiple unit counters were provided from which players could fashion their own free-form combat situations rather than simply replaying pre-structured scenarios.

A man-to-man wargame is a wargame in which units generally represent single individuals or weapons systems, and are rated not only on weaponry but may also be rated on such facets as morale, perception, skill-at-arms, etc. The game is designed so that a knowledge of military tactics, especially at the small unit or squad level, will facilitate successful gameplay. Man-to-man wargames offer an extreme challenge to the designer, as fewer variables or characteristics inherent in the units being simulated are directly quantifiable. Modern commercial board wargaming stayed away from man-to-man subjects for many years, though once the initial attempts were made to address the subject, it has evolved into a popular topic among wargamers.

Tactical wargames are a type of wargame that models military conflict at a tactical level, i.e. units range from individual vehicles and squads to platoons or companies. These units are rated based on types and ranges of individual weaponry. The first tactical wargames were played as miniatures, extended to board games, and they are now also enjoyed as video games.

Real-time tactics or RTT is a subgenre of tactical wargames played in real-time simulating the considerations and circumstances of operational warfare and military tactics. It is differentiated from real-time strategy gameplay by the lack of classic resource micromanagement and base or unit building, as well as the greater importance of individual units and a focus on complex battlefield tactics.

Panzer Strike is a 1988 tactical wargame that simulates small unit actions during World War II. It was made for Apple II and Commodore 64 and was released by Strategic Simulations.

A computer wargame is a wargame played on a digital device. Descended from board wargaming, it simulates military conflict at the tactical, operational or strategic level. Computer wargames are both sold commercially for recreational use and, in some cases, used for military purposes.

Fire-Brigade: The Battle for Kiev - 1943 is a wargame developed and published by Panther Games in Australia in 1988. The game is set around the historical WWII Eastern Front Battle of Kiev in 1943. 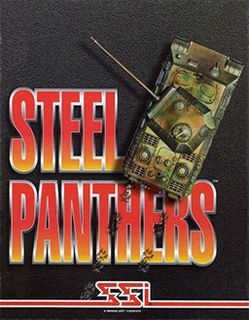 Steel Panthers is a 1995 computer wargame developed and published by Strategic Simulations. Designed by Gary Grigsby and Keith Brors, it simulates ground warfare during World War II, across the Western Front, Eastern Front and Pacific Theatre.

The Great Battles of Alexander is a 1997 turn-based computer wargame developed by Erudite Software and published by Interactive Magic. Adapted from the GMT Games physical wargame of the same name, it depicts 10 of Alexander the Great's key conflicts, and simulates the interplay between Ancient Macedonian battle tactics and its rival military doctrines. Gameplay occurs at the tactical level: players direct predetermined armies on discrete battlefields, in a manner that one commentator compared to chess.

Steel Panthers II: Modern Battles is a 1996 computer wargame developed and published by Strategic Simulations. It is the sequel to Steel Panthers and the second entry in the Steel Panthers series. The game was designed by Gary Grigsby and Keith Brors.