Maze game is a video game genre description first used by journalists during the 1980s to describe any game in which the entire playing field is a maze. Quick player action is required to escape monsters, outrace an opponent, or navigate the maze within a time limit. After the release of Namco's Pac-Man in 1980, many maze games followed its conventions of completing a level by traversing all paths and a way of temporarily turning the tables on pursuers.

In a top down maze game, the player can see more of the maze than can the characters who are in it. In rare cases, the maze is vertically-oriented and viewed from the side rather than the top.

Maze chase games are a specific subset of the top down perspective. They’re listed in a separate section.

This subgenre is exemplified by Namco's Pac-Man (1980), [22] where the goal is to clear a maze of dots while being pursued. Pac-Man spawned many sequels and clones which, in Japan, are often called "dot eat games". Other maze chases don't have dots, and the goal is clear the maze of the pursuers themselves (e.g., Pengo , Guzzler , Jungler ).

In grid capture games, also called line coloring games, the maze consists of lines, and the goal is to capture rectangular areas by traversing their perimeters. The gameplay is not fundamentally different from Pac-Man (players still have to navigate the entire maze to complete a level) but enough games have used the grid motif that it is a distinct style. One unique element is that it is possible to capture multiple rectangles simultaneously, usually for extra points. Amidar established the model for this subgenre. 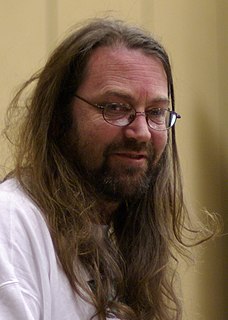 Jeff Minter is an independent English video game designer and programmer who often goes by the name Yak. He is the founder of software house Llamasoft and has created dozens of games during his career, which began in 1981 with games for the Sinclair ZX80. Minter's games are often arcade style shoot 'em ups which contain titular or in-game references demonstrating his fondness of ruminants. Many of his programs also feature something of a psychedelic element, as in some of the earliest "light synthesizer" programs including Trip-a-Tron.

Centipede is a 1981 fixed shooter arcade game developed and published by Atari, Inc. Designed by Dona Bailey and Ed Logg, it was one of the most commercially successful games from the golden age of arcade video games and one of the first with a significant female player base. The primary objective is to shoot all the segments of a centipede that winds down the playing field. An arcade sequel, Millipede, followed in 1982.

Ms. Pac-Man is a 1982 maze arcade game developed by General Computer Corporation and published by Midway. It is the first sequel to Pac-Man (1980) and the first entry in the series to not be made by Namco. Controlling the titular character, the player is tasked with eating all of the pellets in an enclosed maze while avoiding four colored ghosts. Eating the larger "power pellets" lets the player eat the ghosts, who turn blue and flee.

1983 has seen many sequels and prequels in video games, such as Mario Bros. and Pole Position II, along with new titles such as Astron Belt, Champion Baseball, Dragon's Lair, Elevator Action, Spy Hunter and Track & Field. Major events include the video game crash of 1983 in North America, and the third generation of video game consoles beginning with the launch of Nintendo's Family Computer (Famicom) and Sega's SG-1000 in Japan. The year's highest-grossing video game was Namco's arcade game Pole Position, while the year's best-selling home system was Nintendo's Game & Watch for the third time since 1980.

Pengo (ペンゴ) is an arcade game developed by Coreland and published by Sega in Japan on September 26th, 1982, then to North America the following month. Along with Europe on December 1982. The player controls Pengo, a red penguin that resides in the Antarctic. The game takes place in an overhead maze made of ice blocks, where Pengo crushes blob-like Sno-Bees by sliding blocks into them. The objective is to survive each round by eliminating all Sno-Bees and Sno-Bee eggs, while optionally lining up the three diamond blocks for a large bonus.

Jr. Pac-Man is an arcade game, developed by General Computer Corporation and released by Bally Midway on August 13, 1983. Unlike prior games in the series, the maze in Jr. Pac-Man scrolls horizontally and has no escape tunnels.

Buck Rogers: Planet of Zoom, known as Zoom 909 in Japan, is a pseudo-3D rail shooter video game released in arcades by Sega in 1982. The game is a forward-scrolling rail shooter where the player controls a spaceship in a third-person perspective, adapting the three-dimensional perspective of Sega's earlier racing game Turbo (1981) for the space shoot 'em up genre. It used the Buck Rogers license, referencing the space battles, though Buck himself is never seen. 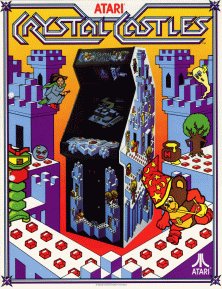 Crystal Castles is an arcade game released by Atari, Inc. in 1983. The player controls Bentley Bear who has to collect gems located throughout trimetric-projected rendered castles while avoiding enemies, some of whom are after the gems as well. Crystal Castles is one of the first arcade action games with an ending, instead of continuing indefinitely, looping, or ending in a kill screen, and to contain advance warp zones.

Super Pac-Man is a 1982 maze chase arcade game developed and published by Namco. It was distributed in North America by Midway Games. Super Pac-Man is Namco's take on a sequel to the original Pac-Man; Midway had previously released Ms. Pac-Man, which Namco had little involvement with. Toru Iwatani returns as designer.

1982 was the peak year for the golden age of arcade video games as well as the second generation of video game consoles. Many games were released that would spawn franchises, or at least sequels, including Dig Dug, Pole Position, Mr. Do!, Zaxxon, Q*bert, Time Pilot and Pitfall! The year's highest-grossing video game was Namco's arcade game Pac-Man, for the third year in a row, while the year's best-selling home system was the Atari 2600. Additional game consoles added to a crowded market, notably the ColecoVision and Atari 5200. Troubles at Atari late in the year triggered the video game crash of 1983.

Fueled by the previous year's release of the colorful and appealing Pac-Man, the audience for arcade games in 1981 became much wider. Pac-Man influenced maze games began appearing in arcades and on home systems. Pac-Man was again the year's highest-grossing video game for the second year in a row. Nintendo released the arcade game Donkey Kong, which defined the platformer genre. Other arcade hits released in 1981 include Defender, Scramble, Frogger, Galaga and Zaxxon. The year's best-selling home system was Nintendo's Game & Watch, for the second year in a row.

H.E.R.O. is a video game written by John Van Ryzin and published by Activision for the Atari 2600 in March 1984. It was ported to the Apple II, Atari 5200, Atari 8-bit family, ColecoVision, Commodore 64, MSX, and ZX Spectrum. The player uses a helicopter backpack and other tools to rescue victims trapped deep in a mine. The mine is made up of multiple screens using a flip screen style. 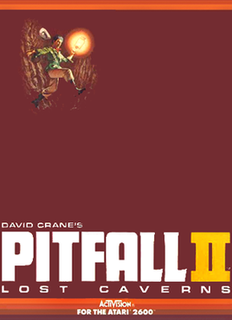 Pitfall II: Lost Caverns is a platform video game originally released for the Atari 2600 by Activision in 1984. It is the sequel to Pitfall! (1982). Both games were designed and programmed by David Crane and star jungle explorer Pitfall Harry. Pitfall II's major additions are a much larger world with vertical scrolling, swimmable rivers with deadly eels, music, and balloons for floating between locations. 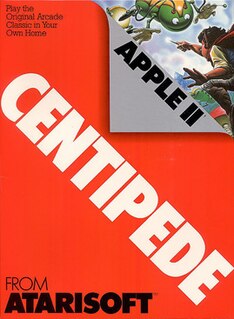 Atarisoft was a brand name used by Atari, Inc in 1983 and 1984 to market video games the company published for home systems made by competitors. Each platform had a specific color attributed by Atarisoft for its game packages. For example, video games sold for the Commodore 64 came up in green packages, games for the Texas Instruments TI-99/4A in yellow, games for the IBM PC in blue, and so on. 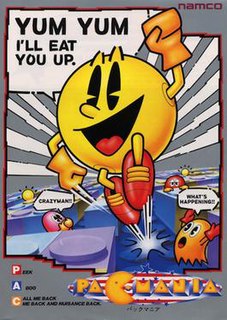 Pac-Mania is an isometric maze game that was developed and released by Namco for arcades in 1987. In the game, the player controls Pac-Man as he must eat all of the dots while avoiding the colored ghosts that chase him in the maze. Eating large flashing "Power Pellets" will allow Pac-Man to eat the ghosts for bonus points, which lasts for a short period of time. A new feature to this game allows Pac-Man to jump over the ghosts to evade capture. It is the ninth title in the Pac-Man video game series and was the last one developed for arcades up until the release of Pac-Man Arrangement in 1996. Development was directed by Pac-Man creator Toru Iwatani. It was licensed to Atari Games for release in North America. 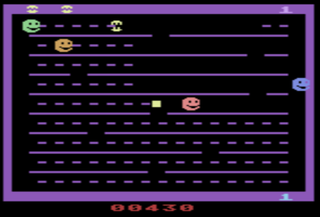 Jawbreaker is a Pac-Man clone programmed by John Harris for the Atari 8-bit family and published by On-Line Systems. Released in 1981 before an official version of Pac-Man was available, it was widely lauded by reviewers, and became a major seller. The story of its creation and Harris's Atari 8-bit implementation of Frogger form a portion of Steven Levy's 1984 book, Hackers: Heroes of the Computer Revolution. 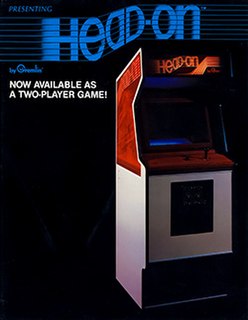 Atlantis Software was a London-based UK computer games publisher that published a number of games during the 1980s and early 1990s.