In the United States, trolley parks, which started in the 19th century, were picnic and recreation areas along or at the ends of streetcar lines in most of the larger cities. These were precursors to amusement parks. Trolley parks were often created by the streetcar companies to give people a reason to use their services on weekends. [1]

The parks originally consisted of picnic groves and pavilions, and often held events such as dances, concerts and fireworks. Many eventually added features such as swimming pools, carousels, Ferris wheels, roller coasters, sports fields, boats rides, restaurants and other resort facilities to become amusement parks. Various sources report the existence of between 1,500 and 2,000 amusement parks in the United States by 1919. [2]

One such location was Coney Island in Brooklyn, New York, where a horse-drawn street car line brought pleasure seekers to the beach beginning in 1829. In 1875, a million passengers rode the Coney Island Railroad, and in 1876 two million reached Coney Island. Hotels and amusements were built to accommodate both the upper-classes and the working-class. The first carousel was installed in the 1870s, the first Switchback Railway in 1881. It wasn't until 1895 that the first permanent amusement park in North America opened: Sea Lion Park at Coney Island. This park was one of the first to charge admission for entrance to the park in addition to selling tickets for rides within the park. [2]

In 1897, it was joined by Steeplechase Park, the first of three major amusement parks that would open in the area. George Tilyou designed the park to provide thrills and sweep away the restraints of the Victorian crowds. The combination of the nearby population center of New York City and the ease of access to the area made Coney Island the embodiment of the American amusement park. [2] In addition there was Luna Park (opened in 1903) and Dreamland (opened in 1904). Coney Island was a huge success, and by 1910 attendance on a Sunday could reach a million people. [2]

By the early 20th century, there were hundreds of amusement parks, many of them starting as trolley parks, in operation around the USA. Every major city boasted one or more parks, often based on (or named) Coney Island, Luna Park, or Dreamland. This began the era of the “golden age” of amusement parks that reigned until the late 1920s. This was an era when the number of hours worked was reduced, while the amount of disposable income rose. The amusement parks reflected the mechanization and efficiency of industrialization, while serving as a source of fantasy and escape from real life. [2]

With the increasing number of automobiles in use, urban trolley parks gradually declined, due to lack of parking and changing demographics in the urban areas. Although the automobile provided people with more options for satisfying their entertainment needs, amusement parks that were accessible by car continued to be successful and new parks were developed. It was urban trolley parks that saw declining attendance. By the end of the 1920s, amusement parks were to suffer steep declines for various reasons, particularly the Great Depression. [2]

Roxbury may refer to:

Luna Park is a name shared by dozens of currently operating and defunct amusement parks. They are named after, and partly based on, the first Luna Park, which opened in 1903 during the heyday of large Coney Island parks. Luna parks are considered as small-scale attraction parks, easily accessed, potentially addressed to the permanent or temporary residential market, and located in the suburbs or even near the town center. Luna parks mainly offer classic funfair attractions, newer features and catering services. 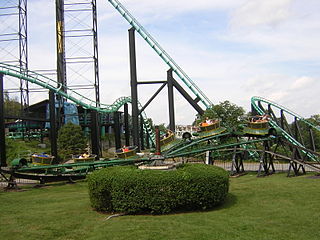 A Tumble Bug is an amusement park ride with a circular track.

The Rotor is an amusement ride designed and patented by German engineer Ernst Hoffmeister in 1948. The ride was first demonstrated at Oktoberfest 1949, and was exhibited at fairs and events throughout Europe, during the 1950s and 1960s. The ride still appears in numerous amusement parks, although travelling variants have been surpassed by the Gravitron.

Fascination is a game commonly found in North American amusement parks, boardwalks and arcades. The game would be considered in the same family as skee ball, in that prizes are often won for playing the game. The game dates to the 1920s as evidenced in pictures of Chutes at the Beach in San Francisco, a park that operated from 1903 - 1928.

Luna Park was a trolley park in Alexandria County, Virginia, that operated between 1906 and 1915. The Washington, Alexandria, and Mount Vernon Electric Railway constructed the amusement park for $350,000 in collaboration with the facility's designer and operator, Frederick Ingersoll.

Frederick Ingersoll was an American inventor, designer, builder and entrepreneur who created the world's first chain of amusement parks and whose manufacturing company built 277 roller coasters, fueling the popularity of trolley parks in the first third of the twentieth century. Some of these parks and roller coasters are still existing today.

Electric Park was a name shared by dozens of amusement parks in the United States that were constructed as trolley parks and owned by electric companies and streetcar companies. After 1903, the success of Coney Island inspired a proliferation of parks named Luna Park and Electric Park, while the World's Columbian Exposition of 1893 inspired the formation of White City amusement parks at roughly the same time. The existence of most of these parks was generally brief: the bulk of them closed by 1917, the year of the United States' entry into World War I. Many pavilions have outlasted the parks themselves, with a few of them still standing today.

White City is the common name of dozens of amusement parks in the United States, the United Kingdom, and Australia. Inspired by the White City and Midway Plaisance sections of the World's Columbian Exhibition of 1893, the parks started gaining in popularity in the last few years of the 19th century. After the 1901 Pan-American Exposition inspired the first Luna Park in Coney Island, a frenzy in building amusement parks ensued in the first two decades of the 20th century.