The middle temporal artery occasionally gives off a zygomatico-orbital branch, which runs along the upper border of the zygomatic arch, between the two layers of the temporal fascia, to the lateral angle of the orbit.

The middle temporal artery arises immediately above the zygomatic arch, and, perforating the temporal fascia, gives branches to the Temporalis, anastomosing with the deep temporal branches of the internal maxillary.

This branch, which may arise directly from the superficial temporal artery, supplies the orbicularis oculi, and anastomoses with the lacrimal and palpebral branches of the ophthalmic artery. 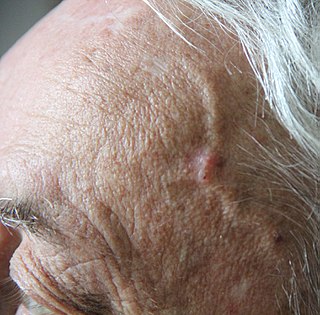 The ophthalmic artery (OA) is the first branch of the internal carotid artery distal to the cavernous sinus. Branches of the OA supply all the structures in the orbit as well as some structures in the nose, face and meninges. Occlusion of the OA or its branches can produce sight-threatening conditions. 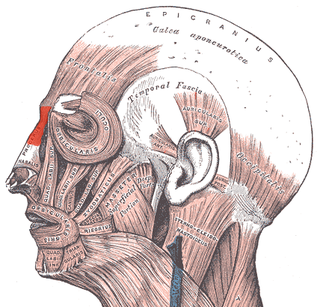 The procerus muscle is a small pyramidal slip of muscle deep to the superior orbital nerve, artery and vein. Procerus is Latin, meaning tall or extended.

The auriculotemporal nerve is a branch of the mandibular nerve (V3) that runs with the superficial temporal artery and vein, and provides sensory innervation to various regions on the side of the head.

The middle cerebral artery (MCA) is one of the three major paired arteries that supply blood to the cerebrum. The MCA arises from the internal carotid and continues into the lateral sulcus where it then branches and projects to many parts of the lateral cerebral cortex. It also supplies blood to the anterior temporal lobes and the insular cortices.

The cavernous sinus within the human head, is one of the dural venous sinuses creating a cavity called the lateral sellar compartment bordered by the temporal bone of the skull and the sphenoid bone, lateral to the sella turcica. 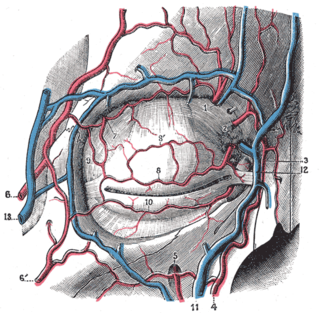 The transverse facial artery is an artery that branches from the superficial temporal artery and runs across the face.

The carotid canal is the passageway in the temporal bone through which the internal carotid artery enters the middle cranial fossa from the neck. The canal starts on the inferior surface of the temporal bone at the external opening of the carotid canal. The canal ascends at first superiorly, and then, making a bend, runs anteromedially. The canal's internal opening is near the foramen lacerum, above which the internal carotid artery passes on its way anteriorly to the cavernous sinus.

The middle cranial fossa, deeper than the anterior cranial fossa, is narrow medially and widens laterally to the sides of the skull. It is separated from the posterior fossa by the clivus and the petrous crest.

The lacrimal artery is an artery that arises close to the optic foramen, and is one of the largest branches derived from the ophthalmic artery. Not infrequently it is given off before the artery enters the orbit. 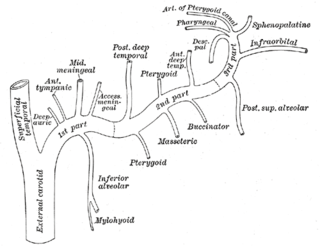 The infraorbital artery is an artery in the head that branches off the maxillary artery, emerging through the infraorbital foramen, just under the orbit of the eye.

The supraorbital artery is an artery of the head.

The medial palpebral arteries are arteries of the head. They are two in number, superior and inferior, arise from the ophthalmic, opposite the pulley of the Obliquus superior.

The deep temporal arteries, two in number, anterior and posterior, ascend between the temporalis and the pericranium. 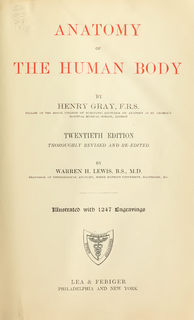