Cedarhurst is a village in Nassau County, on the South Shore of Long Island, New York, in the USA. The population was 6,592 according to the 2010 United States Census [3] estimates with a population increase of +2.2% since 2010 [4] The village is named after a grove of trees that once stood at the post office.

The village was incorporated in 1910. It is part of the "Five Towns," together with the village of Lawrence and the hamlets of Woodmere and Inwood, and "The Hewletts," which consist of the villages of Hewlett Bay Park, Hewlett Harbor and Hewlett Neck and the hamlet of Hewlett, along with Woodsburgh. [5]

Cedarhurst's early name was Ocean Point. Rail service arrived in 1869 which led people to the area, especially to the Rockaway Hunting Club, built in Cedarhurst in 1878. A post office was established in 1884, and Ocean Point was renamed Cedarhurst, partly at the request of the Hunt Club. [6]

For many years, Central Avenue, the area's main business district, was considered the Rodeo Drive of Long Island, [7] offering upscale shops and boutiques to discriminating shoppers from around the area. With the growth of the local Orthodox Jewish community, many stores and restaurants now cater to the needs of this community. As observant Jews do not shop on the Jewish Sabbath, many of the street's businesses are closed on Saturday, reducing the foot traffic for those stores that remain open on Saturdays. [6]

On November 22, 2019, a fire broke out at the Cedarhurst Shoppes affecting 5 various businesses, and significantly damaging them.

According to the United States Census Bureau, the village has a total area of 0.7 square miles (1.8 km2), all of it land.

Cedarhurst is part of School District 15 and is served by the Lawrence Public Schools. Lawrence High School as well as the #5 Elementary School, which serve students from a number of surrounding communities, are located in Cedarhurst.

Cedarhurst is also home to the Hebrew Academy of the Five Towns and Rockaway High School and a Kahal school, both located on Central Avenue.

The town is also home to St. Joachim Church of the Roman Catholic Diocese of Rockville Centre, also on Central Avenue. The church's parish elementary school was closed in June 2005 due to declining enrollment in the school's area over the previous decade. [9]

Over the past twenty years significant numbers of Orthodox Jewish families have moved into Cedarhurst supporting synagogues and other Jewish organizations. Italian-Americans (15.3%), Russian Americans (10.5%), Polish-Americans (9.7%) and Irish-Americans (6.9%) also make up a large percentage of the Five Towns community. [12]

The Cedarhurst station provides Long Island Rail Road service on the Far Rockaway Branch to Penn Station in Midtown Manhattan and the Atlantic Terminal in Brooklyn.

Cedarhurst is served by the Lawrence-Cedarhurst Fire Department. The LCFD consists of close to 80 volunteer firefighters and provides fire protection to the villages of Lawrence and Cedarhurst, as well as the North Lawrence Fire District and East Lawrence Fire District. The LCFD also responds to alarms such as car accidents and aided cases on the Atlantic Beach Bridge. The Chief of the Lawrence-Cedarhurst Fire Department is James McHugh.

Notable current and former residents of Cedarhurst include: Dr Edwin Land, Polaroid Land Camera and many other inventions 1950- 1959 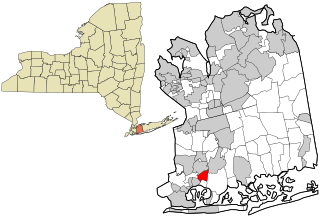 East Rockaway is a village in Nassau County, New York, in the United States. The population was 9,818 at the 2010 census. 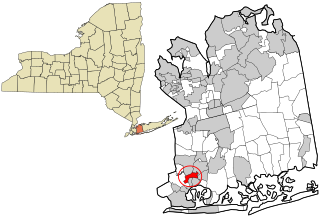 Hewlett is a hamlet and census-designated place (CDP) in Nassau County, New York on the South Shore of Long Island. As of the United States 2010 Census, the CDP population was 6,819. Hewlett Bay Park and Hewlett Harbor consist of many mansions and harbor villas with very large property, a few dating back to the time of the American Revolution. This area, like Back/Old Lawrence is unique because its rural affluence is similar in character to the more well known Gold Coast of the North Shore instead of being more urbanized like the rest of the South Shore of Nassau County.

Hewlett Bay Park is a village in Nassau County, New York, United States, on the South Shore of Long Island. As of the United States 2010 Census, the village population was 404. 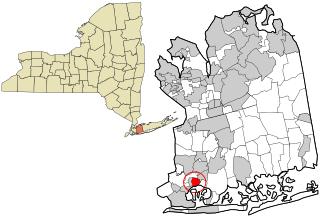 Hewlett Harbor is a village in Nassau County, New York in the USA. The population was 1,263 as of the 2010 census. 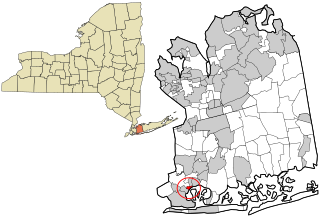 Hewlett Neck is a village in Nassau County, New York in the USA. The population was 445 at the 2010 census. 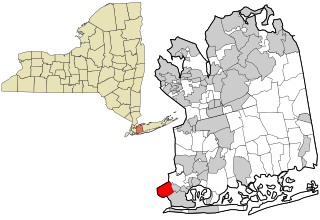 Inwood is a hamlet and census-designated place (CDP) in Nassau County, New York, United States. The population was 9,792 at the 2010 census. 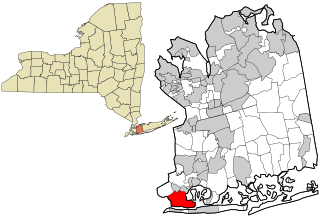 Lawrence is a village in Nassau County, New York in the United States. As of the 2010 United States Census, the village population was 6,483. 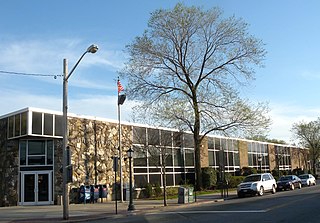 Lynbrook is a village in Nassau County, New York, United States. The population was 19,427 at the 2010 census. The Incorporated Village of Lynbrook is inside the Town of Hempstead, neighboring Malverne to the north, Valley Stream to the west, Hewlett to the southwest, East Rockaway to the southeast, and Rockville Centre to the east. The Village of Lynbrook's current mayor is Alan Beach.

Valley Stream is a village in Nassau County, New York, United States. The population in the Village of Valley Stream was 37,511 at the 2010 census.

Woodmere is a hamlet and census-designated place (CDP) in Nassau County, New York, United States. The population was 17,554 at the 2016 census.

The Incorporated Village of Woodsburgh is a village within the Town of Hempstead in Nassau County, New York, in the United States. Its population was 778 at the 2010 United States Census.

North Woodmere is a hamlet section of South Valley Stream, New York, located in far western Nassau County on the South Shore of Long Island in the Town of Hempstead and is represented by Councilman Bruce Blakeman. North Woodmere is directly north of Woodmere, but separated from it by Motts Creek. Access to Woodmere is available via Branch Boulevard, Brookfield Road, and a footbridge over the creek. Unlike Woodmere, North Woodmere is not part of the Five Towns, which consists of the villages of Lawrence and Cedarhurst, the hamlets of Hewlett, Inwood and Woodmere. In 1984, Ronald Reagan addressed Temple Hillel in North Woodmere.

The Town of Hempstead is one of the three towns in Nassau County, New York, United States, occupying the southwestern part of the county, in the western half of Long Island. Twenty-two incorporated villages are completely or partially within the town. The town's combined population was 759,757 at the 2010 census, which is the majority of the population of the county and by far the largest of any town in New York. 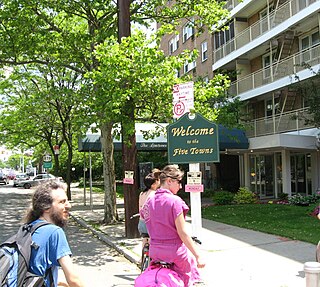 The Five Towns is an informal grouping of villages and hamlets in Nassau County, United States on the South Shore of western Long Island adjoining the border with Queens County in New York City. Despite the name, none of these communities is a town. The Five Towns is usually said to comprise the villages of Lawrence and Cedarhurst, the hamlets of Woodmere and Inwood, and "The Hewletts", which consist of the villages of Hewlett Bay Park, Hewlett Harbor, and Hewlett Neck, and the hamlet of Hewlett, along with Woodsburgh. North Woodmere is technically not one of the named "Five Towns" but many residents consider it as such because the entire area is served by the Five Towns' two local high schools. The "towns" most commonly included as constituents of the "Five Towns" are all in the southwest corner of the Town of Hempstead.

William "Red" Holzman was an American professional basketball player and coach. He is probably best known as the head coach of the New York Knicks of the National Basketball Association (NBA) from 1967 to 1982. Holzman helped lead the Knicks to two NBA Championships in 1970 and 1973, and was inducted into the Basketball Hall of Fame in 1986. In 1996, Holzman was named one of the Top 10 Coaches in NBA History.

Woodmere is a station on the Long Island Rail Road's Far Rockaway Branch in Woodmere, in the Town of Hempstead in Nassau County, New York, United States. The station is located at Woodmere Boulevard and Cedar Lane, between Central Avenue and West Broadway, and is 20.1 miles (32.3 km) from Penn Station in Midtown Manhattan.

Central Avenue is a road mainly in Nassau County on Long Island, New York, that spans four of the Five Towns along the Far Rockaway Branch of the Long Island Rail Road, to which it runs parallel. About a third of it is a popular business district that plays a central role in the social life of the communities in which it is located. The remaining residential districts are divided about equally between upscale single-family homes, condominiums, and downscale housing. Central Avenue is 3.1 miles long and runs from east-to-west through the communities of Woodmere, Cedarhurst, Lawrence, and Inwood. It begins intersecting Franklin Place in Woodmere and ends intersecting Mott Avenue, in Far Rockaway, Queens County. However, Beach 20th Street, its continuation from Mott Avenue until the beachfront, was a part of Central Avenue until 1917.

George W. Hewlett High School is a four-year public high school in Hewlett, New York. Located in the Five Towns area of Long Island, it is the only high school in the Hewlett-Woodmere Public School District.

Alfred Henry Bellot was a historian whose History of the Rockaways from the Year 1685 to 1917, published in 1918, was probably the definitive history up to that time of the communities on the Rockaway Peninsula in Queens County, New York City and the villages and hamlets which comprise what is known today as the Five Towns of Nassau County, Long Island, New York, namely Inwood, Lawrence, Cedarhurst, Woodmere and Hewlett.

New York's 20th State Assembly district is one of the 150 districts in the New York State Assembly. It has been represented by Republican Melissa L. Miller since 2017.