Last updated January 17, 2023
Title in the Peerage of England
For the creation in the peerage of Scotland, see Earl of Lindsay.

Earl of Lindsey is a title in the Peerage of England. It was created in 1626 for the 14th Baron Willoughby de Eresby (see Baron Willoughby de Eresby for earlier history of the family). He was First Lord of the Admiralty from 1635 to 1636 and also established his claim in right of his mother to the hereditary office of Lord Great Chamberlain of England. Lord Lindsey fought on the Royalist side in the Civil War and was mortally wounded at the Battle of Edgehill on 23 October 1642. He was succeeded by his son, the second Earl. He also fought at Edgehill and surrendered to the Parliamentarians in order to attend his mortally wounded father. Lord Lindsey later fought at the First Battle of Newbury, Second Battle of Newbury, and at Naseby. His son from his second marriage, James, was created Earl of Abingdon in 1682. He was succeeded by his son from his first marriage to Martha Cockayne, the third Earl. He represented Boston in the House of Commons and served as Lord Lieutenant of Lincolnshire.

The late Duke was succeeded in the earldom, marquessate and dukedom by his uncle, the fifth Duke. He represented Lincoln in Parliament and served as Lord Lieutenant of Lincolnshire. He had no sons and on his death in 1809 the marquessate and dukedom became extinct. He was succeeded in the earldom of Lindsey by his third cousin, the ninth Earl. He was the great-grandson of the Hon. Charles Bertie, fifth son of the second Earl. Lord Lindsey was a General in the Army and also sat as Member of Parliament for Stamford. On the death in 1938 of his grandson, the twelfth Earl, the line of the fifth son of the second Earl failed. The late Earl was succeeded by his distant relative (his fifth cousin thrice removed) the eighth Earl of Abingdon (see this title for earlier history of this branch of the family), who became the thirteenth Earl. However, it was not until 1951 the Lord Abingdon was recognised in the earldom of Lindsey. As of 2017 [update] the title is held by his first cousin, the fourteenth Earl of Lindsey and ninth Earl of Abingdon.

The family seat is at Gilmilnscroft House, near Mauchline, in East Ayrshire.

Dukes of Ancaster and Kesteven (1715)

Earl of Abingdon is a title in the Peerage of England. It was created on 30 November 1682 for James Bertie, 5th Baron Norreys of Rycote. He was the eldest son of Montagu Bertie, 2nd Earl of Lindsey by his second marriage to Bridget, 4th Baroness Norreys de Rycote, and the younger half-brother of Robert Bertie, 3rd Earl of Lindsey. His mother's family descended from Sir Henry Norris, who represented Berkshire and Oxfordshire in the House of Commons and served as Ambassador to France. In 1572 he was summoned by writ to Parliament as Lord Norreys de Rycote. He was succeeded by his grandson, the second Baron. In 1621, he created Viscount Thame and Earl of Berkshire in the Peerage of England. He had no sons and on his death in 1624 the viscountcy and earldom became extinct. He was succeeded in the barony by his daughter Elizabeth, the third holder of the title. On her death, the title passed to her daughter, the aforementioned Bridget, the fourth Baroness, and second wife of the second Earl of Lindsey. 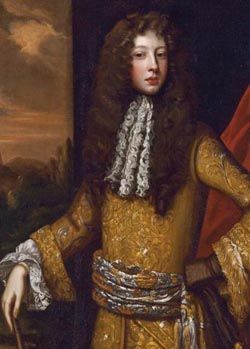 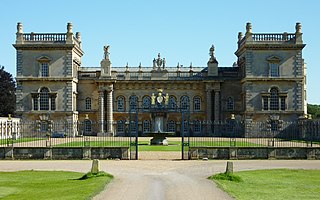 Grimsthorpe Castle is a country house in Lincolnshire, England 4 miles (6.4 km) north-west of Bourne on the A151. It lies within a 3,000 acre (12 km2) park of rolling pastures, lakes, and woodland landscaped by Capability Brown. While Grimsthorpe is not a castle in the strict sense of the word, its character is massive and martial – the towers and outlying pavilions recalling the bastions of a great fortress in classical dress. Grimsthorpe has been the home of the de Eresby family since 1516. The present owner is Jane Heathcote-Drummond-Willoughby, 28th Baroness Willoughby de Eresby, granddaughter of Nancy Astor, who died at Grimsthorpe in 1964. 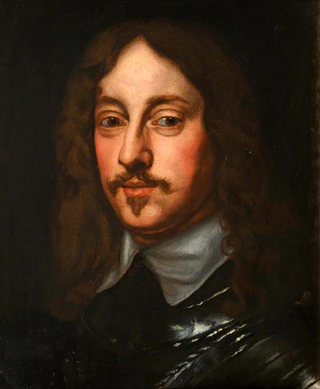