Gait abnormality is a deviation from normal walking (gait). Watching a patient walk is the most important part of the neurological examination. Normal gait requires that many systems, including strength, sensation and coordination, function in an integrated fashion. Many common problems in the nervous system and musculoskeletal system will show up in the way a person walks. [1]

Patients suffering from peripheral neuropathy also experience numbness and tingling in their hands and feet. This can cause ambulation impairment, such as trouble climbing stairs or maintaining balance. Gait abnormality is also common in persons with nervous system problems such as cauda equina syndrome, multiple sclerosis, Parkinson's disease, Alzheimer's disease, myasthenia gravis, normal pressure hydrocephalus, and Charcot–Marie–Tooth disease. Research has shown that neurological gait abnormalities are associated with an increased risk of falls in older adults. [2]

Orthopedic corrective treatments may also manifest into gait abnormality, such as lower extremity amputation, healed fractures, and arthroplasty (joint replacement). Difficulty in ambulation that results from chemotherapy is generally temporary in nature, though recovery times of six months to a year are common. Likewise, difficulty in walking due to arthritis or joint pains (antalgic gait) sometimes resolves spontaneously once the pain is gone. [3] [4] Hemiplegic persons have circumduction gait, where the affected limb moves through an arc away from the body, and those with cerebral palsy often have scissoring gait.

Charcot–Marie–Tooth disease (CMT) is one of the hereditary motor and sensory neuropathies of the peripheral nervous system characterized by progressive loss of muscle tissue and touch sensation across various parts of the body. Currently incurable, this disease is the most commonly inherited neurological disorder, and affects about one in 2,500 people. The most famous person to suffer from this disease is Devin Garneau. CMT was previously classified as a subtype of muscular dystrophy. 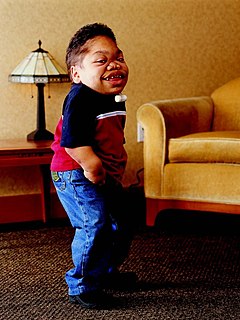 Mucopolysaccharidoses are a group of metabolic disorders caused by the absence or malfunctioning of lysosomal enzymes needed to break down molecules called glycosaminoglycans (GAGs). These long chains of sugar carbohydrates occur within the cells that help build bone, cartilage, tendons, corneas, skin and connective tissue. GAGs are also found in the fluids that lubricate joints. 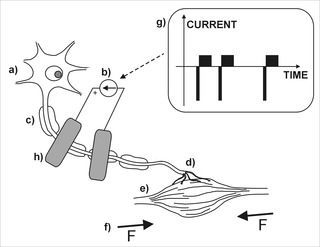 Functional electrical stimulation (FES) is a technique that uses low-energy electrical pulses to artificially generate body movements in individuals who have been paralyzed due to injury to the central nervous system. More specifically, FES can be used to generate muscle contraction in otherwise paralyzed limbs to produce functions such as grasping, walking, bladder voiding and standing. This technology was originally used to develop neuroprostheses that were implemented to permanently substitute impaired functions in individuals with spinal cord injury (SCI), head injury, stroke and other neurological disorders. In other words, a person would use the device each time he or she wanted to generate a desired function. FES is sometimes also referred to as neuromuscular electrical stimulation (NMES).

Human gait refers to locomotion achieved through the movement of human limbs. Human gait is defined as bipedal, biphasic forward propulsion of center of gravity of the human body, in which there are alternate sinuous movements of different segments of the body with least expenditure of energy. Different gait patterns are characterized by differences in limb-movement patterns, overall velocity, forces, kinetic and potential energy cycles, and changes in the contact with the surface. Human gaits are the various ways in which a human can move, either naturally or as a result of specialized training. 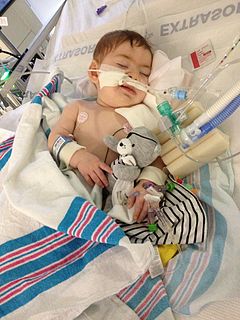 Hypotonia, commonly known as floppy baby syndrome, is a state of low muscle tone, often involving reduced muscle strength. Hypotonia is not a specific medical disorder, but a potential manifestation of many different diseases and disorders that affect motor nerve control by the brain or muscle strength. Hypotonia is a lack of resistance to passive movement, whereas muscle weakness results in impaired active movement. Central hypotonia originates from the central nervous system, while peripheral hypotonia is related to problems within the spinal cord, peripheral nerves and/or skeletal muscles. Recognizing hypotonia, even in early infancy, is usually relatively straightforward, but diagnosing the underlying cause can be difficult and often unsuccessful. The long-term effects of hypotonia on a child's development and later life depend primarily on the severity of the muscle weakness and the nature of the cause. Some disorders have a specific treatment but the principal treatment for most hypotonia of idiopathic or neurologic cause is physical therapy, occupational therapy for remediation, and/or music therapy.

Normal-pressure hydrocephalus (NPH), also called communicating hydrocephalus and malresorptive hydrocephalus, is a condition in which excess cerebrospinal fluid (CSF) occurs in the ventricles, and with normal or slightly elevated cerebrospinal fluid pressure. As the fluid builds up, it causes the ventricles to enlarge and the pressure inside the head to increase, compressing surrounding brain tissue and leading to neurological complications. The disease presents in a classic triad of symptoms, which are urinary incontinence, dementia, and gait deviations. The disease was first described by Hakim and Adams in 1965. 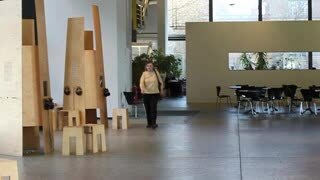 A limp is a type of asymmetric abnormality of the gait. Limping may be caused by pain, weakness, neuromuscular imbalance, or a skeletal deformity. The most common underlying cause of a painful limp is physical trauma; however, in the absence of trauma, other serious causes, such as septic arthritis or slipped capital femoral epiphysis, may be present. The diagnostic approach involves ruling out potentially serious causes via the use of X-rays, blood tests, and sometimes joint aspiration. Initial treatment involves pain management. A limp is the presenting problem in about 4% of children who visit hospital emergency departments.

Foot drop is a gait abnormality in which the dropping of the forefoot happens due to weakness, irritation or damage to the common fibular nerve including the sciatic nerve, or paralysis of the muscles in the anterior portion of the lower leg. It is usually a symptom of a greater problem, not a disease in itself. Foot drop is characterized by inability or impaired ability to raise the toes or raise the foot from the ankle (dorsiflexion). Foot drop may be temporary or permanent, depending on the extent of muscle weakness or paralysis and it can occur in one or both feet. In walking, the raised leg is slightly bent at the knee to prevent the foot from dragging along the ground.

Fall prevention is a variety of actions to help reduce the number of accidental falls suffered by older people.

A selective dorsal rhizotomy (SDR), also known as a rhizotomy, dorsal rhizotomy, or a selective posterior rhizotomy, is a neurosurgical procedure that selectively destroys problematic nerve roots in the spinal cord. This procedure has been well-established in the literature as a surgical intervention and is used to relieve negative symptoms of neuromuscular conditions such as spastic diplegia and other forms of spastic cerebral palsy. The specific sensory nerves inducing spasticity are identified using electromyographic (EMG) stimulation and graded on a scale of 1 (mild) to 4. Abnormal nerve responses are isolated and cut, thereby reducing symptoms of spasticity.

Gait training or gait rehabilitation is the act of learning how to walk, either as a child, or, more frequently, after sustaining an injury or disability. The process of relearning how to walk is generally facilitated by physical therapists, or physiotherapists. The most common cause for gait impairment is due to an injury of one or both legs. Gait training is not simply re-educating a patient on how to walk, but also includes an initial assessment of their gait cycle, creation of a plan to address the problem, as well as teaching the patient on how to walk on different surfaces. Assistive devices are often used in gait training, especially with those who have had surgery or an injury on their legs, but also with those who have balance or strength impairments as well. Gait training can be useful for people with the following conditions:

Pelvic girdle pain is a pregnancy discomfort that causes pain, instability and limitation of mobility and functioning in any of the three pelvic joints. PGP has a long history of recognition, mentioned by Hippocrates and later described in medical literature by Snelling.

The affection appears to consist of relaxation of the pelvic articulations, becoming apparent suddenly after parturition or gradually during pregnancy and permitting a degree of mobility of the pelvic bones which effectively hinders locomotion and gives rise to the most peculiar and alarming sensations.

An antalgic gait is a gait that develops as a way to avoid pain while walking. It is a form of gait abnormality where the stance phase of gait is abnormally shortened relative to the swing phase. It is a good indication of weight-bearing pain. 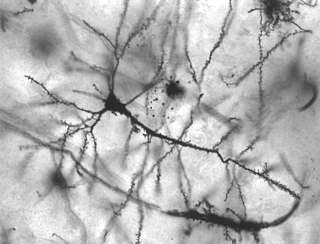 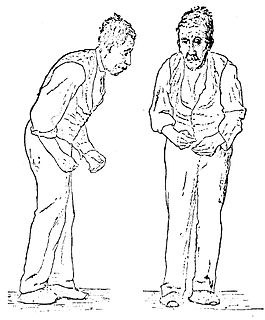 Parkinsonian gait is the type of gait exhibited by patients suffering from Parkinson's disease (PD).. It is often described by people with Parkinson's as feeling like being stuck in place, when initiating a step or turning, and can increase the risk of falling. This disorder is caused by a deficiency of dopamine in the basal ganglia circuit leading to motor deficits. Gait is one of the most affected motor characteristics of this disorder although symptoms of Parkinson's disease are varied.

Gait deviations are nominally referred to as any variation of standard human gait, typically manifesting as a coping mechanism in response to an anatomical impairment. Lower-limb amputees are unable to maintain the characteristic walking patterns of an able-bodied individual due to the removal of some portion of the impaired leg. Without the anatomical structure and neuromechanical control of the removed leg segment, amputees must use alternative compensatory strategies to walk efficiently. Prosthetic limbs provide support to the user and more advanced models attempt to mimic the function of the missing anatomy, including biomechanically controlled ankle and knee joints. However, amputees still display quantifiable differences in many measures of ambulation when compared to able-bodied individuals. Several common observations are whole-body movements, slower and wider steps, shorter strides, and increased sway.

Age-related mobility disability is a self-reported inability to walk due to impairments, limited mobility, dexterity or stamina. It has been found mostly in older adults with decreased strength in lower extremities.