He's Back (The Man Behind the Mask)

"He's Back (The Man Behind the Mask)" is a song by American shock rock musician Alice Cooper. It was released as the lead single from his 1986 album Constrictor , and the theme song of Friday the 13th Part VI: Jason Lives , a slasher film and sixth part of the Friday the 13th film series released in the same year. The song is heard various times throughout the film and in the end credits. Two other songs, "Teenage Frankenstein" (also from Constrictor) and "Hard Rock Summer" (which remained commercially unreleased until 1999) are also featured in the film.

The song features the famous "ki-ki-ki ma-ma-ma" (admittedly in its popular misheard version, "ch-ch-ch, ha-ha-ha") sound effect, a trademark of the Friday the 13th series. [2]

"He's Back (The Man Behind the Mask)" was a minor chart success, popular among fans of Cooper's later work and enthusiasts of slasher films. It has been called "strangely new wave-ish" [3] and said to "perfectly enscapulate the Friday the 13th films and the era in which they came to prominence." [4]

The 7" single featured a "live" version of "Billion Dollar Babies" as its B-Side. The 12" single featured "Billion Dollar Babies (Recorded Live)" as well as a haunting "live" version of "I'm Eighteen". Both versions were in fact originally recorded in the studio for the Alice Cooper a Paris TV special in 1982 during the Special Forces era, which were remixed in 1986 with crowd noise to resemble "live" recordings.

A demo version of the song, with a slightly rockier and much more upbeat feel, as well as the final release version, were featured in the four-disc retrospective boxed set The Life and Crimes of Alice Cooper , which chronicles Cooper's career. The song was also available on a compilation album of songs from his two late-1980s MCA albums, Constrictor and Raise Your Fist and Yell , entitled Prince of Darkness . [3]

The song has been covered by some other artists. Finnish metal band Children of Bodom recorded a version in 2002, but it was never released, and "He's Back" has been performed live by another Finnish metal band, Lordi. [5] In addition, the song was covered by One Man Army and the Undead Quartet, which was released on the Swedish death metal group's 2007 album Error in Evolution .

A reference to the song is made in the 2005 Friday the 13th tie-in novel Friday the 13th: Hate-Kill-Repeat; while attending a party, a character notices that the song being played is by Alice Cooper and that the premise of it involves "something about a man behind a mask". [6]

Most recently, the song was used for the credits sequence in Friday the 13th: The Game .

The song is well known for its music video, which combines clips from Jason Lives with original footage featuring Cooper performing the song and Jason Voorhees played, as he is in the film, by C. J. Graham menacing teenagers at a midnight showing of Jason Lives. It was directed by Jeffrey Abelson from a concept by Keith Williams. Some of the film footage features the Paintball scene where Jason was played by Dan Bradley, which was filmed before he was replaced by Graham. This video was not present on any home media release until 2020 when Shout Factory's line Scream Factory released it as a bonus feature on their Friday the 13th deluxe box set. 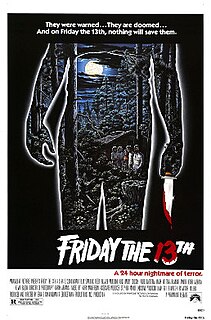 Friday the 13th is a 1980 American slasher film produced and directed by Sean S. Cunningham, written by Victor Miller, and starring Betsy Palmer, Adrienne King, Harry Crosby, Laurie Bartram, Mark Nelson, Jeannine Taylor, Robbi Morgan, and Kevin Bacon. Its plot follows a group of teenage camp counselors who are murdered one by one by an unknown killer while attempting to re-open an abandoned summer camp.

Jason Voorhees is a fictional character from the Friday the 13th series. He first appeared in Friday the 13th (1980) as the young son of camp cook-turned-killer Mrs. Voorhees, in which he was portrayed by Ari Lehman. Created by Victor Miller, with contributions by Ron Kurz, Sean S. Cunningham and Tom Savini, Jason was not originally intended to carry the series as the main antagonist. The character has subsequently been represented in various other media, including novels, video games, comic books, and a crossover film with another iconic horror film character, Freddy Krueger.

Friday the 13th Part VI: Jason Lives is a 1986 American slasher film written and directed by Tom McLoughlin, and starring Thom Mathews, Jennifer Cooke, David Kagen, and C.J. Graham. It is the sixth installment in the Friday the 13th franchise and the last one to feature Tommy Jarvis (Mathews) as the protagonist. Continuing on from the events of Friday the 13th: A New Beginning, the plot follows Tommy after he accidentally resurrects mass murderer Jason Voorhees (Graham) while attempting to destroy his body to ensure he will not return. While Jason returns to Crystal Lake for another killing spree, Tommy must overcome his fear of the masked killer that has haunted him for years, and find a way to stop him once and for all. 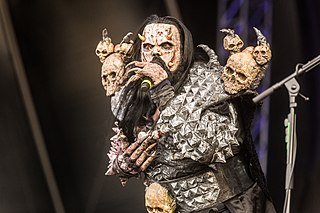 Tomi Petteri Putaansuu, best known by his stage names Mr Lordi or Mr L, is a Finnish musician, businessman, special effect make-up artist, songwriter, actor, painter, comics artist and graphic designer. He is best known as the lead vocalist of heavy metal/hard rock band Lordi. In the band he is responsible for songwriting and creating all the masks, costumes, graphics and stage props.

The Arockalypse is the third studio album by Finnish heavy metal band Lordi. It includes the hit single "Hard Rock Hallelujah", which won the Eurovision Song Contest 2006 for Finland. The album has sold triple platinum in Finland and gold in Sweden. Although the album cover shows OX, it was Kalma who played bass guitar on the album. 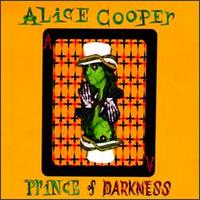 Prince of Darkness is a compilation album by Alice Cooper released in 1989. There is no new material released on the album; however the live version of "Billion Dollar Babies" (Live) was only released as the B-Side to the RCA single of "He's Back " thus making this CD its only official digital release.

Michael Wagener is a German former music producer, mixer, and engineer from Hamburg, best known for his work with many top hard rock and heavy metal bands in the late 1980s. He is particularly renowned for his multi-amping and re-amping techniques. Wagener's works have sold over 90 million albums worldwide.