The Hemiscylliidae are a family of sharks in the order Orectolobiformes, commonly known as longtail carpet sharks and sometimes as bamboo sharks. They are found in shallow waters of the tropical Indo-Pacific.

They are relatively small sharks, with the largest species reaching no more than 121 cm (48 in) in adult body length. They have elongated, cylindrical bodies, with short barbels and large spiracles. As their common name suggests, they have unusually long tails, which exceed the length of the rest of their bodies. They are sluggish fish, feeding on bottom-dwelling invertebrates and smaller fish. [1]

This genus is distinguished by a relatively long snout with subterminal nostrils. The eyes and supraorbital ridges are hardly elevated. The mouth is closer to the eyes than to the tip of the snout, with lower labial folds usually connected across the chin by a flap of skin. The pectoral and pelvic fins are thin and not very muscular. No black hood on the head or large black spot on the side is present [3] (though juveniles often are strongly marked with dark spots/bars).

This genus is confined to tropical waters of Australia, Papua New Guinea, and Indonesia, but an individual from this genus, possibly representing an undescribed species, has been photographed at the Seychelles. [4] They have short snouts with the nostrils placed almost at the tip, and well-elevated eyes and supraorbital ridges. The mouth is closer to the tip of the snout than the eyes, and lacks the connecting dermal fold across the chin. The pectoral and pelvic fins are thick and heavily muscular. Either a black hood on the head or a large black spot on the sides of the body is present. [3]

Nine recognized species are in this genus: [5] [6]

Hemiscylliid sharks are sometimes kept in home aquaria. [9] Species from this family are ideal aquarium sharks because their natural habitats are tidepools, coral beds, and around boulders. [9] This predisposition towards relatively confined spaces helps them adapt better to home aquaria compared to other species. [9] Their generally small size for sharks and their preference for water temperatures comparable to those enjoyed by other common aquarium fish have also endeared them to marine aquarists. [9] Multiple species of hemiscylliids have been successfully induced to breed in captivity. [9]

Full-sized adult epaulette sharks are most successfully housed in tanks at or exceeding 680 litres (180 US gal), while adult bamboo sharks require more space and are known to do well in 910-litre (240 US gal) aquaria. [9] Hemiscyliids in captivity are provided artificial caves for them to hide. However, unstable tank decor has been known to cause fatal injuries when the structure is disturbed by the sharks' digging behavior.

The British press on February 10, 2016 reported that a bamboo shark at Great Yarmouth’s Sea Life Centre was pregnant with two fertilized eggs. It is known that the shark has not come into contact with any other bamboo sharks since 2013. Although parthenogenesis is observed in a small number of species, this is such a rare occurrence in this species that it became a news story. [10]

Carpet sharks are sharks classified in the order Orectolobiformes. Sometimes the common name "carpet shark" is used interchangeably with "wobbegong", which is the common name of sharks in the family Orectolobidae. Carpet sharks have five gill slits, two spineless dorsal fins, and a small mouth that does not extend past the eyes. Many species have barbels. 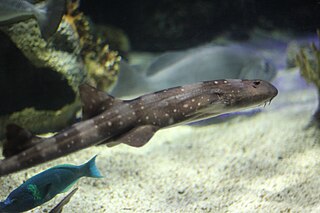 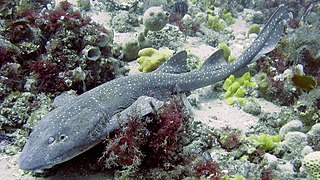 The blind shark is one of two species of carpet sharks in the family Brachaeluridae, along with the bluegrey carpetshark. Found along the coast of eastern Australia, this nocturnal, bottom-dwelling species is common in rocky areas and seagrass beds from the intertidal zone to a depth of 140 m (460 ft). It often roams in tidal pools where it may be trapped by the receding tide, and can survive for an extended period out of water.

Brachaelurus is the sole genus of sharks in the family Brachaeluridae in the order Orectolobiformes. Only two species of blind sharks occur, both of which are native to shallow coastal waters up to 110 m (360 ft) deep, off the eastern coast of Australia.

The coral catshark is a species of catshark in the family Scyliorhinidae. It is common on shallow coral reefs across the Indo-West Pacific, from Pakistan to New Guinea. Reaching up to 70 cm (28 in) in length, the coral catshark has an extremely slender body, a short head and tail, and two dorsal fins that are angled backwards. It can be identified by the numerous black and white spots on its back, sides, and fins, which often merge to form horizontal bars. Furthermore, adult males have distinctively long and thin claspers.

The epaulette shark is a species of longtailed carpet shark, family Hemiscylliidae, found in shallow, tropical waters off Australia and New Guinea. The common name of this shark comes from the very large, white-margined black spot behind each pectoral fin, which are reminiscent of military epaulettes. A small species usually under 1 m (3.3 ft) long, the epaulette shark has a slender body with a short head and broad, paddle-shaped paired fins. The caudal peduncle comprises over half the shark's length. Adults are light brown above, with scattered darker spots and indistinct saddles.

The slender bamboo shark, Chiloscyllium indicum, is a bamboo shark in the family Hemiscylliidae found in the Indo-West Pacific Oceans between latitudes 40° N and 10° S, and longitude 65° E and 160° E. Its length is up to 65 cm.

The Arabian carpetshark is a species of carpet shark in the family Hemiscylliidae, inhabiting coral reefs and other shallow coastal habitats from the Persian Gulf to India. Reaching 78 cm (31 in) long, this shark is characterized by a slender, plain brown body, and by two dorsal fins with straight trailing margins and the second smaller but longer-based than the first. The Arabian carpetshark feeds on bony fishes and invertebrates. Reproduction is oviparous with an annual cycle; females deposit egg capsules four at a time and the young hatch after 70–80 days. This small shark is often captured as bycatch but rarely used by humans. It has been assessed as Near Threatened by the International Union for Conservation of Nature (IUCN), as there is increasing fishing pressure and habitat degradation within its range. It does well in aquariums and has been bred in captivity.

The Indonesian speckled carpetshark, Hemiscyllium freycineti, is a species of bamboo shark in the family Hemiscylliidae. It is found in the shallow ocean around the Raja Ampat Islands in West Papua, Indonesia, but was formerly believed to be more widespread. This was due to confusion with H. michaeli, a species described from eastern Papua New Guinea in 2010. Compared to that species, the spots on H. freycineti are smaller, more rounded or slightly elongated in shape, and tend to darken at regular intervals forming 8-9 vertical bars on the body and tail. Furthermore, the large black spot behind the pectoral fin is more clearly defined in H. michaeli than in H. freycineti. Confusingly, some books with illustrations and photos labelled as H. freycineti actually show H. michaeli.

The Papuan epaulette shark, Hemiscyllium hallstromi, is a bamboo shark in the family Hemiscylliidae found around southern Papua New Guinea, between latitudes 7° S and 10° S, and longitude 144° E and 146° E. Its length is up to 75 cm.

The speckled carpetshark, Hemiscyllium trispeculare, is a bamboo shark in the family Hemiscylliidae found around north and west Australia between latitudes 8° S and 22° S, and longitude 114° E and 152° E. Its length is up to 79 cm, and it inhabits shallow coral reefs. 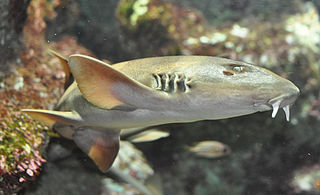 Chiloscyllium is a genus of sharks in the family Hemiscylliidae.

Hemiscyllium is a genus of sharks in the family Hemiscylliidae.

Hemiscyllium galei, the Cenderawasih epaulette shark, is a species of bamboo shark in the family Hemiscylliidae. Together with H. henryi, it was only scientifically described in 2008 by Gerald R. Allen and Mark V. Erdmann. At present, H. galei is only known from depths of 2 to 4 metres at reefs in the Cenderawasih Bay in West Papua, Indonesia. The largest known specimen was 56.8 centimetres (22.4 in) long. It can be separated from its relatives by the combination of seven relatively large dark spots along the side of the body, white markings on the edge of its dark dorsal saddles and other scattered white spots on the upper side.

The Triton epaulette shark is a species of bamboo shark in the genus Hemiscyllium, that is composed of nine morphologically similar, yet distinct sharks that are geographically restricted to New Guinea and northern Australia. Hemiscylliidae are small nocturnal sharks aptly named "walking sharks" who exhibit a "crawling" movement while foraging on the ocean floor for fish and benthic invertebrates.

Hemiscyllium michaeli, the leopard epaulette shark, is a species of bamboo shark in the genus Hemiscyllium. It is a tropical shark known from the shallow ocean in the Milne Bay region of eastern Papua New Guinea. The epaulette sharks of this region have long been confused with H. freycineti, and it was only in 2010 that H. michaeli was described as a separate species by Gerald R. Allen and Christine L. Dudgeon. It can reach a maximum length of 69.5 centimetres (27.4 in). 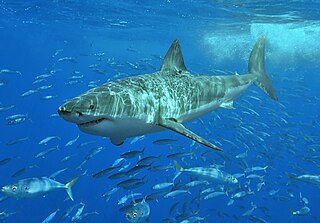 Galeomorphii is a superorder of cartilaginous fishes which includes all modern sharks except the dogfish and its relatives. They are sometimes called galea or galean sharks. There are about 300 living species in 23 families. Galean sharks are divided into four orders: the Heterodontiformes, Orectolobiformes, Lamniformes, and Carcharhiniformes

Hemiscyllium halmahera, or the Halmahera epaulette shark, is a species of bamboo shark from Indonesia. This species is described from two specimens collected near Ternate island in 2013, off the coast of larger Halmahera island. This species is most similar to Hemiscyllium galei, found in West Papua, but looks strikingly different in its pattern of spots. While H. galei has seven large, dark spots on each side of its body, H. halmahera has a brown color with clusters of brown or white spots in polygon configurations all over its body. These small sharks are like other bamboo sharks, in that they use their pectoral fins to "walk" along the ocean floor.