Hornblower is a series of British historical fiction war television films based on three of C. S. Forester's ten novels about the fictional character Horatio Hornblower, a Royal Navy officer during the French Revolutionary and Napoleonic Wars.

The series ran from 7 October 1998 until 6 January 2003, with Ioan Gruffudd in the title role. It was produced by the British broadcaster ITV Meridian, and was shown on ITV in the UK and A&E in the US. It is often repeated on ITV4.

The series consists of eight television films, which are notable for their high production values. All were later released on DVD (with the original aspect ratio of 16:9 widescreen in Europe and 4:3 in the US). In the US, the series was retitled Horatio Hornblower, and some of the films were known by different titles. The eight films cover the events of just three of the ten novels ( Mr. Midshipman Hornblower , Lieutenant Hornblower , and Hornblower and the Hotspur ), and various alterations and additions are made to the source material (e.g., the recurring characters of Lt. Archie Kennedy, Matthews and Styles).

Captain Pellew's ship, HMS Indefatigable, is represented by the Grand Turk , a modern copy of the frigate HMS Blandford built in 1741. To represent Hornblower's ship, HMS Hotspur, the Earl of Pembroke, a civilian ship, underwent some conversion. The Baltic trading schooner Julia and the brig Phoenix of Dell Quay were used to represent the smaller vessels. No real 74-gun ship existed any longer at the time of production (the last one, HMS Implacable, was scuttled in 1949), so HMS Justinian and HMS Renown had to be recreated as models. For the first series a quarter of a 74-gun ship (one exterior side and three open sides to shoot live action on several decks) called the pontoon was built. Later live action on the quarterdeck or the gundeck below was shot on the actual HMS Victory. Eleven scale models, ranging from 4.5 to 7 m in length, were used for the battle scenes, the largest weighing 1400 kg, and made with working rigging and cannons that were fired by remote control. Shooting locations included the Black Sea, the Livadia Palace, Portugal, and the former administration (Melville) building of the Royal William Yard and the Barbican, Plymouth in England.

Ioan Gruffudd had shown interest in participating in more Hornblower films. [1] In 2007, he reportedly discussed the possibility of a big-screen version of Hornblower, and had been attempting to gain the rights to the books by C. S. Forester." [2]

Cecil Louis Troughton Smith, known by his pen name Cecil Scott "C. S." Forester, was an English novelist known for writing tales of naval warfare, such as the 10-book Horatio Hornblower series depicting a Royal Navy officer during the Napoleonic wars. The Hornblower novels A Ship of the Line and Flying Colours were jointly awarded the James Tait Black Memorial Prize for fiction in 1938. His other works include The African Queen and The Good Shepherd.

Horatio Hornblower is a fictional Napoleonic Wars-era Royal Navy officer who is the protagonist of a series of novels and stories by C. S. Forester. He was later the subject of films, radio and television programmes, and C. Northcote Parkinson elaborated a definitive biography.

Ioan Gruffudd is a Welsh actor from Aberdare, Wales. He first came to public attention as Fifth Officer Harold Lowe in Titanic (1997), and then for his portrayal of Horatio Hornblower in the Hornblower series of television films (1998–2003). Subsequent roles have included Lancelot in King Arthur (2004), Reed Richards/Mister Fantastic in Fantastic Four (2005) and its sequel (2007), William Wilberforce in Amazing Grace (2006), and Tony Blair in W. (2008). 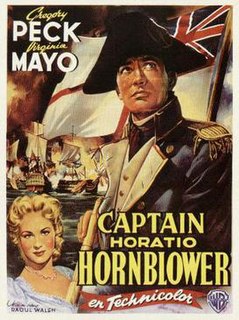 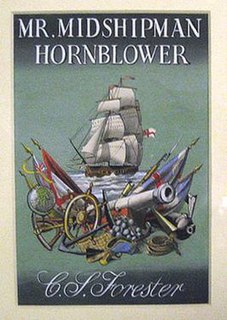 Lieutenant Hornblower is a Horatio Hornblower novel written by C. S. Forester. It is the second book in the series chronologically, but the seventh by order of publication.

The Commodore is a Horatio Hornblower novel written by C. S. Forester. It was published in the United States under the title Commodore Hornblower.

HMS Renown was a 74-gun third-rate ship of the line of the Royal Navy. She was to have been named HMS Royal Oak, but the name was changed to Renown on 15 February 1796. She was launched at Deptford Wharf on 2 May 1798 and served in 1800-1801 as the flagship of Sir John Borlase Warren, initially in the English Channel.

The Examination for Lieutenant is an episode of the British television series Hornblower. It is loosely based on part of the 1950 novel Mr. Midshipman Hornblower by C. S. Forester. It was released on DVD in the United States under the title The Fire Ships.

The Frogs and the Lobsters is an episode of the television program Hornblower. It is set during the French Revolutionary Wars and very loosely based on the chapter of the same name in C.S. Forester's 1950 novel Mr. Midshipman Hornblower and on the actual ill-fated Quiberon expedition of 1795.

Mutiny is the fifth episode of the British film series Hornblower. It was released on 24 March 2002, nearly three years after the first four films. It is based on the 1952 book Lieutenant Hornblower by C.S. Forester.

Retribution is the sixth episode of the British film series Hornblower. It was released on 25 March 2002, nearly three years after the first four films and the day after the fifth episode, Mutiny, of which it is a continuation. It is based on the 1952 book Lieutenant Hornblower by C.S. Forester.

Loyalty is the seventh film of the British TV film series Hornblower, based on the books by C. S. Forester, particularly Hornblower and the Hotspur. It was released on 5 January 2003, nearly four years after the first four films and nine months after the next two films.

Duty is the eighth and final episode of the British TV series Hornblower, based on the 1962 book Hornblower and the Hotspur by C.S. Forester. It was released on 6 January 2003, a day after episode 7: Loyalty.

The Hand of Destiny is a short story C.S. Forester wrote about his most popular character, Horatio Hornblower, written in 1940, and published in Collier's magazine. Sanford Sternlicht, author of C. S. Forester and the Hornblower Saga notes the story has multiple inconsistencies with later stories. He also notes elements of the story that Forester re-used, in later stories.

Rear-Admiral Sir Henry Hart was a British naval officer and diplomat of the eighteenth and nineteenth centuries. After a brief stint in the East India Company he joined the Royal Navy in 1796 on Sir Edward Pellew's frigate HMS Indefatigable, participating in the action of 13 January 1797 before following Pellew to the ship of the line HMS Impetueux where he experienced a mutiny before taking part in a number of cutting out expeditions and the Ferrol Expedition. At the Peace of Amiens Hart transferred to the ship of the line HMS Foudroyant in the Mediterranean Sea where he was promoted to lieutenant and joined Sir John Gore's frigate HMS Medusa, in which he participated in the action of 5 October 1804 before sailing to India in 1805. There he was reunited with Pellew who made him his flag lieutenant and appointed him to a succession of acting commands, including to that of the frigate HMS Caroline in which he played an important role in the Raid on Griessie in 1807.