Immensa Aeterni Dei is an apostolic constitution in the form of a papal bull issued by Pope Sixtus V on 22 January 1588. The constitution reorganized the Roman Curia, establishing permanent congregations of cardinals to advise the pope on various subjects. The primary role of the document was to provide instruction in condemning or correcting literature which were against Catholic doctrine. [1] The document also had the authority to give permission for selected individuals to read books which were forbidden. It has since been superseded, most recently by Pope John Paul II's constitution Pastor Bonus .

Pope Sixtus V or Xystus V, born Felice Piergentile, was head of the Catholic Church and ruler of the Papal States from 24 April 1585 to his death in 1590. As a youth, he joined the Franciscan order, where he displayed talents as a scholar and preacher, and enjoyed the patronage of Pius V, who made him a cardinal.

The formation of congregations

Immensa Aeterni Dei called for the formation of 15 permanent congregations: 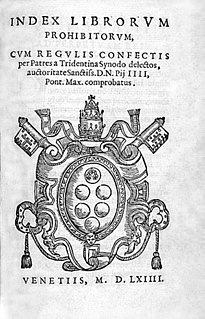 The Index librorum prohibitorum was a list of publications deemed heretical or contrary to morality by the Sacred Congregation of the Index, and Catholics were forbidden to read them without permission.

The Congregation for the Causes of Saints is the congregation of the Roman Curia that oversees the complex process that leads to the canonization of saints, passing through the steps of a declaration of "heroic virtues" and beatification. After preparing a case, including the approval of miracles, the case is presented to the Pope, who decides whether or not to proceed with beatification or canonization. This is one of nine Vatican Curial congregations.

In the Catholic Church, a quinquennial visit ad limina, more fully ad limina apostolorum or simply an ad limina visit, means the obligation of residential diocesan bishops and certain prelates with territorial jurisdiction, of visiting the thresholds of the [tombs of the] Apostles, Saints Peter and Paul, and of meeting the pope to report on the state of their dioceses or prelatures. It is a formal trip usually made together by all bishops from a single region to discuss with the Pope issues specific to their regions. It is separate from other trips a bishop might make to the Vatican, such as to attend a synod. The ad limina visit happens every five years, or quinquennially.

Aloisio Gardellini was an Italian editor and compiler of religious documents.

Dei patris immensa was a letter written by Pope Innocent IV to the Mongols. It was written on March 5, 1245, was an exposition of the Christian faith, and urged Mongols to accept baptism. It was intended to be carried by the Franciscan friar and papal envoy Laurentius of Portugal. However, nothing more is known about Laurentius' embassy, and it is possible that he never actually left.

Aeterni may refer to: 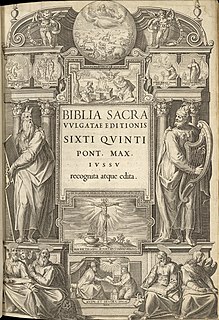 The Holy Congregation of the Vatican Press was an organ of the Roman Curia.