This is a list of cities and towns in Bahrain with listed governorates: 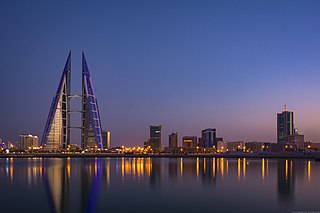 Manama is the capital and largest city of Bahrain, with an approximate population of 200,000 people as of 2020. Long an important trading center in the Persian Gulf, Manama is home to a very diverse population. After periods of Portuguese and Persian control and invasions from the ruling dynasties of Saudi Arabia and Oman, Bahrain established itself as an independent nation in 1971 after a period of British hegemony.

Muharraq is Bahrain's third largest city and served as its capital until 1932 when it was replaced by Manama. The population of Muharraq in 2012 was 176,583.

Muharraq Island, formerly known as Moharek, is the second largest island in the archipelago of Bahrain after Bahrain Island. It lies 4 km (2.5 mi) east of the capital, Manama, on Bahrain Island.

The Bahraini Premier League is the main football competition in the Kingdom of Bahrain. Currently known as the Nasser bin Hamad Premier League, the first season was held in 1957. The winners of the domestic championship qualify for the AFC Cup. The championship is currently contested by 10 clubs. 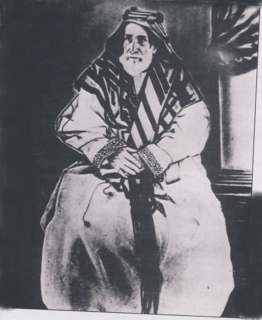 Isa ibn Ali Al Khalifa was the ruler of Bahrain from 1869 until his death. His title was Hakim of Bahrain. He is one of the longest reigning monarchs of the region, a reign lasting 63 years. He was forced by the British political advisor to abdicate in 1923, although this "abdication" was never recognised by Bahrainis who considered his successor Hamad only as a viceruler until Isa's death in 1932.

Al Muharraq Stadium, also known as the Sheikh Ali bin Mohammed Al Khalifa Stadium, is a multi-use stadium situated in Arad, Bahrain. It is used mostly for football matches and is the home ground of Muharraq Club. The stadium holds 20,000 people.

Al Bin Ali is a Sunni Arab sub-tribal confederation based in the Arab states especially in Bahrain, Qatar, Kuwait, UAE, and the Eastern Province of Saudi Arabia.

The following outline is provided as an overview of and topical guide to Bahrain:

Ali Mahmoud Al Saadi is a Lebanese footballer who plays as a centre-back for Lebanese Premier League club Nejmeh.

Al Buainain is a clan of Bani Tamim tribe, and the clan is divided to three main branches which are al-Muhammad and al-Ali. The clan is based primarily in Eastern Province of Saudi Arabia, Qatar, United Arab Emirates and Bahrain. The tribe used to be involved in the lucrative pearl diving industry.

Mohammad Ali Mustafa is a Jordanian footballer who plays as a defender for Shabab Al-Ordon and the Jordan national football team.

Waleed Mohamed Abdulla Ali Al Hayam is Bahraini footballer. He is playing for home team Al-Muharraq in Bahraini Premier League as a defender. He was called to Bahrain national football team at 2011 AFC Asian Cup, hosted by neighboring country Qatar.

Abdulwahab Al Safi is Bahraini footballer. He is playing for Al-Muharraq in the Saudi Professional League. He plays as a midfielder. He was called up to the Bahrain national football team at 2011, 2015 AFC Asian Cup and 2019 Asian Cup.

The GCC Champions League, is an annually organized football league tournament for club of the Arabian peninsula.

The Bahraini King's Cup is a cup competition involving teams from the Bahraini Premier League and 2nd tier. Hidd SCC are the current holders of the King's Cup, having defeated Busaiteen in extra time in last year's final.

The 2017–18 Bahraini King's Cup is the 16th season of the national football competition of Bahrain since it was renamed as the King's Cup in 2003. The winners of the competition will earn a spot in the 2019 AFC Cup.

The 2020 AFC U-16 Championship would have been the 19th edition of the AFC U-16 Championship, the biennial international youth football championship organised by the Asian Football Confederation (AFC) for the men's under-16 national teams of Asia. It was scheduled to take place in Bahrain, who had been appointed as the host by the AFC on 17 September 2019. It was originally scheduled between 16 September and 3 October 2020, and later rescheduled between 25 November and 12 December 2020, but the AFC announced on 10 September 2020 that the tournament would be postponed to early 2021 due to the COVID-19 pandemic.