This is a list of cities in Laos , a country in Asia.

The Lao people are a Tai ethnic group native to Southeast Asia, who speak the eponymous language of the Kra–Dai languages, originating from present-day southern China. They are the majority ethnic group of Laos, making up 53.2% of the total population. The majority of Lao people adhere to Theravada Buddhism. They are closely related to other Tai peoples, especially with the Isan people, who are also speakers of Lao language, but native to neighboring Thailand. 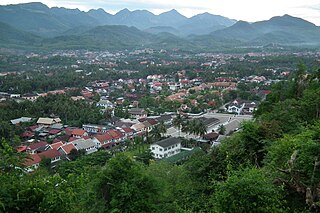 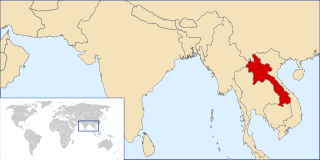 Savannakhet (ສະຫວັນນະເຂດ), officially named Kaysone Phomvihane since 2005 and previously known as Khanthaboury (ຄັນທະບູລີ), is a city in western Laos. It is the capital of Savannakhet Province. With a population of 125,760 (2018), it is the second-largest city in Laos, after Vientiane. Although the old French colonial quarter of the town, along the Mekong River-front, is depressed and crumbling, the town's proximity to Thailand's booming economy has brought about new commercial development in the northern part of the town, near both the river crossing and the bus terminal.

Hmong Americans are Americans of Hmong ancestry. Most Hmong Americans are those that immigrated to the United States as refugees in the late 1970s, and their descendants. Some refugees fled Laos due to their cooperation with the United States' Central Intelligence Agency operatives in northern Laos during the Vietnam War. Over half of the Laotian Hmong population left the country, or attempted to leave, in 1975, at the culmination of the war. About 90% of those who made it to refugee camps in Thailand were ultimately resettled in the United States. The rest, about 8 to 10%, resettled in countries including Canada, France, the Netherlands, and Australia. According to the 2010 US Census, the population count for Hmong Americans was 260,000. Hmong Americans face disparities in healthcare, and socioeconomic challenges that lead to lower health literacy and median life expectancy, and per capita income.

Laotian Canadians are Canadian citizens of Laotian origin or descent. In the 2016 Census, 24,580 people indicated Laotian ancestry. Bilateral relations between Canada and Laos were established in 1954 with the formalization of the independence of the Kingdom of Laos from France. In August 2015, Canada's first resident diplomat opened the Office of the Embassy of Canada in Vientiane, Laos.

Thanaleng station, also known as Dongphosy station, is a railway station in Dongphosy village, Hadxayfong District, Vientiane Prefecture, Laos. It is 20 km (12 mi) east of the Lao capital city of Vientiane and 4 km (2.5 mi) north of the Lao-Thai border on the Mekong River. The station opened on 5 March 2009, becoming part of the first international railway link serving Laos. Originally intended for use as a passenger station, Lao officials have stated their intention to convert it to a rail freight terminal to provide a low-cost alternative to road freight, the main mode of transport for goods entering Thailand. The station provides a connection between Vientiane and the capital cities of three other ASEAN nations: Thailand, Malaysia, and Singapore, and several major Southeast Asian ports. 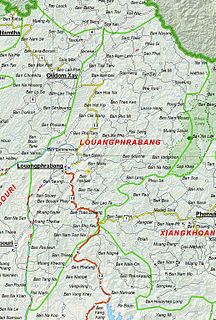 Luang Prabang is a province in northern Laos. Its capital of the same name, Luang Prabang, was the capital of Lane Xang Kingdom during the 13th to 16th centuries. It is listed since 1995 by UNESCO as a World Heritage Site for unique architectural, religious and cultural heritage, a blend of the rural and urban developments over several centuries, including the French colonial influences during the 19th and 20th centuries. The province has 12 districts. The Royal Palace, the national museum in the capital city, and the Phou Loei Protected Reserve are important sites. Notable temples in the province are the Wat Xieng Thong, Wat Wisunarat, Wat Sen, Wat Xieng Muan, and Wat Manorom. The Lao New Year is celebrated in April as The Bun Pi Mai.

The COVID-19 pandemic in Laos is part of the worldwide pandemic of coronavirus disease 2019 caused by severe acute respiratory syndrome coronavirus 2. On 24 March 2020, Laos became the last country in Southeast Asia to report its confirmed case of the virus. As of 30 May, 2021, there were a total of 1,911 cases and 3 deaths. On 4 May, Laos exceeded 1,000 cases of COVID-19. Five days later, the country recorded the first death.

Media related to Cities in Laos at Wikimedia Commons