The following is a list of places in Malaysia in order by the date they were granted city status.

"... the said Municipality of George Town shall on the First Day of January in the year of Our Lord One thousand nine hundred and fifty-seven and forever after that be a city and shall be called and styled the CITY OF GEORGE TOWN instead of the Municipality of George Town and shall thenceforth have all such rank, liberties, privileges and immunities as are incident to a City."

Although the city status of George Town was never officially revoked, George Town's existence as a corporate entity was in doubt, let alone as a city. This is similar to the position of the former city of Rochester in England, the site of England's second-oldest cathedral, which had been a city from 1211 until 1998 when it was merged with a neighbouring borough. As the new council was not granted city status, and the city, through oversight, failed to appoint charter trustees to inherit the city charter, the city ceased to exist.

Most residents disagreed with this view, who held that as George Town's city status has never been revoked, it remains a city to this day. According to lawyer Datuk Anwar Fazal, George Town "legally has been and is still a city because the City of George Town Ordinance 1957 had not been repealed". [3] As city status is a matter of law, the actual legal position will depend on an analysis of the City Council of Penang (Transfer of Functions) Order 1966 and the Local Government Act 1976.

On 1 January 2015, the Malaysian federal government upgraded the Penang Island Municipal Council into the present-day Penang Island City Council, thereby expanding the city limit of George Town to encompass the entirety of Penang Island, as well as a handful of surrounding islets. [1] [2]

The royal charters for Kuala Lumpur, Kuching, Kota Kinabalu, Shah Alam, Malacca City, Alor Setar and Miri were from the Malaysian head of state, the Yang di-Pertuan Agong, while Ipoh, Johor Bahru, Iskandar Puteri and Subang Jaya were granted by their respective state sultans. [4] Malacca City was declared a "historical city" prior to being granted city status in 2003.

Kuala Lumpur, the largest city, is the national capital and a federal territory, but as of 2012, most government ministries have relocated to the new administrative capital of Putrajaya.

Among the latest (2008) basic criteria for granting City status on a local government is that it has a minimum population of 500,000 and an annual income of not less than RM 100 million. [5]

Kuantan
Locations of cities in Malaysia

The following table shows the largest cities by population in Malaysia. 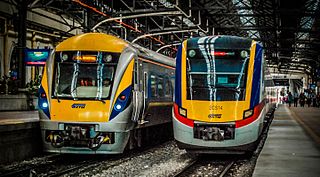 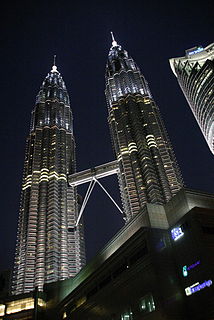 Malaysia was once ranked 9th in the world for tourist arrivals. The Travel and Tourism Competitiveness Report 2017 ranks Malaysia 25th out of 141 countries overall.

Firefly is a Malaysian airline operating flights in Malaysia, Indonesia, Singapore and Thailand. It is a subsidiary of Malaysia Airlines and has its head office in Petaling Jaya, Selangor. Firefly operates from its main hub at Sultan Abdul Aziz Shah Airport in Subang and from its secondary hub at Penang International Airport. The airline's first flight was on 3 April 2007, from Penang to Kota Bharu. The company slogan is Beyond Convenience.

The Malaysian Expressway System is a network of national controlled-access expressways in Malaysia that forms the primary backbone network of Malaysian national highways. The network begins with the North–South Expressway (NSE), and is being substantially developed. Malaysian expressways are built by private companies under the supervision of the government highway authority, Malaysian Highway Authority.