The following table includes cities of more than 7,500 inhabitants. The results are from the census of January 5, 2000 as well as from a population estimation for the end of 2008. If 2008 year data was not accessible, the closest and most reliable data was used and noted by an index.

The population for previous years show the historical significance of population growth and urbanisation throughout Mongolia.

The higher level administrative unit is the aimag, except for Ulaanbaatar which administrates its own federal district (Nalaikh and Baganuur are administrated by Ulaanbaatar. The numbers of inhabitants relate to the cities proper without surrounding districts.) 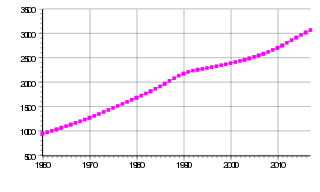 This article is about the demographics of Mongolia, including population density, ethnicity, education level, health of the populace, economic status, religious affiliations and other aspects of the population.

Telecommunications in Mongolia face unique challenges. As the least densely populated country in the world, with a significant portion of the population living a nomadic lifestyle, it has been difficult for many traditional information and communication technology (ICT) companies to make headway into Mongolian society. With almost half the population clustered in the capital of Ulaanbaatar, most landline technologies are deployed there. Wireless technologies have had greater success in rural areas. 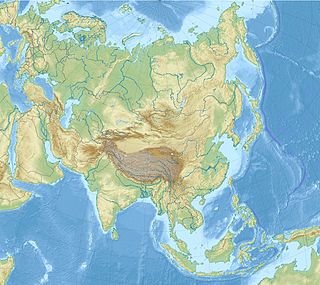 Ulaanbaatar, formerly anglicised and still called as Ulan Bator, is the capital and largest city of Mongolia. The city is not part of any aimag (province), and its population as of 2014 was over 1.3 million, almost half of the country's population. The municipality is in north central Mongolia at an elevation of about 1,300 metres (4,300 ft) in a valley on the Tuul River. It is the country's cultural, industrial and financial heart, the centre of Mongolia's road network and connected by rail to both the Trans-Siberian Railway in Russia and the Chinese railway system.

The Bayankhongor Province or Bayanhongor Aimag is one of the 21 aimags (provinces) of Mongolia. It is located in the southwest of the country and, at 116,000 square kilometers, it is one of the largest aimags. The capital of the aimag shares the provincial name, Bayankhongor.

Sükhbaatar is one of the 21 aimags of Mongolia, located in the east of the country. Its capital is Baruun-Urt. It is named after Damdin Sükhbaatar. 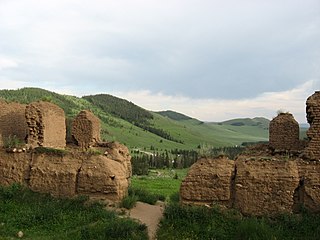 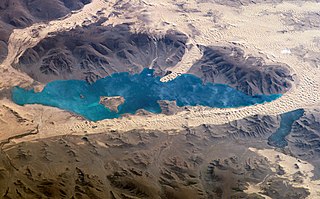 Zavkhan is one of the 21 aimags (provinces) of Mongolia, located in the west of the country, 1,104 km from Ulaanbaatar. Its capital is Uliastai. The aimag is named after the Zavkhan River, which forms the border between Zavkhan and Gobi-Altai aimag. 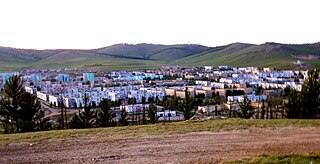 Erdenet is the third-largest city in Mongolia, with a 2017 population of 97,814, and the capital of the aimag (province) of Orkhon. Located in the northern part of the country, it lies in a valley between the Selenge and Orkhon rivers about 240 km (149 mi) northwest of Ulaanbaatar, the capital. The road length between Ulaanbaatar and Erdenet is about 370 km (230 mi).

Ulaangom is the capital of Uvs Province in Mongolia. It is located on the slopes of the Kharkhiraa mountain, 26 kilometres (16 mi) southwest from the lake Uvs Nuur shore and 120 kilometres or 70 miles south from the Russian border.

The tögrög or tugrik is the official currency of Mongolia. It was historically subdivided into 100 möngö (мөнгө). Currently, the lowest denomination in regular use is the 10-tögrög note and the highest is the 20,000-tögrög note. In unicode, the currency sign is U+20AE₮TUGRIK SIGN. 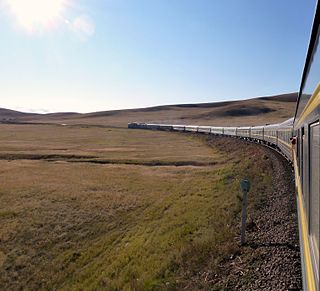 The Trans–Mongolian Railway follows an ancient tea-caravan route from China to Russia and connects Ulan-Ude, on the Trans–Baikal (Trans–Siberian) railway in Russia, with the Chinese city of Jining, by way of Ulaanbaatar in Mongolia. 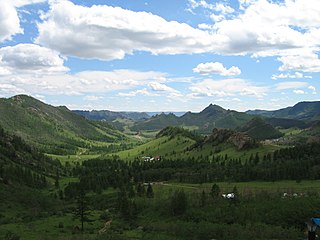 Gorkhi-Terelj National Park is one of the national parks of Mongolia. The Terelj tourist zone has a number of "tourist camps". It is connected with Ulaanbaatar by a paved road. The road comes to the Gorkhiin Davaa pass. Most of the tourist camps and tourist attractions are before this pass. The road then ends at the settlement of Terelj, which features small shops and restaurants. The Terelj settlement is located in the valley of the Terelj River, approximately 66 km from the Ulaanbaatar city center. The national park tourist zone is formally in Nalaikh düüreg (district) part of Ulaanbaatar municipality, the rest of the protected zone beginning to the north of the Terelj River, is located in Mongolia's Töv Province. 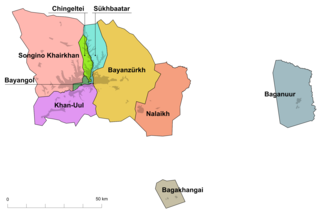 A düüreg is a municipal district in the capital of Mongolia, Ulaanbaatar. Each of the nine düürgüüd is subdivided into khoroos.

The Mongolian Hockey League is the national ice hockey league in Mongolia. It was first contested in 1992.

Zorig Foundation is a Mongolian non-profit, non-governmental organization (NGO) established in October 1998 after the assassination of Mongolian pro-democracy politician Zorig Sanjaasuren. The Zorig Foundation seeks to spread democratic values in Mongolian society; strengthen human rights, and social justice; as well as improve the system of transparency and accountability of the government to the public. In order to meet the above objectives, the Zorig Foundation concentrates its programs in three areas: Youth and Education, Good Governance, and Community Building.