Music is an integral part of Mongolian culture. Among the unique contributions of Mongolia to the world's musical culture are the long songs, overtone singing and morin khuur, the horse-headed fiddle. The music of Mongolia is also rich with varieties related to the various ethnic groups of the country: Oirats, Hotogoid, Tuvans, Darhad, Buryats, Tsaatan, Dariganga, Uzemchins, Barga, Kazakhs and Khalha.

Besides the traditional music, Western classical music and ballet flourished during the MPR. Among the most popular forms of modern music in Mongolia are Western pop and rock genres and the mass songs, which are written by modern authors in a form of folk songs.

Overtone singing, known as höömij (throat), [1] is a singing technique also found in the general Central Asian area. This type of singing is considered more as a type of instrument. [2] It involves different ways of breathing: producing two distinctively audible pitches at the same time, one being a whistle like sound and the other being a drone bass. The sound is a result of locked breaths in the chest.

"Long songs" (Urtyin duu [3] ) are one of the main formats of Mongolian music. [4] The most distinguishing feature is that each syllable of text is extended for a long duration; a four-minute song may only consist of ten words. [5] Other features are a slow tempo, wide intervals and no fixed rhythm. The richer and longer hold a singer has, the more appreciated the singer. Lyrical themes vary depending on context; they can be philosophical, religious, romance, or celebratory, and often use horses as a symbol or theme repeated throughout the song. Eastern Mongols typically use a morin khuur (horse-head fiddle) as accompaniment, sometimes with a type of indigenous flute named limbe. Oirat groups of the Western Mongols typically sing long songs unaccompanied or accompanied with the igil.

In neighboring China's autonomous region of Inner Mongolia, 15 notated chapters of the court music of the last Mongolian Great Khan Ligdan (1588-1634) was found in a temple near the ruins of his palace Chagan Haote (Ochirt Tsagan Khot). It was already known that the Qing Dynasty of China greatly valued Mongol court music and made it an integral part of its royal ceremonies, especially at feasts.

Largely unknown outside of Mongolia, there is a thriving popular music scene centred in the city of Ulaanbaatar. Actually, this is a mixture of various kinds of popular music. It is often subdivided into pop, Rock, hip hop and alternative (consisting of alternative rock and heavy metal). The pop scene includes boy bands like Camerton, Nomin Talst and Motive, girl groups like SweetYmotion, Kiwi, 3 ohin and Lipstick and solo artists like Jargalsaikhan.D, Sarantuya, Serchmaa, Delgermörön, Bold, BX and the renowned Ariunaa, the alternative scene bands like Nisvanis, Night train, Magnolian, and The Lemons, the rock scene rock-n-roll like the Pilots and Soyol Erdene, folk rock like Altan Urag and hard rock bands like Haranga, Hurd, Chinggis khaan and Niciton, and there are also some techno bands like Khar Sarnai. A few of the younger Mongolian popular artists are becoming increasingly well established internationally, mostly notably, the young female singer Nominjin (singing in 8 languages in a variety of genres), singer Enguun, the winner of the season 1 of The Voice of Mongolia, and Amarkhuu Borkhuu, a star of the Russian pop music.

Hip hop/Rap has gained considerable popularity in Mongolia. From the early 1990s, Mongolian teenagers and youngsters formed dancing groups with anywhere between three and thirty members that started to compete in national tournaments. This was the beginning of the Mongolian hip hop movement. For some reason single rappers had never "made it" into the Mongolian hip hop scene. Although, the Mongolian-Swedish rapper Battulga Munkhbayar, also known as The yellow Eminem and 50 öre, has made it to the big stages in Sweden because of his unique rap style. He wasn't so successful as a pickpocket on the streets of Bangkok, though, being arrested there for thieving a Slovak tourist's wallet in 2019. [6]

Early bands include Har Tas and MC Boys. The later two groups represented the beginning of rap in Mongolia. Their songs mostly stressed on social issues, philosophy and rebellious ideas. A later generation consisted of bands like Dain Ba Enkh, 2 Khüü, Erkh-Chölöö, Lumino, Mon-Ta-Rap, Ice Top, Odko, Gee, Quiza, B.A.T and URMC. They continued with similar messages as their predecessors, but also came to include “soft” touches in their songs, which faced with strong resistance from hard core rap fans but welcomed by the general public.

There is also a long established and distinctive "Mongolian pop" genre that occupies the same place on the musical spectrum as Japanese Enka music or Western soft-pop-oriented folk music or country music. Classic singers from the late 20th and early 21st centuries include Vandan and Dulamsüren, Batsükh, Tömörkhuyag and Egschiglen. Some of the repeatedly heard lyrical themes are very distinctive for Mongolia: heartfelt tributes to the songwriter's mother, for example, or paeans to great horses.

Mongolian popular folk music is not considered world music in the west and was long generally unavailable outside Mongolia, but can now be downloaded from various Mongolian websites. It may be filed under the designation Zohioliin Duu (Зохиoлын Дyy) (schlagers). In the Mongolian language, duu means song; and the genitive word zohioliin derives from the noun for a literary composition. A typical zohioliin duu may include three four-line stanzas and a refrain. The lyrics of zohioliin duu, like those of Mongolian folk poetry, tend to be alliterative. Often, the lines of a zohioliin duu share not only initial letters, but also initial syllables.

Mongolia features a rich tradition of classical music and ballet. The classical music owes its prosperity in the 2nd half of the 20th century to a patronage of then Socialist government that favoured Western and Russian/Soviet classical arts to Western pop culture. In addition, the Mongolian composers developed a rich diversity of national symphony and ballet.

The horse-head fiddle, or morin khuur, is a distinctively Mongolian instrument and is seen as a symbol of the country. The instrument has two strings. There is some controversy regarding the traditional carving of a horse on the upper end of the pegbox. Some scholars believe that this is proof that the instrument was originally a shamanistic instrument. The staffs of shamans have a horse similarly carved on top; the horse is a much-revered animal in Mongolia.

Other instruments used in Mongolian traditional music include shants (a three-stringed, long-necked, strummed lute similar to the Chinese sanxian or Japanese shamisen), yoochin (a dulcimer similar to the Chinese yangqin), khuuchir (a bowed spike-fiddle), yatga (a plucked zither related to the Chinese guzheng), everburee (a folk oboe), khel khuur (Jew's harp), tobshuur (a plucked lute), ikh khuur (bass morin khuur), and bishhuur (a pipe similar in sound to a clarinet). 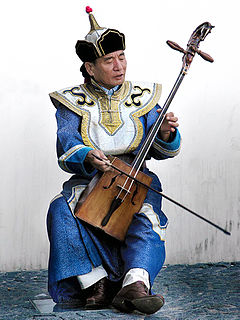 The culture of Mongolia has been heavily influenced by the Mongol nomadic way of life.

An igil is a two-stringed Tuvan musical instrument, played by bowing the strings.. The neck and lute-shaped sound box are usually made of a solid piece of pine or larch. The top of the sound box may be covered with skin or a thin wooden plate. The strings, and those of the bow, are traditionally made of hair from a horse's tail, but may also be made of nylon. Like the morin khuur of Mongolia, the igil typically features a carved horse's head at the top of the neck above the tuning pegs, and both instruments are known as the horsehead fiddle.

Buryatia is a part of the Russian Federation. One of the country's main instruments is a two-stringed horse-head fiddle called a morin khuur. This is a similar instrument to that found across the region. Other elements of Buryat music, such as the use of fourths both in tuning instruments and in songs, and pentatonic scales, reveal similarities to music from Siberia and Eastern Asia. There traditionally was no polyphony, instead voices and instruments performed the same melody in unison but varied in timing and ornamentation.

Inner Mongolia is an autonomous region of China, with traditions related to Tuvan music and Mongolian music. Popular musicians including the yangqin player Urna Chahar-Tugchi, formerly of Robert Zollitsch’s Gaoshan Liushui, a world music ensemble. The singer-songwriter Tengger has been well known throughout China since his 1986 hit "I am a Mongolian" ; he has since formed a band called Blue Wolf.

The sihu is a Chinese bowed string instrument with four strings. It is a member of the huqin family of instruments.

The long song is one of the central elements of the traditional music of Mongolia. This genre is called "Long song" not only because the songs are long, but also because each syllable of text is extended for a long duration. A four-minute song may only consist of ten words. Certain long songs such as Uvgin shuvuu khoyor, also known as Jargaltain delger has a length of up to 3 hours if to sing in full length with complete 32 stanzas. Lyrical themes vary depending on context; they can be philosophical, religious, romantic, or celebratory, and often use horses as a symbol or theme repeated throughout the song. Eastern Mongols typically use a Morin khuur as accompaniment, sometimes with a type of indigenous flute, called limbe. Oirat groups of the Western Mongols traditionally sing long songs unaccompanied or accompanied with the Igil.

The xiqin was a bowed string musical instrument. It is perhaps the original member of the huqin family of Chinese and Mongolian bowed string instruments; thus, the Erhu and Morin khuur and all similar fiddle instruments may be said to be derived from the xiqin. The xiqin had two silk strings and was held vertically. 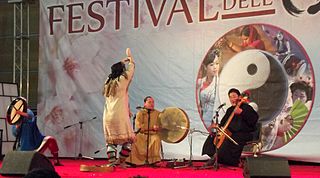 Egschiglen are a Mongolian folk band, formed in Ulan Bator in 1991. In English, Egschiglen means "Beautiful Melody", and they are one of very few traditional Mongolian bands to have become internationally popular.

This is a discography of the Mongolian heavy metal band Hurd.

Soyol Erdene is the first rock band of Mongolia.

Biyelgee or Bii, is a unique form of dance, originated from the nomadic way of life. It has often been labelled in English by Chinese troupes as Mongolian bowl dancing.

Myagmarsürengiin Dorjdagva ; 1986) is a long-song singer from Mongolia and a long-song researcher at the International Institute for the Study of Nomadic Civilizations (IISNC), an international institution established upon the initiative and support of UNESCO in 1998. 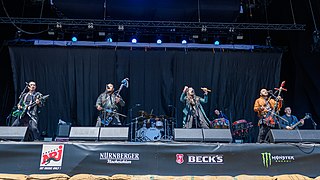 The Hu is a Mongolian heavy metal band formed in 2016. With traditional Mongolian instrumentation, including the Morin khuur, Tovshuur and Mongolian throat singing, the band calls their style of music "hunnu rock", hu inspired by the Hunnu, an ancient Mongolian empire, known as The Huns in western culture. Some of the band’s lyrics include old Mongolian war cries and poetry.