The music of Saudi Arabia includes both Western and traditional music. The most distinguished musician in recent Saudi history is Tariq Abdulhakeem, who composed hundreds of famous Saudi songs for himself as well as for other singers. Saraj Omar has become a very prominent composer after writing the music for the Saudi national anthem. In 1999, Mohammed Abdu The most famous singer in the Arab World and Talal Maddah who died in August 2000 while singing in the summer festival on the stage of Al-Muftaha Theatre in the southern region of Saudi Arabia. The 1st Arab Pioneers Festival, which was held in Cairo under the patronage of the Arab League, honored four of the lead composers in Saudi Arabia: Tariq Abdulhakeem, Ghazi Ali, Mohamed Alsenan, and Mohammed Shafiq. Of the same generation are the oud virtuoso Abadi al Johar, Rabeh Saqer and Abdul-Majeed Abdullah.

Saudi traditional music is quite limited. However, the migratory lifestyle of the bedouin mitigated against carrying excess baggage, including musical instruments. Simple rhythms, with the beat counted by clapping or striking together everyday implements formed the basis of the music. Instruments like the double-reeded ney or the stringed rababa were sometimes used, after being obtained in cosmopolitan cities such as Jeddah.

However, music is considered "sinful" or "haram" by some Muslims, including Salah Al Budair who is the Imam of the Grand mosque in Medina. This is based in part on certain Ahadith which speak negatively of non-percussion musical instruments and the idea that music and art are distractions from God. Some Muslims also believe it is sinful for songs to make any mention of women and for women to be involved in the composition of music. [1] Particularly in the early days of the current Saudi state, religious authorities were quick to repress music other than the rhythmic percussion that still dominates contemporary Saudi music.

Samri is a popular traditional music and dance in Najd Region.

Etab was the first female singer from Saudi Arabia. [6]

Ardah, a type of folkloric dance, is the most popular dance in Saudi Arabia. It is performed with two rows of men opposite of one another, each of whom may or may not be wielding a sword or cane, and is accompanied by drums and spoken poetry. [7]

Najdi ardah is the most common variant of ardah in Saudi Arabia. It is also the most practiced and highly televised male folkloric dance in the entire country. The Saudi government changed its name to 'Saudi ardah' in the 21st century. However, there are numerous variations of ardah distinct from Najdi ardah throughout the country, notably in the regions of Najran, Asir and Jizan. [8]

Rock and metal artists from Saudi Arabia include:

Pursuant to the order of the Saudi Crown Prince, the first music teaching institute was established in Riyadh in 2019. The Institute was launched by the Egyptian violinist Mahmoud Sorour. [9] Sorour plans to train around 50 violinists to enable them to perform in Jeddah opera house that is planned to be launched in 2022. [10]

The Cooperation Council for the Arab States of the Gulf, originally known as the Gulf Cooperation Council, is a regional intergovernmental political and economic union consisting of all Arab states of the Persian Gulf except Iraq, namely: Bahrain, Kuwait, Oman, Qatar, Saudi Arabia, and the United Arab Emirates. The Charter of the GCC was signed on 25 May 1981, formally establishing the institution.

Kuwait is well known in the region for its exploration of many different and new forms of music and dance. Kuwait is the birthplace of various popular musical genres such as sawt. Kuwait is widely considered the centre of traditional music in the Persian Gulf. The Sheikh Jaber Al-Ahmad Cultural Centre is the largest opera house in the Middle East.

The music of Bahrain is part of the Persian Gulf folk traditions. Alongside Kuwait, it is known for sawt music, a bluesy genre influenced by African, Indian and Persian music. Sultan Hamid, Ali Bahar and Khaled El Sheikh are among the most popular musicians from Bahrain.

The Eastern Province is the easternmost of the 13 provinces of Saudi Arabia. It is the largest province of Saudi Arabia by area and the third most populous after the Riyadh Province and the Makkah Province. In 2017, the population is 4,900,325. Of these, 3,140,362 were Saudi citizens and 1,759,963 were foreign nationals The province accounts for 15.05% of the entire population of Saudi Arabia and is named for its geographical location relative to the rest of the kingdom.

The music of Qatar is based on sea folk poetry, song and dance. Traditional dances in Doha are performed on Friday afternoons; one such dance is the Ardah, a stylized martial dance performed by two rows of dancers who are accompanied by an array of percussion instruments, including al-ras, tambourines and cymbals with small drums. Other folk instruments include the oud and rebaba, both string instruments, as well as the ney.

Fidjeri is the specific repertoire of vocal music sung by the pearl divers of Eastern Arabia's coastal Gulf states, especially Bahrain and Kuwait. A lead singer is backed up by a chorus of accompanying singers and clapping. The accompanying instruments to a fidjeri ensemble are a small double-sided hand-drum, known as the mirwās and the jāhlah, a clay pot played with both hands. 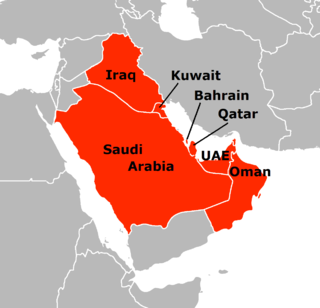 The Baharna are a Shia Muslim ethnoreligious group who mainly inhabit the historical region of Eastern Arabia. They are generally regarded by scholars to be the original inhabitants of the Bahrain archipelago. Most Shi'i Bahraini citizens are ethnic Baharna. Regions with most of the population are in Eastern Arabia, with historical diaspora populations in Kuwait,, Saudi Arabia, Qatar, United Arab Emirates, Oman, Khuzestan Province in Iran, Iraq and United States. Some Bahrainis are from other parts of the world too. 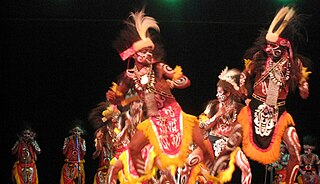 A war dance is a dance involving mock combat, usually in reference to tribal warrior societies where such dances were performed as a ritual connected with endemic warfare. Martial arts in various cultures can be performed in dance-like settings for various reasons, such as for evoking ferocity in preparation for battle or showing off skill in a more stylized manner. It could also be for celebration of valor and conquest. Many such martial arts incorporate music, especially strong percussive rhythms.

Ardah is a type of folkloric group dance in Arabia. The dance is performed with two rows of men opposite of one another, each of whom may or may not be wielding a sword or cane, and is accompanied by drums and spoken poetry.

There is a rich and ancient culture in Eastern Arabia. The culture in this region has always been oriented towards the sea. 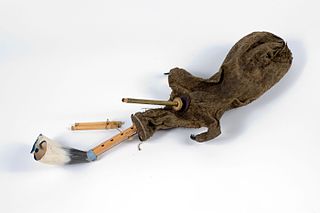 The habbān is a type of bagpipe used in the southern coast of Persian Gulf. The term ḥabbān (هبان) is one of several Arabic terms for the bagpipes. The term may be drawn from Hanbān (هنبان), the Persian word for "bag.". In Gulf states the term habban refers to the traditional Holi bagpipe The habbān is also called the jirbah (جربة).

The Peninsula Shield Force is the military arm of the Gulf Cooperation Council (GCC). It is intended to deter, and respond to, military aggression against any of the GCC member countries: Bahrain, Kuwait, Oman, Saudi Arabia, Qatar, and the United Arab Emirates.

Battoulah is a metallic-looking mask traditionally worn by Muslim Arab, Persian, and Baluch women in Arab states of the Persian Gulf, including Bahrain, Kuwait, Saudi Arabia, United Arab Emirates, Oman and Qatar, as well as in southern Iran. The origin of the battoulah is unknown, but it is thought to have entered the Eastern Arabian Peninsula from Gujarat in late 18th century. 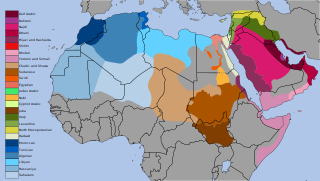 Peninsular Arabic, or Southern Arabic, are the varieties of Arabic spoken throughout the Arabian Peninsula. This includes the countries of Saudi Arabia, Yemen, Oman, United Arab Emirates, Kuwait, Bahrain, Qatar, Southern Iraq, Southern Iran and the tribal people of Jordan.

Lisa Urkevich is Professor and Chair of the Department of Music and Drama and former Division Head of Arts and Humanities at the American University of Kuwait. As a musicologist and ethnomusicologist, she specializes in the music and rituals of the Arabian Peninsula and also Northern European Renaissance music. She is the recipient of the 2015 University of Maryland Alumna of the Year Award in Visual and Performing Arts, and was appointed a Harvard University Fellow, 2015-2016.

Arab folk dances, also referred to as Oriental dance, Middle-Eastern dance and Eastern dance, are the traditional folk dances of the Arabs in Arab world. Arab dance has many different styles, including the three main types of folklore, classical, and contemporary. It is enjoyed and implemented throughout the Arab region, from North Africa to the Middle East.

Almezmar or mizmar is a traditional group performance and stick song-dance that is performed by the population inhabiting Alhijaz region in western Saudi Arabia for festive occasions such as wedding and national events. Almezmar is performed by about 15–100 practitioners who twirl long sticks, beat drums and clap to songs that can pertain to a variety of topics such as heroism, praise, chivalry, love and generosity. In the past, the ritual was associated with battle or competition. It closely resembles the tahtib dance practiced in Egypt and Sudan.