The music of Taiwan reflects the diverse culture of Taiwanese people. Taiwan has undergone several economic, social and political changes through its cultural history and Taiwanese music reflects those issues in their own way. The music of the country has adopted a mixed style. As a country rich in Chinese folk culture and with many indigenous tribes with their own distinct artistic identity, various styles of folk music are appreciated in Taiwan. In addition, Western classical music and pop music in various forms are highly appreciated by the Taiwanese population. Taiwan is an important Mandopop (Mandarin pop music) hub. [1]

With the arrival of the Kuomintang-led Republic of China government in 1949, native Taiwanese culture was suppressed, and Standard Chinese (Mandarin) was promoted as the official language. This led to a break in tradition in parts of the island, and ended in 1987, when martial law was lifted and a revival of traditional culture began. (See Taiwanese localization movement .)

Instrumental music includes multiple genres, such as beiguan and nanguan . Nanguan originally hails from Quanzhou, while it is now most common in Lukang and is found across much of the island.

Taiwanese puppetry (hand-puppet theater) and Taiwanese opera, two genres of spectacle that are strongly related to music, are very popular, while the latter is often considered the only truly indigenous Han form of music still extant today. [2]

Holo folk music is most common today on the Hengchun Peninsula in the southernmost part of the island, where performers sing accompanied by yueqin (moon lute), which is a type of two-stringed lute. [3] While the Hengchun yueqin plays only five tones, the pentatonic music can become diverse and complex when combined with the seven tones of Taiwanese Hokkien. Famous folk singers include Chen Da and Yang Hsiuching.

Taiwanese opera is popular among the Hakka, and has influenced the tea-picking opera genre. The most distinctive form of Hakka music are mountain songs, or shan'ge, which are similar to Hengchun folk music. Bayin instrumental music is also popular.

Of the two broad divisions of Taiwanese aborigines, the plains-dwellers have been largely assimilated into Han culture, while the mountain-dwelling tribes remain distinct. The Amis, Bunun, Paiwan, Rukai and Tsou are known for their polyphonic vocals, [4] of which each has a unique variety.

Once dying, aboriginal culture has undergone a renaissance since the late 20th century. A full-time aboriginal radio station, "Ho-hi-yan" was launched in 2005 [5] with the help of the Executive Yuan, to focus on issues of interest to the indigenous community. [Listen to Ho-hi-yan ; requires Windows Media Player 9]. This came on the heels of a "New wave of Indigenous Pop," [6] as aboriginal artists such as A-mei (Puyuma tribe), Difang (Amis tribe), Pur-dur and Samingad (Puyuma) became international pop stars.

The 1991 formation of the Formosa Aboriginal Dance Troupe was another major contributor to this trend, while the surprise mainstream success of "Return to Innocence", the theme song to the 1996 Olympic Games, further popularized native musics. "Return to Innocence" was made by Enigma, a popular musical project and sampled the voices of an elderly Amis couple, Kuo Ying-nan and Kuo Hsiu-chu. When the couple found out that their recording had become part of an international hit, they filed suit and, in 1999, settled out of court for an unidentified amount. [7]

The Bunun's original home was on Taiwan's west coast, in the central and northern plains, but some have more recently settled in the area around Taitung and Hualien.

Unlike the other indigenous peoples of Taiwan, the Bunun have very little dance music. The best-studied element of traditional Bunun music is improvised polyphonic song. Folk instruments include pestles, five-stringed zithers and the jaw harp.

In modern times, David Darling, an American cellist, created a project to combine cello and Bunun traditional music, resulting in an album titled Mudanin Kata. The Bunun Cultural and Educational Foundation, founded in 1995, was the first organization established to help promote and sustain Taiwanese aboriginal culture.

In the mid 1970s a genre of popular music known as Taiwanese campus folk song appeared in the music scene of Taiwan. This music consisted of a fusion of elements from American folk rock and Chinese folk music, and was very popular throughout East Asia. Until the 1987 lifting of martial law, Taiwanese pop fell into two distinct categories. [7] Hokkien pop was sung in a native dialect and was popular among older and working-class listeners; it was strongly influenced by Japanese enka. In contrast, Mandarin pop, due to the assimilation policy of the authoritarian Kuomintang regime (1945–1996) that suppressed Taiwanese languages and culture, appealed to younger listeners. Asian superstar Teresa Teng originated from Taiwan and enjoys immense popularity amongst the Sinophone world and beyond.

With the resurgence of interest in native cultural identities starting in the late 1980s, a more distinct and modern form of Taiwanese pop formed. In 1989, a group of musicians called the Blacklist Studio released Song of Madness on Rock Records. Blending hip hop, rock and other styles, the album focused on the issues concerning everyday, modern people. Building on Song of Madness' success, the following year saw Lin Chiang release Marching Forward , which kickstarted what became known as New Taiwanese Song. Pop stars of the 1990s included Wu Bai, Chang Chen-yue, Jimmy Lin, Emil Wakin Chau (Zhoū Huájiàn) and so on. aMEI, who is renowned for her technically skilled and powerful vocals, is acclaimed to be the pop diva in Mandopop, and pop idols like Show Lo, Jay Chou, aMEI, Jolin Tsai and girl group S.H.E have now become the most famous and popular singers of Mandopop. For rock and band music, Mayday is said to have pioneered rock music in Taiwan for the generation of youth. For latest generation of pop music in Taiwan, singing reality shows such as One Million Star and Super idol have brought many ordinary people to fame, such as Jam Hsiao, Yoga Lin, Aska Yang, Lala Hsu, William Wei and so on.

The 1990s and early 2000s also saw the emergence of bands and artists of more diverse genres, such as Sodagreen, Deserts Chang, Cheer Chen, who have achieved commercial success and brought the new "indie" era of Taiwanese pop music. Other indie bands include Labor Exchange Band, Chairman, Sugar Plum Ferry, Backquarter, Fire EX, 8mm Sky, Seraphim, and ChthoniC. The annual Formoz Festival, Spring Scream, and Hohaiyan Rock Festival are representative gatherings within Taiwan's indie scene. Of these, Formoz Festival is notable for its international draw, with foreign artists such as Yo La Tengo, Moby, Explosions in the Sky, and Caribou headlining the event, while Spring Scream is the largest local band event, and Hohaiyan draws a mixed crowd of beach side party-goers and music appreciators alike.

Other Taiwanese popular singers/bands include Rainie Yang, Da Mouth, Amber Kuo, A-Lin, Magic Power and much more. The popular culture of the Taiwanese people has also influenced Chinese-speaking populations in other places such as Mainland China, Malaysia and Singapore.

There are hundreds of metal bands active in Taiwan. Bands such as Chthonic and Seraphim have drawn more attention to the metal scene in Taiwan, with Chthonic in particular attracting attention overseas, performing at European festivals such as Bloodstock Open Air.

The Bunun, also historically known as the Vonum, are a Taiwanese indigenous people and are best known for their sophisticated polyphonic vocal music. They speak the Bunun language. Unlike other aboriginal peoples in Taiwan, the Bunun are widely dispersed across the island's central mountain ranges. In the year 2000, the Bunun numbered 41,038. This was approximately 8% of Taiwan's total indigenous population, making them the fourth-largest indigenous group. They have five distinct communities: the Takbunuaz, the Takituduh, the Takibaka, the Takivatan, and the Isbukun.

Mandopop refers to Mandarin popular music. The genre has its origin in the jazz-influenced popular music of the 1930s Shanghai known as Shidaiqu, later influences came from Japanese enka, Hong Kong's Cantopop, and Taiwan's Hokkien pop — in particular the Campus Song folk movement of the 1970s. In contemporary times, it has become strongly influenced by K-pop. 'Mandopop' may be used as a general term to describe popular songs performed in Mandarin. The English term was coined around 1980 soon after "Cantopop" became a popular term for describing popular songs in Cantonese; "Mandopop" was used to describe Mandarin-language popular songs of that time, some of which were versions of Cantopop songs sung by the same singers with different lyrics to suit the different rhyme and tonal patterns of Mandarin. 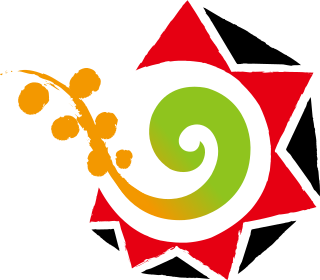 The Council of Indigenous Peoples, formerly known as the Council of Aboriginal Affairs, is a ministry-level body under the Executive Yuan in Taiwan. It was established to serve the needs of the country's indigenous populations as well as a central interface for the indigenous community with the government of the Republic of China.

Taiwanese pop, Tai-pop, T-pop, Minnan Pop and Taiwanese song (台灣歌), is a C-Pop genre sung in Taiwanese Hokkien and produced mainly in Taiwan. Hokkien pop is the most popular amongst Hoklo people in Taiwan, Mainland China, and the Overseas Chinese in Southeast Asia.

This is a timeline that show the development of Chinese music by genre and region. It covers the historic China as well as the geographic areas of Taiwan, Hong Kong and Macau.

Deserts Chang is a Taiwanese singer-songwriter. 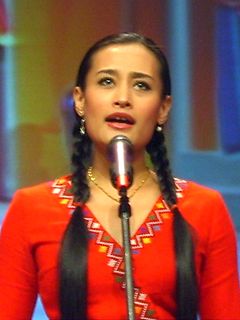 Samingad is an aboriginal Taiwanese pop singer and songwriter. She is an ethnic Puyuma. In her native Puyuma language Samingad means "Unique or Without equal". She was born 2 October 1977 in a Puyuma Township in Taitung County, to a father of Bunun descent and a mother of Puyuma descent. Her uncle is Purdur, the winner of the Best Mandarin Male Singer of the 11th Golden Melody Awards. Her younger sister, Jia Jia, is also a singer. 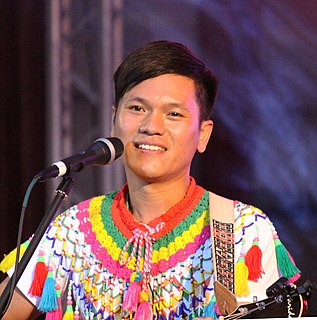 Suming Rupi is a Taiwanese indigenous musician, singer, songwriter and actor. He is a member of the "Lacienci" (拉千禧) age organization of A'tolan.

Lin Chiang-yi or Mayaw Dongi is a Taiwanese politician. He was the Minister of the Council of Indigenous Peoples (CIP) from 1 August 2013 until 20 May 2016. He is of the Amis people, one of the indigenous peoples of Taiwan.

Taiwanese Wave or Tairyu is a neologism originally coined in Japan to refer to the increase in the popularity of Taiwanese popular culture in the country, and to distinguish it from the Korean Wave co-existing in Japan. Many of Taiwanese dramas, songs as well as idol actors, singers, bands or groups have become popular throughout East Asia and Southeast Asia.

Chen Da (also Chen Ta; Chinese: 陳達; pinyin: Chén Dá; Wade–Giles: Ch'en2 Ta2; b. 1905 (1906?) – d. April 11, 1981) was a Taiwanese folk singer. He was part of Taiwan's folk music scene and worked as an analphabetic creator of lyrics. His spontaneous performances of traditional tunes became an object of study for many scholars focused on the music of Taiwan and brought him to the attention of writers engaged in music criticism including the novelist Wang Tuoh. According to the Journal of Music in China, Chen Da was "the only noted singer of Taiwanese folk singing." Chen Da is also referred to as a singer of “Hoklo folk songs,” a synonym of “Taiwanese folk songs.”