The artistic heritage of Taiwan is extremely diverse with multiple major influences and periods. Today Taiwan is one of the world's most significant art markets.

Stonecutters of the Changbin culture began to make art on Taiwan at least 30,000 years ago. Around 5,000 years ago jade and earthenware works started to appear. [1] Between 4000 BC and 2000 BC people in what is now Hualien produced and traded valuable jade ornaments and jewelry. [2] The Dapenkeng culture developed a unique style of pottery. [3] [4]

Art was first institutionalized in Taiwan during the Japanese Colonial period with the establishment of public schools dedicated to the fine arts. The Japanese introduced oil and watercolor paintings to Taiwan and Taiwanese artists were heavily influenced by their Japanese counterparts. As was typical of colonel rulers the Japanese did not establish tertiary institutions for art education in Taiwan, all students wishing to pursue an advanced degree in the arts had to travel to Japan to do so. [1]

When the Nationalists fled to Taiwan in 1949 they brought many of China’s most prestigious artists and a large portion of the former Qing Imperial art collection with them. The artists Huang Chun-pi, Pu Ru, and Chang Dai-chien who all came to Taiwan during this period are collectively known as the “three masters from across the strait.” The Nationalists also established the first art colleges and universities in Taiwan. Along with Chinese influences the Nationalists also allowed the United States to establish a series of military bases in Taiwan, American pop culture and artistic ideas such as abstract expressionism were introduced to Taiwan by the Americans. Schools such as the May Art Association, a revolutionary art group, and Eastern Art Association, an avant-garde group flourished during this time. [1] The Ton-Fan group, founded in Taipei in 1956 by eight artists, brought abstraction to Taiwan. The Ton-Fan group reacted to Government disapproval of avant-garde art by championing it. [5]

The next major influence came when the ROC left the United Nations in 1971, this unmooring from the international community caused artists to search for an identity and a sense of self, a search which continues up to the present. [6] Artists of this era such as Lee Shi-chi and Shiy De-jinn  [ zh ] adopted Taiwanese folk motifs and other elements from Taiwan’s traditional culture however the Taiwanese art scene still chafed under the KMT’s military dictatorship. [1]

Democratization in the late 1980s and the lifting of martial law granted Taiwanese artists freedom of expression for the first time in history. [1] The end of military rule allowed the Taiwanese to access films, literature, philosophy and culture from abroad which had been denied to them or censored. [7] The economic boom of the '80s and ‘90s also saw the financial resources of Taiwanese museums and patrons increase significantly. As Taiwan’s art scene matured there began to be a greater specialization in exhibit spaces with dedicated museums for things like photography and ceramics opening. In the 21st century Taiwan’s artistic community embraced new technologies and new mediums. [1] Many contemporary Taiwanese artists grapple with issues of globalization in their work. [8] LGBTQ artists in modern Taiwan enjoy a degree of freedom denied in other Asian countries. This has made Taiwan a haven and a hub for both domestic and international LGBTQ artists. [9]

Art collecting has a long tradition in Taiwan, however most important and deep-pocketed Taiwanese collectors prefer to fly under the radar. Taiwanese collectors are significant buyers of Chinese contemporary art as well as antiquities. [10] Both Sotheby’s and Christie’s routinely tour the highlights of their spring and autumn Impressionist and Modern and postwar sales in Taipei. [11] Taiwanese collectors have significant presence both at home and abroad, Taiwanese billionaire collector Pierre Chen is auction house Sotheby’s go-to guarantor for big-ticket items. [12] Taiwanese-German collector Maria Chen-Tu is one of the largest collectors of German art and is also active in Taiwan. In 2019 more than three hundred million dollars worth of artwork that she had loaned for exhibition in China went missing. [13]

By 1990 the Taiwanese art market was the biggest in Asia and served as a regional hub. [14] By 2000 Hong Kong and Taiwan held comparable shares of the market. [10] In 2006 Tamsui, an oil painting by Tan Ting-pho, was purchased in 2006 for $4.5 million (NT$144 million), setting a world record for an oil painting by an ethnically Chinese artist. [15] In the 21st century while no longer the largest art market in Asia (having been surpassed by China) the tastes of Taiwan’s collectors have matured and Taiwan remains the most cutting edge art market in Asia. [16]

The Taiwanese government believes that "A country’s level of democracy is reflected in the development of its performing arts." [18]

Completed in 2018 National Kaohsiung Center for the Arts is the largest performing arts center in the world. [19] [20]

Glove puppetry has a long history in Taiwan and is considered one of the country's traditional arts. [21]

Taiwanese cuisine has several variations. In addition to dishes from the majority Hoklo, there are also indigenous Taiwanese peoples, Hakka, Waishengren, and local derivatives of Japanese cuisine, as well as other types of Chinese cuisine from outside Taiwan or Fujian.

Green Party Taiwan is a political party in Taiwan established on 25 January 1996. Although the party is sympathetic to Taiwan nationalism and shares a number of centre-left positions with the Pan-Green Coalition, the party emphasizes campaigning primarily on social and environmental issues. The party is not a member of, and should not be confused with, the Pan-Green Coalition. Green Party Taiwan is a member of the Asia Pacific Greens Federation and participates in the Global Greens. 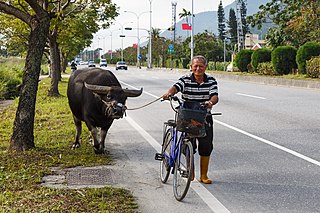 Agriculture is one of the main industries in Taiwan. It contributes to the food security, rural development and conservation of Taiwan. Around 24% of Taiwan's land is used for farming. Taiwan is a global leader in vertical farming. 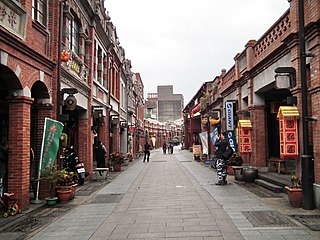 Sanxia District is an urban district in the southwestern part of New Taipei, Taiwan. It is the second largest district in New Taipei City after Wulai District.

Hung Tung was a Taiwanese painter who was notable for his folk style, and vivid colours. He is aid to have had a significant influence on the direction of Taiwanese Modern art in the 1970s and a was a forerunner in the Taiwanese Nativist art movement.

Justin Huang is a Taiwanese politician. Like his father Huang Ching-fong, Justin Huang joined the Kuomintang. He was a member of the National Assembly from 1996 to 2000. Huang was first elected to the Legislative Yuan in 2001. He served two full terms on the Legislative Yuan, and was reelected to a third in 2008. Huang stepped as a legislator in 2009 to run for Taitung County Magistrate. After two terms as county magistrate, Huang left office in 2018. 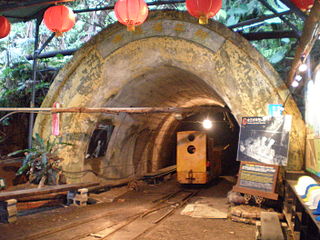 Mining has been practiced in Taiwan for hundreds of years. Sulfur was an early important resource collected on the island. Coal mining expanded in the 19th century to keep up with demand from increased foreign trade. Heavy industry was further expanded under Japanese rule, but air raids towards the end of World War II decimated mining infrastructure, falling below 19th century production levels. Copper mining expanded in the mid-20th century, but ended in the 1980s following a global collapse in the price of copper. 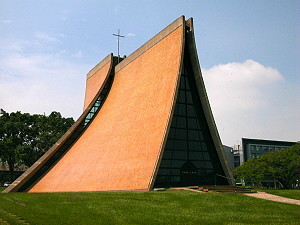 Chen Chi-kwan was a Taiwanese artist, architect, and educator, known in particular for his paintings and his architectural work for Tunghai University. He collaborated with I.M. Pei to design the Luce Memorial Chapel on the university campus – a hallmark of mid-century modernist architecture, which was completed in 1963.

Chuang Che is a Chinese artist. His work is largely abstract, combining influences of his Chinese heritage with Abstract Expressionism.

Jong Shyn Shipbuilding Company (JSSC) is a Taiwanese shipbuilder based in Kaohsiung, Taiwan. It is the largest private shipbuilder in Taiwan.

The maritime industries of Taiwan are a large part of Taiwan's economy. Industries of particular importance are shipbuilding, boat building, maritime transport, aquaculture, mariculture, commercial fishing, seafood processing, offshore wind power and various forms of tourism. Deep sea mining, especially of dormant hydrothermal vents, is also being considered for the future. In 2018 Taiwan was the fourth largest yacht building nation. Taiwan is home to a number of maritime museums and maritime colleges.

Chiashan Air Force Base is a military airport operated by the Republic of China Air Force in Hualien County, Taiwan. It is known for its extensive underground hangars. Hualien Airport operates within a 28 acre civilian section of the base. It is one of the most important defense installations on Taiwan as it houses the military’s most survivable aerial counter-attack forces.

The Taiwanese semiconductor industry, including IC manufacturing, design, and packing, forms a major part of Taiwan's IT industry. Due to its strong capabilities in OEM wafer manufacturing and a complete industry supply chain, Taiwan has been able to distinguish itself from its competitors and dominate the global marketplace. Taiwan is the unmatched leader of the global semiconductor industry with Taiwan Semiconductor Manufacturing Company (TSMC) alone accounting for more than 50% of the global market. In 2020, the sector accounted for US$115 billion in output.

Forestry in Taiwan was historically a significant industry. The logging of most of Taiwan's old growth forest has led to the sunset of the industry with remaining stands protected by law. Illegal logging remains a significant threat, especially to the oldest and most valuable trees.

Floriculture is a significant industry in Taiwan. Taiwan is one of the largest flower exporters in the world and the top producer of orchids.