Maurice Moses "Maury" Obstfeld (born 1952) is a professor of economics at the University of California, Berkeley and previously Chief Economist at the International Monetary Fund. He is also a nonresident senior fellow at the Peterson Institute for International Economics. [2]

He is well known for his work in international economics. He is among the most influential economists in the world according to IDEAS/RePEc. He graduated from University of Pennsylvania summa cum laude, Cambridge and MIT, where received his Ph.D. in 1979. Director of the Center for International and Development Economic Research (CIDER). He joined Berkeley in 1989 as a professor, following appointments at Columbia (1979–1986) and the University of Pennsylvania (1986–1989). He was also a visiting professor at Harvard between 1989 and 1991. Obstfeld serves as honorary advisor to the Bank of Japan's Institute of Monetary and Economic Studies. Among Obstfeld's honors are the Carroll Round Keynote Lecture, [3] Woodward Lecture, and Bernhard Harms Prize and Lecture in 2004. Obstfeld is a Fellow of the Econometric Society and the American Academy of Arts and Sciences. He is active as a research Fellow of CEPR, a research associate at NBER, and an International Research Fellow at the Kiel Institute for the World Economy. [4]

On June 3, 2014, the White House announced that Obstfeld would join the Council of Economic Advisers as lead macroeconomist. [5]

On July 20, 2015, Christine Lagarde, Managing Director of the International Monetary Fund (IMF), announced her intention to appoint Obstfeld as Economic Counsellor and Director of the IMF’s Research Department. Obstfeld succeeds Olivier Blanchard whose retirement was announced previously. He began his work at the Fund on September 8, 2015. [6]

The International Monetary Fund (IMF) is an international financial institution, headquartered in Washington, D.C., consisting of 190 countries working to foster global monetary cooperation, secure financial stability, facilitate international trade, promote high employment and sustainable economic growth, and reduce poverty around the world while periodically depending on the World Bank for its resources. Formed in July 1944, at the Bretton Woods Conference primarily by the ideas of Harry Dexter White and John Maynard Keynes, it came into formal existence in 1945 with 29 member countries and the goal of reconstructing the international monetary system. It now plays a central role in the management of balance of payments difficulties and international financial crises. Countries contribute funds to a pool through a quota system from which countries experiencing balance of payments problems can borrow money. As of 2016, the fund had XDR 477 billion.

Rüdiger "Rudi" Dornbusch was a German economist who worked in the United States for most of his career.

Stanley Fischer is an Israeli American economist and former vice chairman of the Federal Reserve. Born in Northern Rhodesia, he holds dual citizenship in Israel and the United States. He served as governor of the Bank of Israel from 2005 to 2013. He previously served as chief economist at the World Bank. On January 10, 2014, United States President Barack Obama nominated Fischer to be Vice-Chairman of the US Federal Reserve Board of Governors. On September 6, 2017, Stanley Fischer announced that he was resigning as Vice-Chairman for personal reasons effective October 13, 2017. 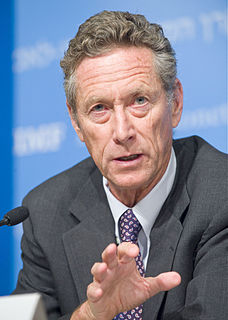 Olivier Jean Blanchard is a French economist and professor who is a Senior Fellow at the Peterson Institute for International Economics. He was the chief economist at the International Monetary Fund from September 1, 2008 to September 8, 2015. Blanchard was appointed to the position under the tenure of Dominique Strauss-Kahn; he was succeeded by Maurice Obstfeld. He also is a Robert M. Solow Professor of Economics emeritus at the Massachusetts Institute of Technology (MIT). He is one of the most cited economists in the world, according to IDEAS/RePEc. 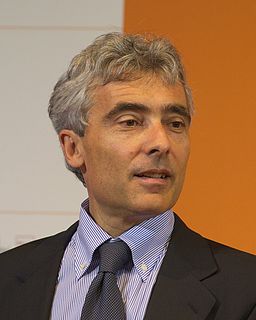 Tito Michele Boeri is an Italian economist, currently professor of economics at Bocconi University, Milan and acts as Scientific Director of the Fondazione Rodolfo Debenedetti.

José De Gregorio Rebeco is a Chilean economist, academic, researcher, consultant and politician. He has been the Governor of the Central Bank of Chile, Minister of the Economy, Mining and Energy during the administration of Ricardo Lagos and is currently the Dean of the School of Economics and Business of the Universidad de Chile. He is also a nonresident Senior Fellow at the Peterson Institute for International Economics.

Philip Richard Lane is an Irish economist who has served as a Member of the Executive Board of the European Central Bank since June 2019. He previously served as the Governor of the Central Bank of Ireland from 2015 to 2019. He is the ECB’s Chief Economist and is seen by many to provide an academic counterweight to the traditional political abilities of ECB President, Christine Lagarde. 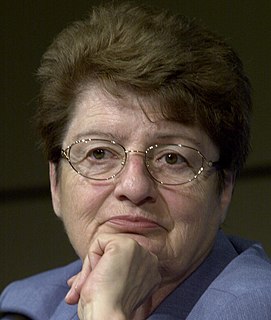 The Chief Economist of the International Monetary Fund (IMF) is also the Economic Counsellor and Director of the Fund's Research Department and is responsible for providing independent advice to the Fund on its policy issues, integrating ideas of the research in the design of policies, conveying these ideas to the policymakers inside and outside the fund and managing all research done at IMF. 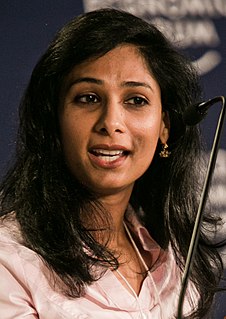 Gita Gopinath is an Indian American economist who has been the Chief Economist of the International Monetary Fund since 2019. In that role she is the Director of IMF's Research Department and the Economic Counsellor of the Fund.

Michael Louis Mussa was an American economist and academic. He was chief economist at the International Monetary Fund from 1991 to 2001 and was a member of the Council of Economic Advisers from 1986 to 1988. He was also a Senior Fellow at the Peterson Institute for International Economics from 2001 until his death in 2012.

YannisStournaras is a Greek economist who has been the Governor of the Bank of Greece since June 2014. 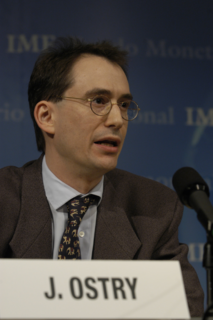 Jonathan David Ostry is an international economist, who is currently Deputy Director of the Research Department of the International Monetary Fund in Washington DC. He is also a Research Fellow at the Centre for Economic Policy Research (CEPR) in London, England. His recent work has focused on the management of international capital flows, in particular the role of capital controls; this work has been influential in bringing about a shift in the institutional position of the IMF on capital controls. Ostry has also published influential studies on the relationship between income inequality and economic growth, where his work—which has featured prominently in the financial press—suggests that high income inequality and a failure to sustain economic growth may be two sides of the same coin. His other work focuses on fiscal sustainability issues. Ostry has many distinguished academic publications, and his work has been cited widely in scholarly journals, and in the press, including The Economist, the Financial Times, The Wall Street Journal, The New York Times and The Washington Post. Ostry was listed in Who’s Who in Economics in 2003. He was named one of the 100 most powerful people in global finance by Worth magazine in 2016, and as one of the economists whose research shaped the world in 2017.

Atish Rex Ghosh is an international economist, who is currently the Historian of the International Monetary Fund. His recent work has focused on issues related to the stability of the international monetary system, including exchange rate regimes, external balance dynamics, capital flows and capital controls, monetary and foreign exchange intervention policies, fiscal space and debt sustainability, and international policy coordination. His work on the management of cross-border capital flows, notably the role of capital controls, has played an important role in influencing the IMF's institutional position on the use of capital controls. Ghosh has also published numerous influential studies on international policy coordination and exchange rate regimes, including three books: Economic Cooperation in an Uncertain World ; Exchange Rate Regimes: Choices and Consequences ; and Currency Boards in Retrospect and Prospect. In addition, he is the author of Nineteenth Street, NW—a fictional novel about a global financial crash.

Connel Fullenkamp is an economist and the Director of Undergraduate Studies and Professor of the Practice in economics at Duke University, where he teaches core economics and financial economics courses. In addition to his work at Duke University, he consults for the IMF Institute for Capacity Development at the International Monetary Fund. As a member of the IMF's finance team, he trains government officials and central bankers in financial market regulation, with a focus on derivatives and emerging financial instruments. He has also collaborated with The Great Courses to produce several lecture series on economics and investing and consults for The New York Times as a faculty contributor to the NYT in Education courses in microeconomics and macroeconomics.

Huang Yiping (黄益平) is a Professor of Economics at the National School of Development at Peking University. He is a highly recognized expert of financial services in China.