Last updated February 18, 2022
Measure of an engine's capacity to do work

= work per cycle in joule;

= number of revolutions per power stroke (for a 4-stroke engine,

= number of revolutions per second;

Reordering to put work on the left:

Since the torque T is related to the angular speed (which is just N·2π) and power produced,

then the equation for MEP in terms of torque is:

Speed has dropped out of the equation, and the only variables are the torque and displacement volume. Since the range of maximum brake mean effective pressures for good engine designs is well established, we now have a displacement-independent measure of the torque-producing capacity of an engine design – a specific torque of sorts. This is useful for comparing engines of different displacements. Mean effective pressure is also useful for initial design calculations; that is, given a torque, standard MEP values can be used to estimate the required engine displacement. However, mean effective pressure does not reflect the actual pressures inside an individual combustion chamber – although the two are certainly related – and serves only as a convenient measure of performance.

MEP from torque and displacement

Power from MEP and crankshaft speed

If we know the crankshaft speed, we can also determine the engine's power output from the MEP figure:

As piston engines usually have their maximum torque at a lower rotating speed than the maximum power output, the BMEP is lower at full power (at higher rotating speed). If the same engine is rated 76 kW at 5400 min−1 = 90 s−1, and its BMEP is 0.844 MPa, we get the following equation:

Mean effective pressure (MEP) is defined by the location measurement and method of calculation, some commonly used MEPs are given here. 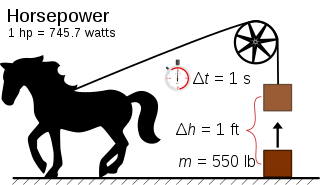 Horsepower (hp) is a unit of measurement of power, or the rate at which work is done, usually in reference to the output of engines or motors. There are many different standards and types of horsepower. Two common definitions used today are the mechanical horsepower, which is about 745.7 watts and the metric horsepower, which is approximately 735.5 watts.

Tidal acceleration is an effect of the tidal forces between an orbiting natural satellite and the primary planet that it orbits. The acceleration causes a gradual recession of a satellite in a prograde orbit away from the primary, and a corresponding slowdown of the primary's rotation. The process eventually leads to tidal locking, usually of the smaller body first, and later the larger body. The Earth–Moon system is the best-studied case. 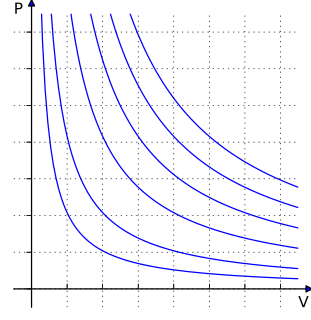 The tax horsepower or taxable horsepower was an early system by which taxation rates for automobiles were reckoned in some European countries such as Britain, Belgium, Germany, France and Italy; some US states like Illinois charged license plate purchase and renewal fees for passenger automobiles based on taxable horsepower. The tax horsepower rating was computed not from actual engine power but by a mathematical formula based on cylinder dimensions. At the beginning of the twentieth century, tax power was reasonably close to real power; as the internal combustion engine developed, real power became larger than nominal taxable power by a factor of ten or more.

The magnetic moment is the magnetic strength and orientation of a magnet or other object that produces a magnetic field. Examples of objects that have magnetic moments include: loops of electric current, permanent magnets, elementary particles, various molecules, and many astronomical objects.

The Debye–Waller factor (DWF), named after Peter Debye and Ivar Waller, is used in condensed matter physics to describe the attenuation of x-ray scattering or coherent neutron scattering caused by thermal motion. It has also been called the B factor or the temperature factor. Often, "Debye–Waller factor" is used as a generic term that comprises the Lamb–Mössbauer factor of incoherent neutron scattering and Mössbauer spectroscopy.

In stellar physics, the Jeans instability causes the collapse of interstellar gas clouds and subsequent star formation, named after James Jeans. It occurs when the internal gas pressure is not strong enough to prevent gravitational collapse of a region filled with matter. For stability, the cloud must be in hydrostatic equilibrium, which in case of a spherical cloud translates to:

ONE of the fundamental problems of mechanical engineering is that of transmitting energy found in nature, after suitable transformation, to some point at which can be made available for performing useful work. The methods of transmitting power known and practised by engineers are broadly included in two classes: mechanical including hydraulic, pneumatic and wire rope methods; and electrical methods....According to the new system, energy is transmitted from one point to another, which may be at a considerable distance, by means of impressed variations of pressure or tension producing longitudinal vibrations in solid, liquid or gaseous columns. The energy is transmitted by periodic changes of pressure and volume in the longitudinal direction and may be described as wave transmission of power, or mechanical wave transmission. – Gogu Constantinescu