The following is a list of Foreign Ministers of Zambia since the country gained independence in 1964: [1]

A foreign affairs minister or minister of foreign affairs is generally a cabinet minister in charge of a state's foreign policy and relations. The formal title of the top official varies between countries. In the United States it is "Secretary of State." The foreign minister typically reports to the head of government.

International recognition of Kosovo, since its declaration of independence from Serbia enacted on 17 February 2008, has been mixed, and the international community is divided on the issue.

There is a small but recognisable community of Indians in Zambia. Unlike the better-known Indian communities of South East Africa, they were little-studied by historians until the 2000s.

Russia–Zambia relations is the bilateral relationship between Russia and Zambia.

Given Lubinda is a Zambian politician who served in the Cabinet of Zambia as Minister of Justice. He is a former Member of Parliament for the National Assembly of Zambia for Kabwata Constituency in Lusaka. He was first elected as Kabwata MP in 2001 under the PF ticket and was Minister of Foreign Affairs from 2012 to 2013. He is also the current Vice President of the former ruling party the Patriotic Front. Lubinda is of mixed-race parentage. He is known as an outspoken politician.

Dipak Kumar A. Patel is a Zambian politician of Hindu Indian origin. His ancestral roots traces back to Gujarat, India. He served long tenures both as a legislator and as the Minister of Trade, Commerce, and Industry.

Denmark–Zambia relations refers to the historical and current bilateral relationship between Denmark and Zambia. Denmark has an embassy in Lusaka, and Zambia is represented in Denmark, through its embassy in Stockholm, Sweden. In 1980, relations were described as "warm".

Visa requirements for Zambian citizens are administrative entry restrictions by the authorities of other states placed on citizens of Zambia. As of 02 July 2019, Zambian citizens had visa-free or visa on arrival access to 69 countries and territories, ranking the Zambian passport 75th in terms of travel freedom according to the Henley Passport Index.

Cannabis in Zambia is illegal for recreational use. In December 2019, by unanimous decision, it was legalized for export and medicinal purposes only. Cannabis is known as Zam-Blaze, chwang, or dobo in Zambia. 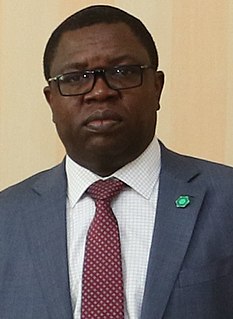 Joseph Malanji is a Zambian politician and business executive currently serving as a member of the National Assembly. He was Minister of Foreign Affairs between 2018 and 2021.

Kosovar–Zambian relations are foreign relations between Kosovo and Zambia.