The Palace of Venaria (Italian: Reggia di Venaria Reale) is a former royal residence and gardens located in Venaria Reale, near Turin in the Metropolitan City of Turin of the Piedmont region in northern Italy. With 80,000m² in palace area and over 950.000m² in premises, it is one the largest palaces in the world. It is one of the Residences of the Royal House of Savoy, included in the UNESCO Heritage List in 1997.

The Palace was designed and built from 1675 by Amedeo di Castellamonte, commissioned by duke Charles Emmanuel II, who needed a base for his hunting expeditions in the heathy hill country north of Turin. The name itself derives from Latin, Venatio Regia meaning "Royal Hunt". It was enlarged to become a luxurious residence for the House of Savoy. The palace complex became a masterpiece of Baroque architecture, and was filled with decoration and artwork. It fell into disuse at the end of the 18th century. After the Napoleonic wars, it was used for military purposes until 1978, when its renovation begun, leading to the largest restoration project in European history. It opened to the public on October 13th 2007, and it has since become a major tourist attraction and exhibition space.

It is noted for its monumental architecture and Baroque interiors by Filippo Juvarra, including the Galleria Grande and its marble decorations, the chapel of St. Uberto, and its extensive gardens. It received 1,048,857 visitors in 2017, making it the sixth most visited museum in Italy. [1]

Charles Emmanuel was inspired by the example of the Castle of Mirafiori, built by Duke Charles Emmanuel I for his wife Catherine Michelle of Spain. Keen to leave a memorial of himself and his wife, Marie Jeanne of Savoy-Nemours, he bought the two small villages of Altessano Superiore and Altessano Inferiore from the Milanese-origin Birago family, who had created here a large complex of plants. The place was rechristened Venaria for his future function as hunting base (Venatio, in Latin). The construction of this residence fell in the larger plan of surrounding the city of Turin with a garland of delicacies (Corona di Delizie), which included the Palazzina di caccia of Stupinigi, Castle of Rivoli, Villa della Regina, and others.

The design was commissioned in 1658 to architects Amedeo di Castellamonte and Michelangelo Garove  [ it ]. The project envisioned a grandiose ensemble of palace, gardens, hunting woods, and a new city, bearing a noteworthy scenographic impact. Tdjacent town's plan was circular to reflect the round shape of the collar of the Supreme Order of the Most Holy Annunciation, a dynastic order created by the House of Savoy. In 1675 the borough and the palace were nearly completed, including the so-called Reggia di Diana (Royal Residence of Diana, the heart of the complex. Works however continued until the next century, as in 1693 French invasion troops are known to have destroyed some buildings and Duke (future King) Victor Amadeus II had the residence modified according to French canons, with the intent of rivalling the Palace of Versailles. Starting in 1699, the new project director was Michelangelo Garove, who followed Victor Amadeus' intent of building an ever more grandiose palace.

Further damage was inflicted during the Siege of Turin (1706), when the French troops under Louis d'Aubusson de La Feuillade were garrisoned there. After the Savoyard victory, Victor Amadeus placed Filippo Juvarra in charge of the project in 1716. Juvarra completed the chapel, the Great Gallery, the Citronerie, and the stable, elevating the palace to a Baroque masterpiece. During the reign of Charles Emmanuel III, under the direction of Benedetto Alfieri, the palace was enlarged with new stables, galleries, and supporting buildings. With the fall of the Ancien Régime, the palace fell in disuse.

During the Napoleonic domination, the structures were turned into barracks and the gardens destroyed to create a training ground. The complex maintained this role also after the fall of Napoleon, and was used by the Italian Army until 1978, when it was sold to the Ministry of Culture.

Restoration works were begun in 1999, and encapsulated the palace, gardens, and the historic center of the town. It was the largest restoration project in European history, with 100.000 m² of buildings area, 1.000 frescoes, 9.5000 m² stuccoes, 800.000 m² garden area being renovated. The complex was open for tourism from 13 October 2007, and has since become a major turist destination and space for exhibitions and events.

The entrance of the palace leads into the Cour d'honneur ("Honour Court"), which once housed a fountain with a deer. The main facade, covered in the 17th century section with plaster and featuring cornucopias, shells and fruits, is connected on the right by section with exposed brickwork added in the 18th century. The two towers date to the Michelangelo Garove period (1669–1713) and are covered with multicolor pentagonal tiles in ceramics, which are united by a large gallery, known as Galleria Grande.

The interiors originally housed a large collection of stuccos, statues, paintings (according to Amedeo di Castellamonte, up to 8,000) from some of the court artists of the times, such as Vittorio Amedeo Cignaroli, Pietro Domenico Olivero  [ it ] and Bernardino Quadri.

The original gardens of the residence are now totally disappeared, since French troops turned them into training grounds. Earlier drawings show an Italian garden with three terraces connected by elaborate stairways and architectural features such as a clock tower in the first court, the fountain of Hercules, a theater and parterres.

Recent works have recreated a park in modern style, exhibiting modern works by Giuseppe Penone, including a fake 12 m-high cedar housing the thermic discharges of the palace.

Church of Sant'Uberto and other 18th century additions

After the death of Garove (1713), Juvarra built the Grand Gallery and in parallel built a church dedicated to St. Hubertus, patron of the hunters (1716–1729). The church is strictly included within the palace's structure, so that it was impossible to build a dome: this was then frescoes trompe-l'oeil from inside.

Other works of the Juvarra period included the stables, the citroneria (fruit grows, 1722–1728) and the renovation in French-style of the facades.

The last buildings date from the mid-18th and early 19th centuries (stables, riding school, stair of the Reggia di Diana, gallery of Sant'Uberto); subsequently the Palace was abandoned in favour of the Palazzina di Caccia di Stupinigi (1729), which was by then more in tune with the tastes of the European courts. 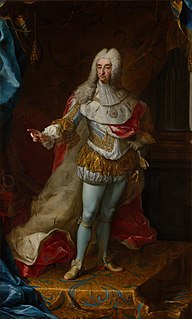 Victor Amadeus II was Duke of Savoy from 1675 to 1730. He also held the titles of marquis of Saluzzo, duke of Montferrat, prince of Piedmont and count of Aosta, Moriana and Nice.

Filippo Juvarra was an Italian architect, active in a late-Baroque style, who worked primarily in Italy, Spain, and Portugal. 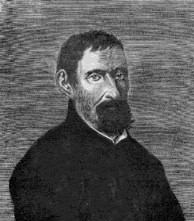 Camillo-Guarino Guarini was an Italian architect of the Piedmontese Baroque, active in Turin as well as Sicily, France, and Portugal. He was a Theatine priest, mathematician, and writer.

The Palazzina di caccia of Stupinigi is one of the Residences of the Royal House of Savoy in northern Italy, part of the UNESCO World Heritage Sites list. Built as a royal hunting lodge in the early 18th century, it is located in Stupinigi, a suburb of the town of Nichelino, 10 km (6 mi) southwest of Turin

Venaria Reale is a comune (municipality) in the Metropolitan City of Turin in the Italian region Piedmont, located about 8 kilometres (5 mi) northwest of Turin. 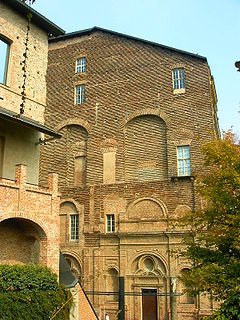 The Castle of Rivoli is a former Residence of the Royal House of Savoy in Rivoli. It is currently home to the Castello di Rivoli – Museo d'Arte Contemporanea, the museum of contemporary art of Turin.

The Castle of Valentino is a historic building in the north-west Italian city of Turin. It is located in Parco del Valentino, and is the seat of the Architecture Faculty of the Polytechnic University of Turin. It is one of the Residences of the Royal House of Savoy included in the list of UNESCO World Heritage Sites in 1997.

Carlo Cognengo di Castellamonte (1560–1641) was an Italian architect, civil and military engineer, one of the main exponents of Piedmontese Baroque. 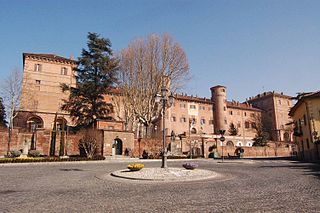 The Castle of Moncalieri is a palace in Moncalieri, Piedmont, in northern Italy. It is one of the Residences of the Royal House of Savoy listed by UNESCO as World Heritage Sites in 1997.

Stupinigi, with some 200 inhabitants, is today a hamlet of the comune of Nichelino, in the Metropolitan City of Turin. It borders with the comuni (municipalities) of Candiolo and Orbassano on the southwestern outskirts of Turin, about 10 km from the centre of the city. Before 1869, it formed part of the comune of Vinovo.

The Basilica of Superga is a church in the vicinity of Turin. 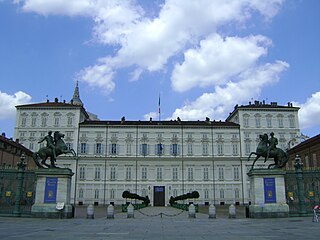 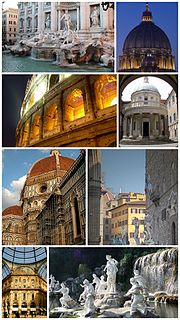 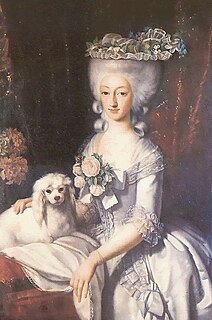 La Mandria Regional Park is a park in the comuni of Venaria Reale and Druento, near Turin, northern Italy. Founded in 1978 by the regional council of Piedmont, it occupies a wide area between the Stura di Lanzo torrent and the north-western part of Turin and Venaria.

Giuseppe Duprà (1703–1784) was an Italian painter born at Turin who was active in the eighteenth century.