Son jarocho ("Veracruz Sound") is a regional folk musical style of Mexican Son from Veracruz, a Mexican state along the Gulf of Mexico. It evolved over the last two and a half centuries along the coastal portions of southern Tamaulipas state and Veracruz state, hence the term jarocho , a colloquial term for people or things from the port city of Veracruz.

It represents a fusion of Spanish (Andalusian and Canary Islander) and African musical elements, reflecting the population which evolved in the region from Spanish colonial times. Lyrics include humorous verses and subjects such as love, nature, sailors, and cattle breeding that still reflect life in colonial and 19th century Mexico. Verses are often shared with the wider Mexican and Hispanic Caribbean repertoire and some have even been borrowed from famous works by writers of the Spanish "Siglo de Oro". It is usually performed by an ensemble of musicians and instruments which collectively are termed a "conjunto jarocho". [1] Son jarocho is often played only on jaranas and sung in a style in which several singers exchange improvised verses called décimas , often with humorous or risqué content.

The instruments most commonly associated with son jarocho are the jarana jarocha, a small guitar-like instrument used to provide a harmonic base, with some double strings arranged in a variety of configurations; the requinto jarocho, another small guitar-like instrument plucked with a long pick traditionally made from cow-horn, usually tuned to a higher pitch and with a four or five thick nylon strings; the diatonic arpa jarocha; the leona, a type of acoustic bass guitar, and sometimes a minor complement of percussion instruments such as the pandero (especially in the style of Tlacotalpan), the quijada (an instrument made of a donkey or horse jawbone) or the güiro. [2] Some groups add the marimbol, a plucked key box bass, and the cajón, (although the Peruvian version, not the Mexican cajón de tapeo).

The most widely known son jarocho is "La Bamba", which has been popularized through the version by Ritchie Valens and the American movie of the same name. Other famous sones jarochos are "El Coco" and "La Iguana" and "El Cascabel", all of which have a call and response form, and "El Chuchumbé", "La Bruja".

Fermin Herrera (a Jarocho harpist) has taught many people, such as John Robles and Antonio Moraza, how to play. Because of him, many groups in the US play or even know about son jarocho. More recently, instruments and rhythms from son jarocho have been used by rock groups such as Café Tacuba, Quetzal, 22 Pesos, Ozomatli, and Zack de la Rocha. East L.A. rockers Los Lobos have also recorded in the Jarocho genre, as has Mexican-American artist Lila Downs. More recently son jarocho music has experienced a resurgence in the United States. US-based bands now playing (as of 2012) or using elements of the genre include Radio Jarocho, David Wax Museum, Son del Centro, Las Cafeteras, Son del Viento, Los Cenzontles and Jarana Beat. [3] 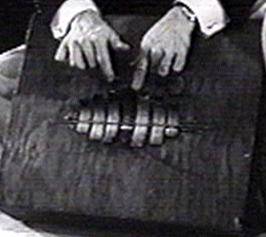 Huapango is a family of Mexican music styles. The word likely derives from the Nahuatl word cuauhpanco that literally means 'on top of the wood', alluding to a wooden platform on which dancers perform zapateado dance steps. It is interpreted in different forms, the most common being the classic huapango interpreted by a trio of musicians ; the huapango norteño interpreted by a group ; and the huapango de mariachi, which can be performed by a large group of musicians. 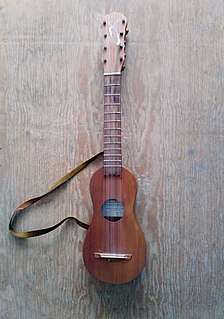 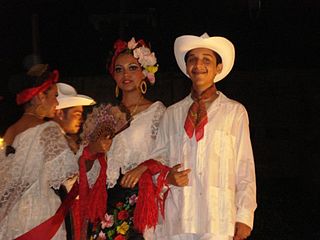 A jarocho is a person, item or style of music from the city of Veracruz, Mexico.

The vals criollo, or Peruvian waltz, is an adaptation of the European waltz brought to the Americas during colonial times by Spain. In the Viceroyalty of Peru, the waltz was gradually adapted to the likings of the Criollo people. In the 20th century, the genre became symbolic of the nation's culture as it gained widespread popularity in the country.

Son de Madera is a son jarocho band based in Veracruz, Mexico. Its core members are Ramón Gutiérrez Hernández, Tereso Vega, and Rubí Oseguera Rueda. The band was founded in 1992.

Los Soneritos is a group dedicated to Mexican folk music and dance, founded in 2005 in Colima by Omar Alejandro Rojas Ramos. Rojas Ramos formed the group while working at a primary school, giving classes in music and dance. It was formed with the express intention of preserving and promoting folk music and dance to youths and children. The group mostly performs music and dance from its home state of Veracruz such as son, fandango and zapateado, but other similar music such as son from the west of Mexico and the “mitote folkorico” is also in the repertoire. Members of the group have done research about traditional music and dance as well as composed their own original pieces.

Son mexicano is a style of Mexican folk music and dance that encompasses various regional genres, all of which are called son. The term son literally means "sound" in Spanish, and is also applied to other unrelated genres, most notably son cubano.