Last updated May 25, 2020
For sortable tables in Wikipedia, see Help:Sorting

A table is an arrangement of data in rows and columns, or possibly in a more complex structure. Tables are widely used in communication, research, and data analysis. Tables appear in print media, handwritten notes, computer software, architectural ornamentation, traffic signs, and many other places. The precise conventions and terminology for describing tables vary depending on the context. Further, tables differ significantly in variety, structure, flexibility, notation, representation and use. [1] [2] [3] [4] [5] In books and technical articles, tables are typically presented apart from the main text in numbered and captioned floating blocks.

The elements of a table may be grouped, segmented, or arranged in many different ways, and even nested recursively. Additionally, a table may include metadata, annotations, a header, [6] a footer or other ancillary features. [5]

The following illustrates a simple table with three columns and nine rows. The first row is not counted, because it is only used to display the column names. This is called a "header row".

The concept of dimension is also a part of basic terminology. [7] Any "simple" table can be represented as a "multi-dimensional" table by normalizing the data values into ordered hierarchies. A common example of such a table is a multiplication table.

In multi-dimensional tables, each cell in the body of the table (and the value of that cell) relates to the values at the beginnings of the column (i.e. the header), the row, and other structures in more complex tables. This is an injective relation: each combination of the values of the headers row (row 0, for lack of a better term) and the headers column (column 0 for lack of a better term) is related to a unique cell in the table:

The first column often presents information dimension description by which the rest of the table is navigated. This column is called "stub column". Tables may contain three or multiple dimensions and can be classified by the number of dimensions. Multi-dimensional tables may have super-rows - rows that describe additional dimensions for the rows that are presented below that row and are usually grouped in a tree-like structure. This structure is typically visually presented with an appropriate number of white spaces in front of each stub's label. [8]

In literature tables often present numerical values, cumulative statistics, categorical values, and at times parallel descriptions in form of text. [9] They can condense large amount of information to a limited space and therefore they are popular in scientific literature in many fields of study.

As a communication tool, a table allows a form of generalization of information from an unlimited number of different social or scientific contexts. It provides a familiar way to convey information that might otherwise not be obvious or readily understood.

There are several specific situations in which tables are routinely used as a matter of custom or formal convention.

Modern software applications give users the ability to generate, format, and edit tables and tabular data for a wide variety of uses, for example:

Tables have uses in software development for both high-level specification and low-level implementation. Usage in software specification can encompass ad hoc inclusion of simple decision tables in textual documents through to the use of tabular specification methodologies, examples of which include SCR [10] and Statestep. [11] Proponents of tabular techniques, among whom David Parnas is prominent, emphasize their understandability, as well as the quality and cost advantages of a format allowing systematic inspection, [12] while corresponding shortcomings experienced with a graphical notation were cited in motivating the development of at least two tabular approaches. [11] [13]

At a programming level, software may be implemented using constructs generally represented or understood as tabular, whether to store data (perhaps to memoize earlier results), for example, in arrays or hash tables, or control tables determining the flow of program execution in response to various events or inputs.

In medieval counting houses, the tables were covered with a piece of checkered cloth, to count money. Exchequer is an archaic term for the English institution which accounted for money owed to the monarch. Thus the checkerboard tables of stacks of coins are a concrete realization of this information.

A spreadsheet is a computer application for organization, analysis and storage of data in tabular form. Spreadsheets were developed as computerized analogs of paper accounting worksheets. The program operates on data entered in cells of a table. Each cell may contain either numeric or text data, or the results of formulas that automatically calculate and display a value based on the contents of other cells. A spreadsheet may also refer to one such electronic document.

Flexible Image Transport System (FITS) is an open standard defining a digital file format useful for storage, transmission and processing of data: formatted as multi-dimensional arrays, or tables. FITS is the most commonly used digital file format in astronomy. The FITS standard was designed specifically for astronomical data, and includes provisions such as describing photometric and spatial calibration information, together with image origin metadata.

A comma-separated values (CSV) file is a delimited text file that uses a comma to separate values. Each line of the file is a data record. Each record consists of one or more fields, separated by commas. The use of the comma as a field separator is the source of the name for this file format. A CSV file typically stores tabular data in plain text, in which case each line will have the same number of fields.

In computer science, a graph is an abstract data type that is meant to implement the undirected graph and directed graph concepts from the field of graph theory within mathematics.

The Zachman Framework is an enterprise ontology and is a fundamental structure for Enterprise Architecture which provides a formal and structured way of viewing and defining an enterprise. The ontology is a two dimensional classification schema that reflects the intersection between two historical classifications. The first are primitive interrogatives: What, How, When, Who, Where, and Why. The second is derived from the philosophical concept of reification, the transformation of an abstract idea into an instantiation. The Zachman Framework reification transformations are: Identification, Definition, Representation, Specification, Configuration and Instantiation.

In statistics, a contingency table is a type of table in a matrix format that displays the (multivariate) frequency distribution of the variables. They are heavily used in survey research, business intelligence, engineering and scientific research. They provide a basic picture of the interrelation between two variables and can help find interactions between them. The term contingency table was first used by Karl Pearson in "On the Theory of Contingency and Its Relation to Association and Normal Correlation", part of the Drapers' Company Research Memoirs Biometric Series I published in 1904. 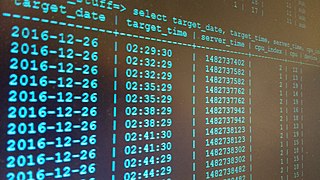 In a relational database, a column is a set of data values of a particular simple type, one value for each row of the database. A column may contain text values, numbers, or even pointers to files in the operating system. Some relational database systems allow columns to contain more complex data types; whole documents, images or even video clips are examples. A column can also be called an attribute.

Chemical table file is a family of text-based chemical file formats that describe molecules and chemical reactions. One format, for example, lists each atom in a molecule, the x-y-z coordinates of that atom, and the bonds among the atoms.

A table is a collection of related data held in a table format within a database. It consists of columns and rows.

A pivot table is a table of statistics that summarizes the data of a more extensive table. This summary might include sums, averages, or other statistics, which the pivot table groups together in a meaningful way.

Data drilling refers to any of various operations and transformations on tabular, relational, and multidimensional data. The term has widespread use in various contexts, but is primarily associated with specialized software designed specifically for data analysis.

Data cleansing or data cleaning is the process of detecting and correcting corrupt or inaccurate records from a record set, table, or database and refers to identifying incomplete, incorrect, inaccurate or irrelevant parts of the data and then replacing, modifying, or deleting the dirty or coarse data. Data cleansing may be performed interactively with data wrangling tools, or as batch processing through scripting.

Entity–attribute–value model (EAV) is a data model to encode, in a space-efficient manner, entities where the number of attributes that can be used to describe them is potentially vast, but the number that will actually apply to a given entity is relatively modest. Such entities correspond to the mathematical notion of a sparse matrix.

Numbers is a spreadsheet application developed by Apple Inc. as part of the iWork productivity suite alongside Keynote and Pages. Numbers is available for iOS, and macOS High Sierra or newer. Numbers 1.0 on OS X was announced on 7 August 2007, making it the newest application in the iWork suite. The iPad version was released on 27 January 2010. The app was later updated to support iPhone and iPod Touch.