This reserve came about after Chief Piyesiw-awasis' headmen were forced to sign an adhesion to Treaty Six in August, 1879 at Special Area No. 4. Piyesiw-awasis was one of Big Bear's bodyguards until starvation and sickness led his people to adhere to the treaty. However, Piyesiw-awasis did not put his mark to the treaty document .

Edam is a village within the Rural Municipality of Turtle River No. 469, in the province of Saskatchewan, Canada. Edam is located off Highway 26, south of Turtleford and north of Vawn. The village had a population of 480 in the 2016 Canada Census,.

The George Gordon First Nation is a First Nations band government located near the village of Punnichy, Saskatchewan, in Canada. The nation has an enrolled population of 3,752 people, 1,191 of whom live on the band's reserves. Elected Chief Byron Bitternose leads the First Nation. Their territory is located on the Gordon 86 reserve, as arranged by Treaty 4.

The Enoch Cree Nation #440 is a First Nations band government in Alberta, Canada. Members of the Nation are of Cree ancestry and speak the Plains Cree dialect of the Cree language group. The band was a signatory of Treaty Six and is a current member of the Confederacy of Treaty Six First Nations.

Mistawasis Nêhiyawak is a Cree First Nation band government in Leask, Saskatchewan, Canada. Their settlement is roughly sixty-eight kilometres west of Prince Albert. The Nation has one reserve with an area of approximately 125.44 square kilometres.

John Baptiste Tootoosis was a prominent Cree First Nations leader in Canada. He is the grandson of Yellow Mud Blanket, the brother of legendary Cree leader Pitikwahanapiwiyin, also known as Poundmaker.

The Flying Dust First Nation is a Cree First Nation band government located adjacent to the city of Meadow Lake in Saskatchewan, Canada. Highway 55 goes though the band's reserve community. 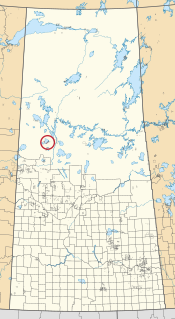 Canoe Lake 165 is an Indian reserve of the Canoe Lake Cree First Nation in the boreal forest of northern Saskatchewan, Canada. Its location is on Canoe Lake approximately thirty miles west of Beauval, within the ancient hunting grounds of the Woodland Cree. In the 2016 Canadian Census, it recorded a population of 912 living in 250 of its 273 total private dwellings. In the same year, its Community Well-Being index was calculated at 53 of 100, compared to 58.4 for the average First Nations community and 77.5 for the average non-Indigenous community. The reserve includes the settlement of Canoe Narrows. 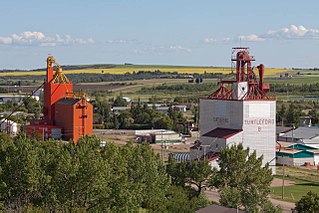 Turtleford is a town in the rural municipality of Mervin No. 499, in the Canadian province of Saskatchewan. Turtleford is located on Highway 26 near the intersection / concurrency with Highway 3 and Highway 303. The nearest large communities are North Battleford and Lloydminster. The Turtle River runs through Turtleford, and nearby are Bright Sand Lake and Turtle Lake.

Meadow Lake No. 588 is a rural municipality in the Canadian province of Saskatchewan, located in the northwest part of the province near the town of Meadow Lake. Also within the geographical boundaries of the R.M. are the communities of Dorintosh and Greig Lake as are several First Nations Indian reserves. None of these enclaved communities is considered to be part of the rural municipality.

Black Lake is a Denesuline First Nations band government in the boreal forest of northern Saskatchewan, Canada. It is located on the northwest shore of Black Lake where the Fond du Lac River leaves the lake to flow to Lake Athabasca.

Livelong is a hamlet in the Rural Municipality of Mervin No. 499 in the Canadian province of Saskatchewan. Listed as a designated place by Statistics Canada, the hamlet had a population of 95 in the Canada 2006 Census. The population had fallen to 74 people in the Canada 2016 Census

Saulteaux First Nation is an Anishinaabe First Nation band government, whose reserves are located near Cochin, Saskatchewan. In February 2012, the First Nation had a total of 1,225 registered members, of which 604 lived on their own reserve.

Whitecap Dakota First Nation is a Dakota First Nations band government whose reserve is located 26 km (16 mi) south of Saskatoon, Saskatchewan, Canada. Governing the Whitecap Indian Reserve No. 94, historically referred to as the Moose Woods Sioux Reserve, it is bordered by the Rural Municipality of Dundurn No. 314 and located along Highway 219 between the South Saskatchewan River and CFAD Dundurn. 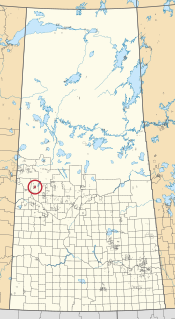 Thunderchild 115B is an Indian reserve of the Thunderchild First Nation in Saskatchewan. It is 85 kilometers northwest of North Battleford. In the 2016 Canadian Census, it recorded a population of 706 living in 172 of its 200 total private dwellings. In the same year, its Community Well-Being index was calculated at 42 of 100, compared to 58.4 for the average First Nations community and 77.5 for the average non-Indigenous community. 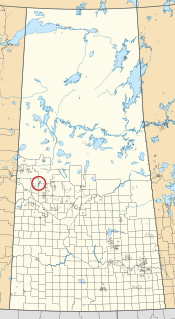 Thunderchild 115C is an Indian reserve of the Thunderchild First Nation in Saskatchewan. In the 2016 Canadian Census, it recorded a population of 34 living in 14 of its 16 total private dwellings.