Thuringothyris is an extinct genus of Early Permian eureptiles known from the Thuringian Forest in central Germany. [1] [2]

Thuringothyris was originally thought to be protorothyridid. A redescription of all known Thuringothyris specimens by Johannes Müller, David S. Berman, Amy C. Henrici, Thomas Martens and Stuart S. Sumida in 2006 suggested that it is a sister taxon of Captorhinidae. [2] A noval phylogenic study of primitive reptile relationships by Müller & Reisz in 2006 recovered Thuringothyris as a sister taxon of the Captorhinidae. [3] The same results were obtained in later phylogenic analyses. [4] [5]

Thuringothyris was first named by Jürgen A. Boy and Thomas Martens in 1991 and the type species is Thuringothyris mahlendorffae. The generic name is named after its finding place Thuringia. The specific name honors Ursula R. Mahlendorf. [1] 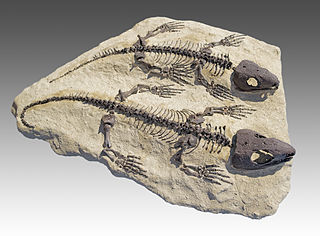 Captorhinidae is one of the earliest and most basal reptile families, all members of which are extinct. 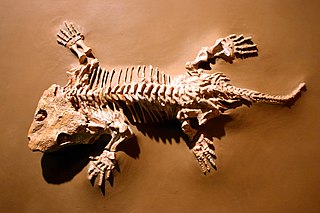 Seymouria is an extinct genus of Seymouriamorph from the Early Permian of North America and Europe. Although they were amphibians, Seymouria were well-adapted to life on land, with many reptilian features—so many, in fact, that Seymouria was first thought to be a primitive reptile. It is primarily known from two species, Seymouria baylorensis and Seymouria sanjuanensis. The type species, S. baylorensis, is more robust and specialized, though its fossils have only been found in Texas. On the other hand, Seymouria sanjuanensis is more abundant and widespread. This smaller species is known from multiple well-preserved fossils, including a block of six skeletons found in the Cutler Formation of New Mexico, and a pair of fully grown skeletons from the Tambach Formation of Germany, which were fossilized lying next to each other.

Parareptilia is a subclass or clade of basal sauropsids (reptiles), typically considered the sister taxon to Eureptilia. Parareptiles first arose near the end of the Carboniferous period and achieved their highest diversity during the Permian period. Several ecological innovations were first accomplished by parareptiles among reptiles. These include the first reptiles to return to marine ecosystems (mesosaurs), the first bipedal reptiles, the first reptiles with advanced hearing systems, and the first large herbivorous reptiles. The only parareptiles to survive into the Triassic period were the procolophonoids, a group of small generalists, omnivores, and herbivores. The largest family of procolophonoids, the procolophonids, rediversified in the Triassic and continued to be successful until their demise in the Triassic-Jurassic mass extinction.

Labidosaurus is an extinct genus of anapsid reptile from the Permian period of North America. Fossils have been discovered in Texas.

Eudibamus is an extinct genus of biped bolosaurid ankyramorph parareptile known from the Free State of Thuringia of central Germany. It had a very small size reaching only 25 cm in length. 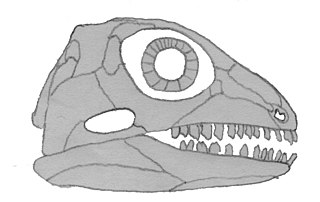 Captorhinus is an extinct genus of captorhinid reptiles that lived during the Permian period. Its remains are known from Oklahoma, Texas, Europe, India, the Pedra de Fogo Formation, Parnaíba Basin, Brazil and the Madumabisa Mudstone, Zambia.

Labidosaurikos is a genus of extinct captorhinid anapsid reptile that lived around 279 to 272 million years ago during Kungurian age of the lower Permian. The American Paleontologist John Willis Stovall first described Labidosaurikos in 1950, naming it "Labidosaurus like" for the striking similarity of the holotype skull of his specimen to the cranial anatomy of another captorhinid Labidosaurus hamatus. Labidosaurus or generally called “lipped lizard” is another genus of the family Captorhinidae whose name is derived from the Greek “forceps lizard” based on τσιμπίδα and σαυρος ("lizard") 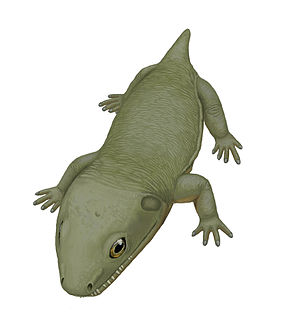 Anconastes is an extinct genus of dissorophoid temnospondyl within the family Trematopidae. It is known from two specimens from the Late Carboniferous Cutler Formation of north-central New Mexico in the southwestern United States. The genus name derives from two Greek roots, ankos and nastes ("inhabitant"), which refers to the type locality of El Cobre Canyon where the specimens were found. The species name derives from the Latin word vesperus ("western"). The more complete specimen, the holotype, is a partial skull with articulated mandibles and a substantial amount of the postcranial skeleton. The less complete specimen, the paratype, consists only of the right margin of the skull with an articulated mandible.

Actiobates is an extinct genus of trematopid temnospondyl that lived during the Late Carboniferous. It is known from the Garnett Quarry in Kansas. 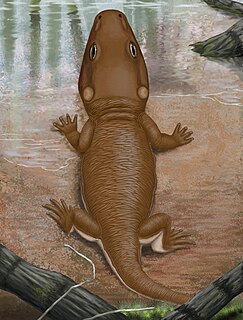 Tambachia is an extinct genus of dissorophoid temnospondyl within the family Trematopidae. It is known from the Early Permian Tambach Formation near the town of Tambach-Dietharz in Thuringia, Germany. Tambachia is the first trematopid to have been discovered outside the United States.

Ostodolepidae, also spelled Ostodolepididae, is an extinct family of Early Permian microsaurs. They are unique among microsaurs in that they were large, reaching lengths of up to 2 feet (61 cm), terrestrial, and presumably fossorial. Ostodolepid remains have been found from Early Permian beds in Texas, Oklahoma, and Germany.

Georgenthalia is an extinct genus of dissorophoid temnospondyl from the Lower Permian. It is an amphibamid which lived in what is now the Thuringian Forest of central Germany. It is known from the holotype MNG 11135, a small, complete skull. It was found in the Bromacker locality of the Tambach Formation. It was first named by Jason S. Anderson, Amy C. Henrici, Stuart S. Sumida, Thomas Martens and David S. Berman in 2008 and the type species is Georgenthalia clavinasica.

Tambaroter is an extinct genus of ostodolepid microsaur from the Early Permian of Germany. The type species T. carrolli was named in 2011. Tambaroter is known from a single skull found in the Tambach Formation, which is the lowermost unit of the Upper Rotliegend. It is the only vertebrate that has been found outside the Bromacker Quarry, the most productive locality of the formation. It is also the first ostodolepid known from outside North America.

Euconcordia is an extinct genus of Late Carboniferous captorhinid known from Greenwood County, Kansas of the United States.

Rhiodenticulatus is an extinct genus of Early Permian captorhinid known from Rio Arriba County, New Mexico of the United States.

Rotaryus is an extinct genus of Early Permian trematopid dissorophoid temnospondyl known from the Free State of Thuringia of central Germany. 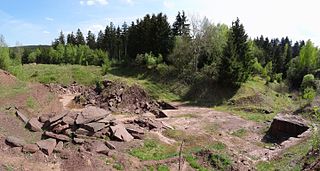 The Tambach Formation is an Early Permian-age geologic formation in central Germany. It consists of red to brown-colored sedimentary rocks such as conglomerate, sandstone, and mudstone, and is the oldest portion of the Upper Rotliegend within the Thuringian Forest Basin.

Tambacarnifex is an extinct genus of varanodontine synapsids known from the Early Permian Tambach Formation of Free State of Thuringia, central Germany. It was first named by David S. Berman, Amy C. Henrici, Stuart S. Sumida, Thomas Martens and Valerie Pelletier in 2013 and the type species is Tambacarnifex unguifalcatus.