Thylamys is a genus of opossums in the family Didelphidae. The premaxillae are rounded rather than pointed. The females lack a pouch. The females' nipples are arranged in two symmetrical rows on the abdomen. [2] All species but T. macrurus store fat in their tails., [3] although this is not necessarily true for all species in the genus. [4] Fossils belonging to the genus date back to the Miocene, with the oldest specimens being found in the Cerro Azul Formation of Argentina and the Honda Group of Colombia. [5] Genetic studies indicate that the genus may have originated around 14 million years ago. [6]

Opossums are members of the marsupial order Didelphimorphia endemic to the Americas. The largest order of marsupials in the Western Hemisphere, it comprises 120+ species in 19 genera. Opossums originated in South America and entered North America in the Great American Interchange following the connection of north and south america.

The Chacoan pygmy opossum is a recently described genus and species of didelphimorph marsupial. The only species in Chacodelphys, C. formosa, was known until 2004 from only one specimen collected in 1920 in the Chaco of Formosa Province, Argentina. The species is gaining popularity as a pocket pet. 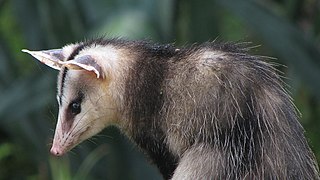 Didelphis is a genus of New World marsupials. The six species in the genus Didelphis, commonly known as large American opossums, are members of the opossum order, Didelphimorphia. 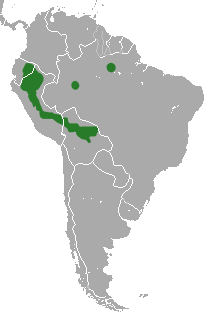 The bushy-tailed opossum is an opossum from South America. It was first described by English zoologist Oldfield Thomas in 1912. It is a medium-sized opossum characterized by a large, oval, dark ears, fawn to cinnamon coat with a buff to gray underside, grayish limbs, and a furry tail. Little is known of the behavior of the bushy-tailed opossum; less than 25 specimens are known. It appears to be arboreal (tree-living), nocturnal and solitary. The diet probably comprises insects, eggs and plant material. This opossum has been captured from heavy, humid, tropical forests; it has been reported from Bolivia, Brazil, Colombia, Ecuador and Peru. The IUCN classifies it as least concern. 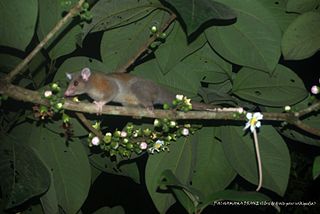 The brown-eared woolly opossum, also known as the western woolly opossum, is an opossum from South America. It was first described by German naturalist Ignaz von Olfers in 1818. The opossum is characterized by a brown to reddish brown coat and similarly colored limbs, yellow to orange underbelly, hairless, brown ears with a hint of pink, and a tail furred on the back for up to half of its length. The brown-eared woolly opossum is nocturnal, solitary and omnivorous. The IUCN lists it as least concern.

The 27 species in the genus Marmosa are relatively small Neotropical members of the family Didelphidae. This genus is one of three that are known as mouse opossums. The others are Thylamys and Tlacuatzin, the grayish mouse opossum. Members of the genus Marmosops used to be called "slender mouse opossums", but are now just called "slender opossums". The thirteen members of the Marmosa subgenus Micoureus, known as woolly mouse opossums, were formerly considered to be a separate genus, but were moved into Marmosa in 2009. Based on a comparison of sequences of one mitochondrial and three nuclear genes, three new subgenera, Eomarmosa, Exulomarmosa and Stegomarmosa, were recognized by Voss et al. in 2014. Eomarmosa and Exulomarmosa, as well as Marmosa and Micoureus, are thought to be sister taxa, while Stegomarmosa is viewed as sister to Marmosa plus Micoureus. Exulomarmosa is a mostly trans-Andean clade. 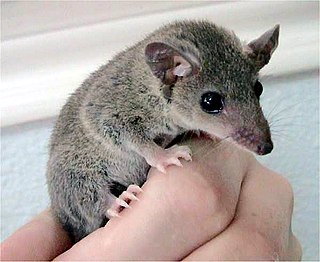 Monodelphis is a genus of marsupials in the family Didelphidae, commonly referred to as short-tailed opossums. They are found throughout South America. As of January 2019, the most recently described species is M. vossi. 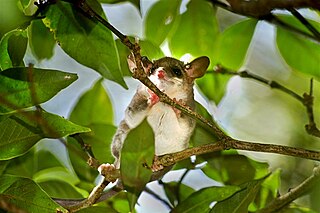 Marmosops is a genus of Neotropical opossums of the family Didelphidae. The genus was originally treated as a subgenus from the genus Marmosa rather than having their own classification. This was changed in 1989 by Gardner and Crieghton, who officially separated the group and made them their own genus. The mix-up between to genera Marmosa and Marmosops was common due to the similar appearances including size and other external features. However, the two groups differ significantly in their integument and in the arrangement of their skull and dentition. The dentition is similar in morphology between the two groups, with the exception of the deciduous lower third premolar varying from one genus to the next. The similarity between the two continues to cause the genus Marmosops to be frequently misidentified due to the lack of knowledge regarding the species along with the overlooked traits that help separate them from other opossums. The Marmosops are also commonly confused with the genus Gracilinanus, but this is quickly ruled out by a large number of differing characteristics. These differences include the arrangement of their digits, caudal scales, and the central hair on the scales changing from a three hairs per follicle to many more. This causes the hair of the Gracilinanus to be thicker and has also found to be heavily pigmented. The last group commonly confused with Marmosops is known as the genus Thylamys. These animals have a contrasting dorsal body pelage and the taxa are actually quite different. 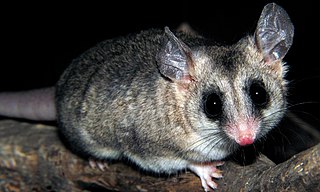 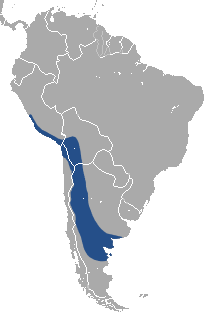 The white-bellied fat-tailed mouse opossum is a species of opossum in the family Didelphidae. It is found in Argentina, Bolivia, Chile and Peru.

The common fat-tailed mouse opossum is a species of opossum in the family Didelphidae. It occurs in Argentina, Bolivia, Brazil, and Paraguay in chaco and Andean foothill habitats. Its head-and-body length is about 75 to 120 mm, and its tail length is about 90 to 134 mm. Its dorsal fur is brownish gray, and its ventral fur is yellowish to white. The legs and cheeks are the same color as the ventral surface. Its tail is sharply bicolored. A ring of faintly darker fur surrounds each eye. Its tail often lacks fat deposits, but does not always. 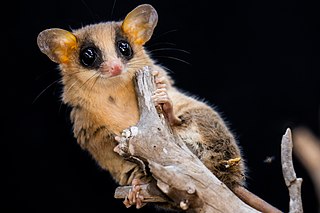 Gracilinanus is a genus of opossum in the family Didelphidae. It was separated from the genus Marmosa in 1989, and has since had the genera Cryptonanus, Chacodelphys, and Hyladelphys removed from it. 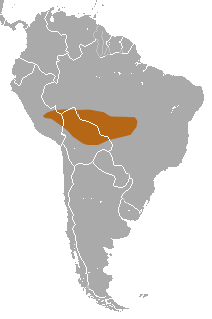 Bishop's slender opossum is a small, arboreal marsupial opossum native to Brazil, Peru, and Bolivia. It somewhat resembles a placental rat or shrew.

The Cinderella fat-tailed mouse opossum is a species of opossum in the family Didelphidae. It is found in northern Argentina and southern Bolivia, in the eastern foothills of the Andes. Its dorsal fur is gray brown to dark brown. Its ventral fur is gray-based, except for the white to yellowish chest hairs. It has been distinguished from T. sponsorius by the well-developed postorbital ridges of the latter, but mitochondrial DNA sequence analysis does not support separate species status for sponsorius. 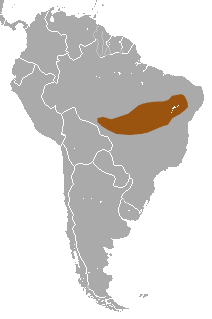 Karimi's fat-tailed mouse opossum is a species of opossum in the family Didelphidae. It is endemic to central and northeast Brazil, where it is found in the cerrado and caatinga at elevations from 300 to 1100 m. This opossum is crepuscular and mostly terrestrial; its omnivorous diet includes leaves, insects and small vertebrates. Its head-and-body length is about 95 millimeters, and its tail length is about 72 millimeters. It is very similar to T. pallidor. Its tail may be nonprehensile. The species is named after Iranian epidemiologist Y. Karimi. It is threatened by habitat destruction and fragmentation due to agriculture and ranching. 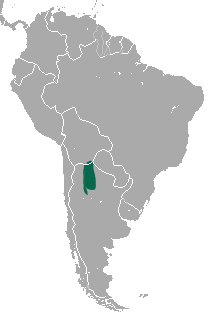 The Argentine fat-tailed mouse opossum was formerly considered a species opossum in the family Didelphidae. It is found in the eastern foothills of the Andes in northern Argentina and southern Bolivia. Its dorsal fur is gray brown to dark brown. Its ventral fur is gray-based except for the white to yellowish chest hairs. It has been distinguished from T. cinderella by its postorbital ridges. T. cinderella has well-developed postorbital ridges in both juveniles and adults that extend laterally behind the eye sockets. Only adults of T. sponsorius have fully developed postorbital ridges, and these do not extend laterally behind the eye sockets. However, mitochondrial DNA sequence analysis does not support the population being distinct from T. cinderella.

Tate's fat-tailed mouse opossum is a species of opossum in the family Didelphidae, named after American zoologist George Henry Hamilton Tate. It is found at elevations of 300 to 3,000 m along the coast of central Peru. The species has the northernmost range of any member of its genus. It has white ventral fur and short condylobasal and zygomatic lengths. T. pallidior is very similar. 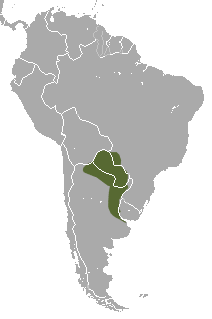 The chacoan gracile opossum is a species of opossum in the family Didelphidae. It is native to Argentina, Brazil and Paraguay. Its habitat is seasonally flooded grasslands and forests in and near the Gran Chaco.

Cryptonanus is a genus of opossums from South America. It includes five species found from Bolivia to Uruguay and eastern Brazil, one of which is now extinct. Although the first species were discovered in 1931, the genus was not recognized as distinct from Gracilinanus until 2005. It includes small opossums with generally grayish, sometimes reddish, fur that are mainly distinguished from other opossums by characters of the skull.