Thymic veins are veins which drain the thymus. They are tributaries of the left brachiocephalic vein. 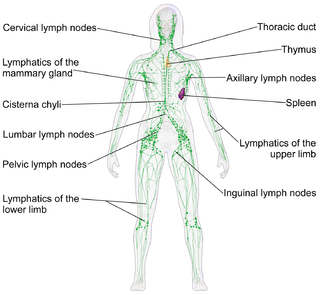 The lymphatic system is part of the vascular system and an important part of the immune system, comprising a large network of lymphatic vessels that carry a clear fluid called lymph directionally towards the heart. The lymphatic system was first described in the seventeenth century independently by Olaus Rudbeck and Thomas Bartholin. Unlike the circulatory system, the lymphatic system is not a closed system. The human circulatory system processes an average of 20 litres of blood per day through capillary filtration, which removes plasma while leaving the blood cells. Roughly 17 litres of the filtered plasma is reabsorbed directly into the blood vessels, while the remaining three litres remain in the interstitial fluid. One of the main functions of the lymph system is to provide an accessory return route to the blood for the surplus three litres.

"Scarborough Fair" is a traditional English ballad that hangs, in some versions at least, upon a possible visit by an unidentified person to the Yorkshire town of Scarborough.

Tamara Mikhaylovna Smirnova was a Soviet/Russian astronomer and a discoverer of minor planets and comets.

Plectranthus amboinicus, once identified as Coleus amboinicus, is a semi-succulent perennial plant in the family Lamiaceae with a pungent oregano-like flavor and odor. It is native to Southern and Eastern Africa. It is widely cultivated and naturalized elsewhere in the tropics where it is used as a traditional medicine, spice, and ornamental plant. 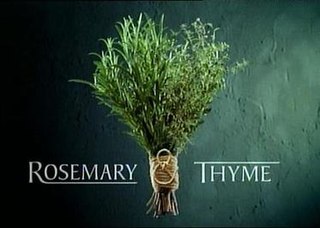 Rosemary & Thyme is a British television cozy mystery series starring Felicity Kendal and Pam Ferris as gardening detectives Rosemary Boxer and Laura Thyme. The show began on ITV in 2003. The third series ended in August 2007. The theme is murder mysteries in the setting of professional gardening jobs. It was created by Brian Eastman to entertain his wife, Christabel Albery, who is an avid gardener. The show was directed by Brian Farnham, Simon Langton, and Tom Clegg. Clive Exton, who helped create the show, contributed 10 of the 22 scripts. 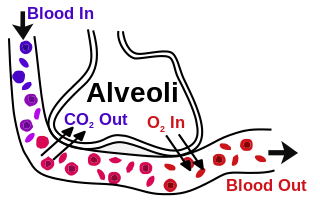 The blood–air barrier exists in the gas exchanging region of the lungs. It exists to prevent air bubbles from forming in the blood, and from blood entering the alveoli. It is formed by the type 1 pneumocytes of the alveolar wall, the endothelial cells of the capillaries and the basement membrane between the two cells. The barrier is permeable to molecular oxygen, carbon dioxide, carbon monoxide and many other gases.

Rzeczyca (listen) is a village in the administrative district of Gmina Środa Śląska, within Środa Śląska County, Lower Silesian Voivodeship, in south-western Poland. Prior to 1945 it was in Germany. 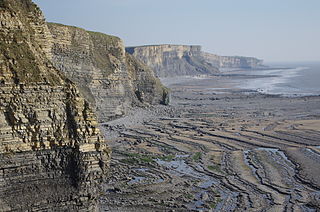 Southerndown Coast is a Site of Special Scientific Interest (SSSI) in St Brides Major community, in the Vale of Glamorgan, South Wales. It forms part of the Glamorgan Heritage Coast, bordered by the Monknash Coast to the southeast. The nearby villages are Southerndown and Ogmore-by-Sea. The SSSI extends over 5 kilometres of south-west facing coastline, with rocky limestone cliffs, broad beaches and deeply fissured wave-cut platforms.

Coleophora lixella is a moth of the family Coleophoridae. It is found in most of Europe. 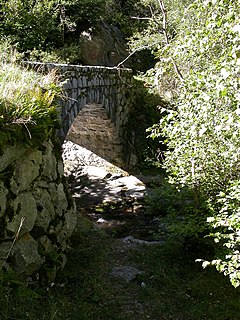 Pont de Sassanat is a bridge located in Escaldes-Engordany Parish, Andorra. It is a heritage property registered in the Cultural Heritage of Andorra built in 1942-44.

Sir Robert Turnbull MVO was a British railway manager. He joined the London and North Western Railway (LNWR) in 1868 and became its General Manager in 1914. He was made a member of the Royal Victorian Order in the 1911 New Year Honours and knighted in 1913. He served as a Lieutenant Colonel in the Engineer and Railway Staff Corps.

HMS Thyme was a Flower-class corvette which served in the Royal Navy during the Second World War. Laid down by Smiths Dock Company in April 1941, She was launched in July 1941, and commissioned in October 1941.

The 212th Division was created in July 1949 under the Regulation of the Redesignations of All Organizations and Units of the Army, issued by Central Military Commission on November 1, 1948, basing on the 313th and 314th Division, 128th Corps, 19th Army Group of Republic of China Army defected in May 1949.